Maximize the Odds - Use Multiple Presentations

My good friend Ayr Miller dropped by last weekend. He had just came back from a trip to Calling Lake and the fishing was as good as ever. He proudly displayed a mixed bag of pike, perch, walleye and burbot. That was enough to right then and there to change my fishing plans from a return trip to Miller Lake, where the rainbows had been biting like gangbusters, and make way to the promise land of Calling. It also meant changing all my tackle over to get set up for walleye, pike, perch, burbot and whitefish.

That said, the night was long and the morning came early, but near first light, Ayr, several friends and I found ourselves on Calling, dropping jigs and minnows in the early morning light. In minutes rods were going off and in short order we landed two plump walleye, plus a very good pike. 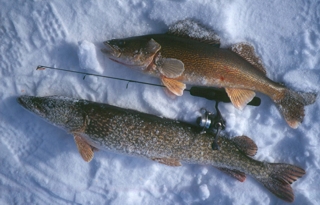 By then, the last of the morning bite tapered off and it was a complete and total shut down. Seeing the light, we pointed the jeep deeper, found some thirty plus feet of water and started jigging for perch. While the bite wasn't fast and furious, it was steady and over the course of a few hours we had a decent pile of keeper size fish. We also bonused another pike, a burbot and a tiny walleye. Things were looking up. We had heard plenty of rumors about the heavy and hard whitefish action in the deep water of Calling with Wetaskiwins, but that day we didn't see them. 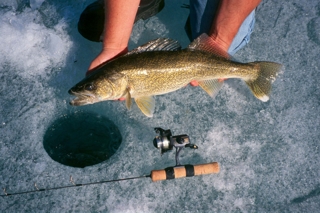 Seeing them being the operative word. I had brought the Aqua Vu along and we could watch every single perch come in and take our hooks. It was quite fun and made us far more effective as anglers. A little wiggle, a lift, another wiggle and the perch would smack it. 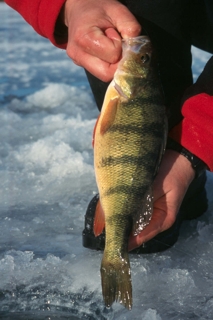 As the sun started to dip low on the horizon, it was time to head back shallower, so we returned to the holes we drilled in the morning. The water depth was anywhere from seven to ten feet and as the light began to fade, the bite picked up. We hit several more walleye, a pike, and more burbot. The fishing was great and it showed us that being flexible and changing up our location and presentations were the ticket to filling up the day with some good fishing. It was a good trip to be out on Calling and I'm positive I'll be going back. 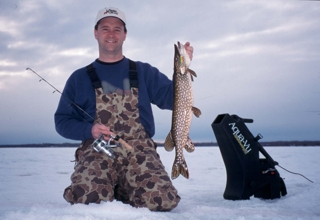 But sometimes when I head out fishing, I find myself sticking it out in one location rather than moving. This is especially true for the whitefish, which like to hang in and near weeds. 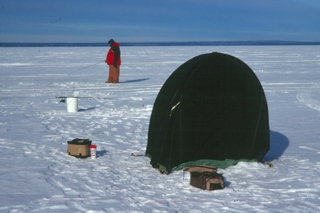 I had my mind set on catching some of the feisty whites of Gull Lake and on this day, Melanie joined me. We hit the lake at first light and while we saw whites, we could scarcely get a fish to commit. After going through the entire morning period to around noon without a whitefish, I dug into the trunk, pulled out a couple tip ups and put down some anchovies. Considering the whitefish bite had long since dried up, I figured, "As long as we were fishing, we may as well try to catch some pike." The weedline we were fishing looked promising and it made sense that the odd pike would patrol the weedline looking for a whitefish or perch.

The tip ups hadn't been set more than a few minutes when a flag sprung to the air. We rushed over, only to see the fish had dropped the bait. With the rig reset, the tip up sprang to life and on this go round Mel connected and brought a decent sized pike to the ice. The tip ups provided steady action, then sometime around three, both tip ups went off. I got on one and on the other Mel was solidly hooked up into a fish. I saw the size of my fish and yelled over "I've got a good one Mel," to which she replied, "I've got a real big one on, I can see him twisting below the ice." I was able to bring mine to the ice and then went over to help Mel. We landed both fish and they were beauties. Mine was 10.3 lbs on the digital scale, while Mel's went 11.6. Excellent fishing, all made possible because we brought alternate gear, which in this case made the day. 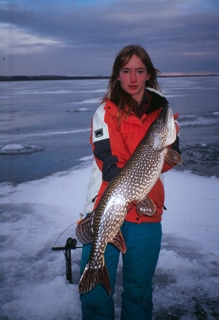 Those lakes that contain pike, whitefish, walleye, perch and burbot are prime candidates for this style of fishing. Just be sure to bring a multitude of outfits and presentations. You never know what will work, but I've always found that catching fish is a whole lot of fun, even if it is 10 pound plus pike instead of the two pound whitefish I was hoping to catch.