Fishing at last ice continues to get better while the ice conditions get worse. Trout, especially rainbow trout, are on a big feed at last ice and often they can be caught throughout the day with heavier action during the low light periods. It is one of the few times I can look down and see numbers of trout moving through my ice fishing hole making it a better opportunity to nymph up a few bites. 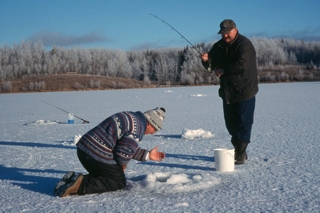 If you've never tried fly fishing through the ice, last ice is a great time to catch a bunch of rainbows utilizing a half dozen flies. Half are finesse and half are the opposite. Many of you that read the website will already know that I have great success dropping down a small bead head pheasant tail nymph, bead head prince nymph or bead head shrimp, either as is, or under a bobber if the water's murky. These flies not only work for trout, but they're also great for catching whitefish and perch. While those flies work exceptionally well throughout the ice-fishing season, with the coming of spring, the addition of some bigger flies is warranted. Trout are more active at last ice and will readily take a bigger offering. 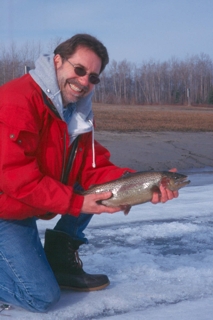 Because of this, I add the black bead head wooly bugger, the full back nymph, the wooly worm and the double shrimp to my ice flies. These are bigger flies and I'll typically use them in sizes 6 and 8. The trout have no problem coming over and sucking them up when given the opportunity. The best way I find to fish them is to tie them direct to the line with nothing else. No weight and no bait. I'll then twist the knot that's tied to the hook eye and pull it over towards the point of the hook so that the fly orients itself horizontally in the water. This way it looks most natural. After that I'll drop it down, where it will begin a slow decent to the bottom. When and if it gets there I'll slowly, ever so slowly bring it back up. Most trout will hit this fly as it just goes under the ice or on the rise.

I pay attention to where the hits come, because trout often pattern themselves from day to day and a few bites in the same area will allow me to zone in on the proper depth. 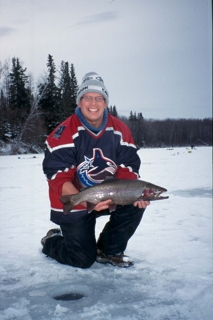 Beyond the flies, I'll use a second rod and drop down a setline with a half a trout worm 30 feet away. This will double my fishing efforts and often times it will more than double my catch. Live bait always has an appeal. And if huge trout are my target, I'll move over to using frozen minnows where legal or, if they are not legal, I'll put down a sinking Rapala and jig it. The jigging action of a minnow plug on the bottom is often much more than a big rainbow can take. After the strike all I can say is good luck on landing it. With a plug there are two sets of trebles and often one set will be exposed where it can and will catch the bottom edge of the ice fishing hole during those last frantic seconds of trying to pull it up an out. I've broken off several times right at the bottom edge of the hole, but what can I say; it's all part of the fun.

As for specific location, expect to find a lot of rainbows in tight, especially during low light where it is the norm to be catching good fish in a few feet of water or less. Just be careful with the ice auger, as it's easy to drill too shallow and hit the sand, rocks or even mud, effectively dulling the blades. Most of my trout fishing, however, will be done in ten feet or less, even during the bright of day. My preferred spot is to set up on weedlines. I'll find the outside edge of a visible weedline or drop off have been my most consistent producers and when I find one, I set up shop and call it home for the day. 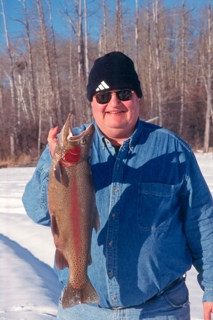 While fishing will be fair to good throughout the day, there is almost always a strong and dependable bite at first light and at last light, so if you only have half a day to go out, try to be on the ice for one or the other.

Ice fishing for rainbow fishing will remain strong right through to the final days when it gets too mushy to venture out. And when that happens, hey, it's only a couple weeks to open water and the beginning of another great season. 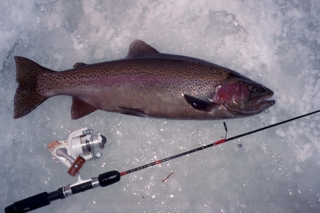