The month of September and on into October is the absolute best time to hunt huge pike. These fish are putting on the feed bag before freeze up and they get supercharged. Get an overcast day with a light chop and you’ve hit dream conditions. Fast moving plugs or jerk baits fished high in the water column will attract massive pike after massive pike. How big is massive? Typical fish are 6 – 12 pounds depending on the lake and every second or third outing I’ll hit something bigger, in the 15 – 20 pound range. 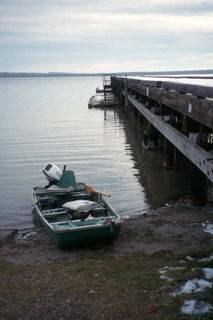 My style of fishing is the run and gun approach. I look for a lake’s best spots then hit them hard and fast. When pike are aggressive there is nothing that’s too fast or too big. With that in mind, my preferred pike bait is the Suick plug. It’s a 9 inch wooden jerk bait that kind of resembles a hockey stick, but most importantly, it gets big pike to respond. This is the one lure that I have caught most of my 40 inch plus pike on. If you’re thinking of trying a Suick, you’ll need a good stiff rod and, at minimum, 14 pound test and preferably 20 pound or more. These are heavy lures that require stiff rods and tough line to work them well.

The stiff rod is necessary to impart the snapping, or jerking action. Jerk baits have no built in action, which means I have to snap the rod forward to give it life. They are also available in a seven inch version which also work well on pike. The advantage of the seven inch model is its size. It’s easier to cast, retrieve and work through the water. I would still, however, recommend the 9 inch model for very large fish. It’s just a meatier profile that attracts lots of attention. 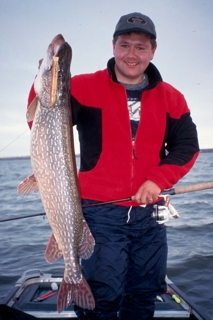 Overcast days are definitely preferred and the absolute best time of day is just as the sun starts to set. With the sun low on the horizon the larger pike push shallow to feed. I like to fish over and near weeds, the green healthy ones where pike like to feed. I normally concentrate on water 10 feet deep or less and am rarely disappointed. With the onset of fall, water temperatures drop to the comfort zone of the big pike which explains why they can be found feeding aggressively in shallow water.

I had my dad come for a visit several falls ago and he said, “I’d like to go catch some of those 20 pound pike I see in your pictures.” That was a pretty tall order because, quite frankly, 20 pound pike are fairly rare and don’t bite all that often. I agreed to take him out and we’d see what happens. We went to Wabamum lake and he put on a Salmo whitefish lure, which happens to be the pikes preferred forage at Wab. It wasn’t long before he tagged a supercharged torpedo of a pike that pushed the tape to 40 inches and was closing in on 15 pounds. I was pleased and figured we’d caught the big fish of the day, but it wasn’t to be. We stayed into the evening and in the fading light my dad put on a full sized Suick and it got hammered hard.

Buckets of water sprayed everywhere. My dad took his time playing this massive fish and when it came to rest beside the boat it literally was a tank. We took a measurement. It was 43 inches and monstrously thick ranking right up there as one of the biggest pike I’ve seen caught. I took a quick photo and we sent her back. I shook my head and grinned. He wanted a 20 pounder and he got all that plus some.

I mentioned earlier that ideal conditions are overcast with a slight chop and fading light. Not all of us get to fish those conditions, myself included. To catch big pike in mid day under the blazing sun it’s all about going to the fish. At this time many will be found in or near those same green weedbeds and you need to use a little deeper and slower approach. I still fish under ten feet, but rather than working the top of the water column, I’ll use the fire tiger Rapala Husky Jerk and dive down to meet them. The Husky Jerk is a suspender, so when it dives down, it stays down and in the strike zone. This is how I beat the heat and the shine of a sunny day. Lately I’ve gotten into casting big streamers used for salmon on the coast (bucktails), with my spinning rod. I attach a big splitshot a couple feet up and cast it out and twitch the rig along bottom. I’m excited to say that it’s doing a number on the pike. I’ve yet to break a 20 with this rig, but I’ve popped several that pushed fifteen pounds and tons of smaller ones. It’s got me to thinking, “if I put together a massive whitefish looking fly...” I bet that’ll catch them. 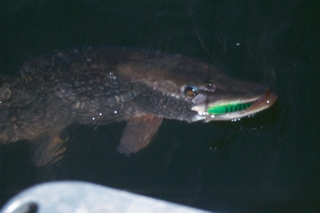 The great thing is that fall and great pike fishing is nearly upon us. Set some time aside in the coming month and head to your favourite pike lake for some of the best action and hottest fishing of the year.