Many fly fishers overlook the importance of terrestrials, land born insects included in the trout’s diet, as an excellent imitation for fly fishing. With over one million known species these insects play a large part in the trout’s world. Most anglers know about grasshoppers and like to fish them because they are easy to see on the water and trout feed on them very aggressively. The imitations are easy to see, can and should be presented with a splat and the leaders can be stout. This is what makes them easy and fun to fish. Other dry flies call for finer leaders and tippets, need to be presented delicately and can be difficult to see on the water. When it comes to other terrestrials such as ants and beetles, most anglers kind of shrug and admit to not having much experience with them. Unlike aquatic insects, terrestrials, especially ants and beetles, don’t have a hatch period that limits their availability as food for trout. Also terrestrials are not meant to be on the water and make an easier meal than aquatic insects. Terrestrials live in and feed on green trees, plants and grasses. They are very poor flyers and it is inevitable that many of them end up in the water. This, of course, is good news for both the fish and the fisherman. You can fish terrestrials during the day or night all year around using dry fly or nymphing gear. 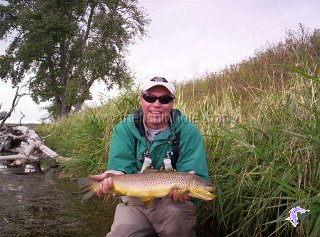 Grasshoppers are appreciated by both trout and anglers when they are present along rivers and streams during what has been dubbed “hoppertunity” time. These large insects fly poorly and swim even worse. When they land on the water with a splat and start their struggle to free themselves it’s like the dinner bell for trout making them easy pickings for a big meal. Grassy banks and windy conditions combine to send these juicy morsels into the water. Hopper years vary in importance based on early season conditions but even in cool, wet years, like this year in Alberta, there will always be some hoppers available for trout to dine on. One of the best ways to fish these insects is using what is commonly called a hopper-dropper rig (see tip section), where a small nymph is hung under the hopper. The majority of the fish will eat the nymph, with the hopper acting as a strike indicator, but they will also take the hopper at times. If you are going to fish with an indicator it might as well have a hook in it. I like to use a shorter, stiffer leader for hopper fishing. This is usually a 7.5’ 2X leader as these large bushy flies tend to twist the longer, finer leaders associated with dry fly fishing. They also aid in roll casting, which since you are not concerned with a delicate presentation is a very effective way of covering large amount s of water with little effort. 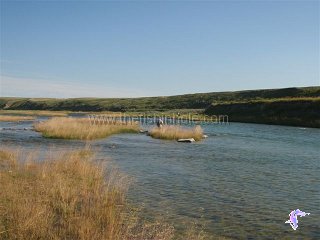 Ant patterns have saved the day for me many a time. I remember one time fishing B.C.’s Michelle Creek for its large cutthroats. It was fall and the leaves that had turned colour were being blown off the trees and into the creek. This, combined with very little action from our usual dry fly methods was making for a very slow day of fishing. I was getting close to putting on a nymph, which in cutthroat fishing is bordering on sacrilege as far as I’m concerned. Tying on a parachute ant pattern saved the day as cutthroat after cutthroat came to the fly as if they had been waiting for them all day. Windy days are good days to fish ants as, just like hoppers, during their daily routine they get blown off of the log they’re walking along and end up in the water making an easy, tasty treat to the trout. The tasty part I cannot personally verify but I have read that some anglers have actually, in the name of science of course, tasted ants. The reports are that they have a slightly acidic, bitter taste, which obviously appeals to the trout’s taste buds. Another ant incident that didn’t work out as well happened to me on the famous Henry’s Fork of the Snake River in Idaho. We were fishing the Railroad Ranch section of the river known for its notoriously fussy rainbows when a flying ant “hatch” began. Fish were rising all around us and we threw every ant pattern that we had at them to no avail. A quick trip into the local fly shop provided the perfect imitation black ant with white wings, but as you guessed by the time we got back on the water the action had stopped. There were now no rising fish to be seen anywhere on this stretch of the river. We tied on our new purchases and half heartedly tossed them into areas where, less than an hour ago, fish were gorging themselves. Our offerings were soundly ignored. Ants will work well when nothing else is hatching but for some reason, maybe their good taste, trout will often take ants even during heavy hatches of other insects. This is a good tactic for fishing difficult hatches like Tricos which are a very small Mayfly that hatch in great numbers and is often fed on during the spinner fall. At this stage the spent mayflies are laying in the surface film with their wings out to the sides, making the imitation you are extremely difficult to see. At these times, for some reason, using a red flying ant pattern can be extremely effective. It is also a whole lot easier for the angler to see than a Trico imitation. Trout seem to relish this variation from the numerous Tricos and will take the ant pattern quite regularly. 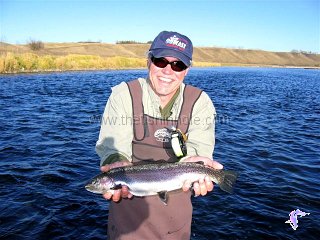 There is somewhere in the neighbourhood of 26,000 species of beetles in North America. Many of these can be found residing along trout streams and like hoppers and ants some of them end up in the water. The biggest problem with beetles is that because of their generally dark colour and low profile the flies we use to imitate them can be very hard to see. A piece of bright yarn or foam tied on to the top of a pattern can help the angler follow his offering on the water. Another effective method is to tie a fly that is more visible and attach a foot long piece of tippet with the beetle pattern tied at the end. This locator fly will help you focus on your fly and even if you can’t spot it precisely, at least you know its location within a one foot radius. You can then set the hook on any rises in that zone. I have had quite a bit of success over the years fishing beetles when nothing else is on the water. Some species will climb trees to eat caterpillars while others like to hang out in cracks and crevices of trees including overhanging logs. All it takes is a little bit of wind and they end up in the water providing an easy meal for a hungry trout. 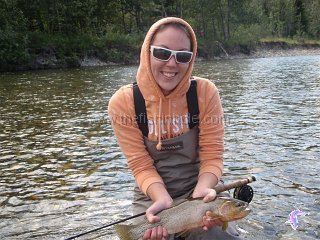 Hoppers, beetles and ants are by no means the only terrestrial insects of importance to the trout angler. Bees, wasps, crickets, moths and caterpillars, amongst others, all find their way into the water at times to become trout food. A well stocked terrestrial fly box will have few of these other patterns but I would never ever be caught on the river without a selection of hoppers, beetles and ants. Remember that Terrestrials end up in the water by accident and very few ever escape so they are at the mercy of the current. Wherever you get converging currents, seams or foam lines there is bound be food. Some of it will very likely be Terrestrials and imitations will provide some great action with explosive takes on hoppers or soft sips for ants and beetles. This is a fishing method that not only is effective all day long but all season long. From early spring until late fall and even in the dead of winter on open water there are terrestrials around, going about their business and occasionally making that fatal step or suicide leap that puts them into the trout and trout fishers world. The next time you are on a stream wanting to use dry flies, but there is little or no insect activity, try a terrestrial pattern. You just might be surprised at how willing the trout are to belly up to the terrestrial bar.