Springtime for the fly fisher can be the “best of times and the worst of times”. Spring brings with it the anticipation of the season ahead, of hungry and eager trout along with the insect hatches that bring them to the surface to feed. It is also a time of unstable weather and high water. While the calendar and the fishing regulations may say that the fishing season is open, Mother Nature can, and often will, say differently. While attempting to fish some rivers and streams at this time of year can be futile, the enterprising fly fisher can usually find somewhere to fish that will shake off what angling writer John Geirach calls the “Shack Nasties”. In Alberta we have what could be considered two run-offs, the first as the weather warms and the ice comes off of the stream banks, surrounding fields, and in the case of rivers such as the Bow, street run melt. The second is when the moisture accumulated in the mountains over the winter is released into the watershed. When high and dirty water hits trout streams many anglers will declare them unfishable and head to their favourite lake. While conditions may not be ideal, trout are still in the water and still have to eat. In fact these high water conditions will actually introduce food into the stream that might otherwise be lacking. Earthworms, ants, beetles, mice and other critters that would normally not be in the water in any number are suddenly introduced into the river by the high water. Stonefly nymphs are a large nymph and are getting active at this time of year. The combination of the higher water and the fact that they are poor swimmers combine to make them available to the trout, and obvious choice for imitation by the angler.

One of the first bugs to get active in the spring, and provide trout with much needed nourishment are what are commonly called stoneflies. These are large aquatic insects that are getting ready to hatch at this time of year. The two main stoneflies in western Canada are the large “Salmon fly” which gets its name from the orange or salmon coloured band between its head and thorax. The other is the golden stone, named for its golden yellow colouring. Stoneflies get their name from their preferred habitat. Clear, clean and highly oxygenated water are necessary for a plentiful stonefly population, therefore streams with lots of rocks and boulders that cause churning up of the water are excellent stonefly habitat. A stonefly nymph removed from the stream and placed in sample dish will start doing “push-ups” to move water through its gills to provide it the necessary oxygen. Stoneflies have a longer nymphal stage than other aquatic insects, from 2-4 years; this makes them one of the best nymph patterns you can use as a searching pattern as they are always available in the streams where they are present. Nymphs should be fished on a dead drift, tumbled along the bottom.

Stoneflies are very poor swimmers preferring to crawl along the rocks. When emerging they migrate to the shore and crawl out onto land to find places to emerge from their nymphal shells, such as rocks, trees, bridge abutments etc. The sight of stonefly shucks on the shore is sure sign the hatch is on. At this time I like to fish my nymph dead drift for the first part of the drift and then impart a little “swing and twitch” at the end of the drift to imitate the migrating nymph.

Stoneflies are easily indentified; they are a large insect, up to 50mm long. They are often carnivorous with claws at the end of their six legs, and have two tails at the of their segmented body. Fly tyers enjoy imitating stoneflies in both their nymph and adult stage. Imitations range from the simplistic to the extremely realistic. I prefer patterns that fall somewhere in the middle, realistic enough to fool the trout yet impressionistic enough to move with the current. Charlie Brooks’ stonefly nymph was tied in “the round”, hackle palmered all around the thorax made the fly look the same from any angle, and is still a very productive pattern. 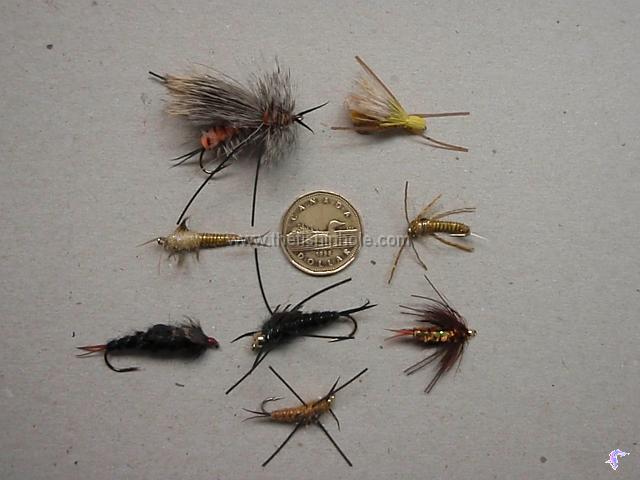 Stoneflies with begin their shoreward migration based on two things, the ratio of daylight to darkness, and on water temperature. Depending on water temperature in Alberta the salmon flies start first in May and are soon followed by the golden stones. The hatch will generally progress upstream as the water temperature normally warms up first on the lower stretches downriver and progresses upstream. After emerging from their shucks, a very impressive sight, salmon flies will spend a little more time on land mating than mayflies, instead of the 24 hour or so that mayflies spend on mating salmon flies will spend several days to a week before mating and returning to the water to deposit their eggs. The return of the female stonefly to the river is an incredibly exciting time for the fly fisher. She will fly along the stream dipping her egg sack into the water to release her eggs and start the next generation. The flight of these bugs has been described as a “helicopter with a drunken pilot” and if you have ever witnessed it that’s a pretty fair description. As the adults return to the water the feeding frenzies that can occur can only be described as gluttonous feeding orgies. For the fly fisher this is a time, much like hopper fishing, where finesse goes out the window. The fly is splatted down in a presentation that screams “dinner is served”! Trout will gorge themselves on these bugs and will continue to feed on their imitations even after the naturals have all but disappeared. At this time fishing can be easier than when the hatch is in full swing as your imitation will have less competition and the fish will remember these tasty morsels. 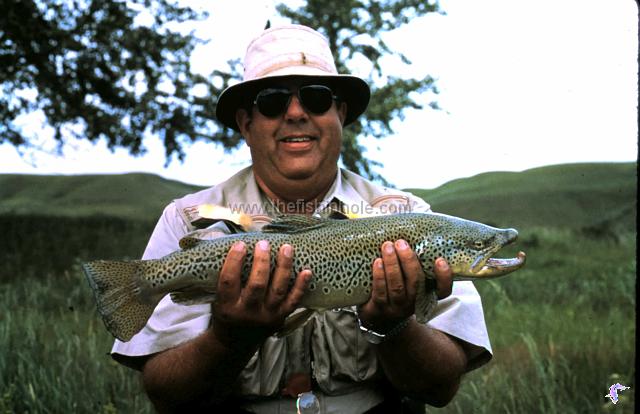 Some waters may look like stonefly water but are not while others won’t but will. In Alberta the Crowsnest River looks like good stonefly habitat and it is, it has good population of both Golden Stones and Salmon Flies. The Bow River has few Salmon Flies but has a very strong Golden Stone population. The South Raven River looks for the most part like poor Salmon fly habitat but has a great hatch. The biggest problem with Salmon flies can be the timing of the hatch, usually it coincides with spring run-off and fishing can be next to impossible. It’s no secret which waters hold good stonefly populations so check with your fishing buddies, read any guides to your local waters and keep your eyes open for the tell tale sign of stonefly shucks in the spring and early summer. This is one hatch you want catch at least once in your life!