Four Seasons of the Bow

One of the advantages of living near the Bow River is that when Mother Nature cooperates you can fly fish year round. The section of river from the W.H.D. weir downstream to the Caresland Weir is opened to angling all year. This in conjunction with the warming influence of the City makes the section of river within Calgary, downstream from the Calf Robe bridge available to the winter angler. There will be interruptions in your season due to cold, wind and high water but for the most part the dedicated angler should be able to fly fish successfully for trout every month of the year on the Bow. You'll have to settle for tying flies at times during the winter, puttering with your tackle during sever run off and suffer through not being able to get much evening fishing in during the shorter days of fall but it's still better than not having any hope of fly fishing at all for several months of the year. 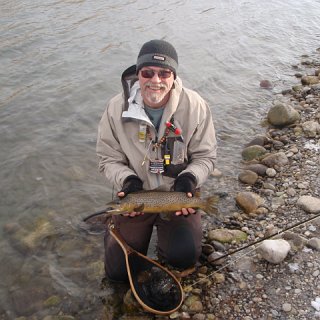 When Mother Nature cooperates winter fishing can be very enjoyable.

Winter fishing on the Bow River

Winter poses the most challenges for several reasons, mostly technical. The fish are still there and still need to eat but getting a fly to them can be tough and on many days impossible. On days when the weatherman cooperates the angler should concentrate on the slower, deeper pools. The fish won't move too far at this time of the year so present your fly as close to the bottom as possible and differ the drift slightly with each pass. I use small nymphs at this time of the year as that is what the fish are used to seeing. The takes will be very gentle with no smashing strikes so the angler must be alert and prepared to strike at the slightest movement of the strike indicator. I like to fish a two nymph rig with enough leader to get to the bottom. My favourite combinations are a San Juan Worm and a Lightning Bug. Other successful nymphs are the usual Hare's Ear, Pheasant Tail and Prince nymphs. Dress for the weather and watch for drifting ice flows when wading as they have a habit of sneaking up on you and catching you behind the knees. Always fish with a partner. What can be a humorous dunking in the heat of summer can be deadly in winter and no trout is worth that. 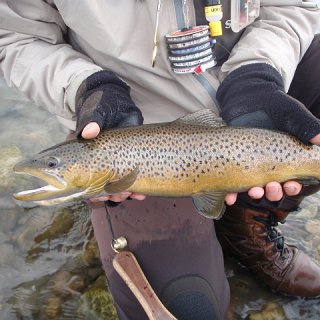 Winter time fishing can be pleasant and rewarding.

Spring fishing on the Bow River

With spring comes warmer, longer days and hopes run high of hatching flies and surface feeding trout. As the water warms the trout start to become active, putting back on some of the weight they have lost during the winter. In mid April of most years many of the Rainbows in the Bow start heading up the Highwood to spawn giving the angler an opportunity to catch more browns than they normally would. Blue Winged Olive mayflies will start to show up at this time and you should look for fish feeding on them in and below riffles where they hatch. In May the Golden Stones will appear and bigger flies, both dry and nymphs will start to produce. During these stonefly hatches a good technique is the dry/dropper combination where you hang a smaller nymph underneath a larger dry stonefly pattern. There are many foam fly patterns tied to represent adult stoneflies to choose from and many of the hopper patterns in your box will work just as well. As long as they are large, bushy and have some rubber legs to impart some action they should be productive. Spring also sees the start of the caddis fly season that will last right through until late fall. The fish in the Bow are very familiar with these flies and feed on them heavily through out the year. No Bow River angler should be without some Elk Hair Caddis or similar patterns in various sizes and colours. The one thing that can mess up spring fishing is the runoff that hits the Bow in varying degrees every year. Some years it floods and fishing is impossible while others it just comes up and goes down without very many days of what I would call unfishable conditions. When you are faced with high water conditions concentrate your efforts where the fish can be sheltered from the high current. This is usually along the bank where the high water pushes many of the fish. As long as I have at least 18 inches of visibility I am confident that I can catch trout and once the water starts to turn from brown to green the fishing can be spectacular. "Pounding" the banks with streamers at this time is fun and exciting and one of my favourite times to fish. 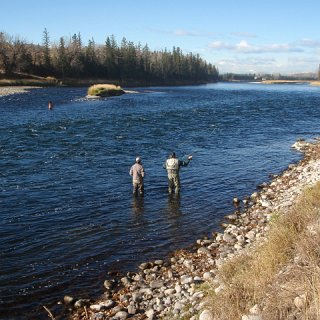 Summer fishing on the Bow River

Once summer arrives the problems with cold weather and high water are no longer a challenge but warmer water and increased angling pressure can slow things down a bit. Pale Morning Dun mayflies will be hatching from mid June through the end of July. They can be imitated in their nymphal form with many mayfly nymph imitations with the Gold Ribbed Hare's Ear being one of the most popular. A light coloured dry fly such as the Light Cahill tied in either a parachute, thorax or traditional style should fool most fish. Start with sizes 14, 16 or 18 and if you get refusals try going one size smaller. Fishing the banks is the normal strategy from a float boat but the angling pressure will often move the fish away from the banks and into the middle of the river. While this area is not as easy to "read" as the bank it can be very rewarding. Look for depressions, drop offs and seams. Fish these areas on days when the banks aren't producing and pay attention to where the guides are floating. These guys are on the river every day and know where to position their boats so that their customers will catch fish.

Summertime and the fish are getting fat!

Fall fishing on the Bow River 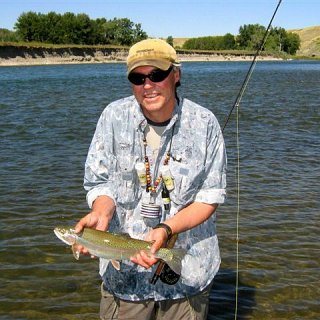 Fall on The Bow

Fall is my favourite time to be on any trout stream. There is an abundance of food available to the trout, the crowds thin out and the browns are getting aggressive as they prepare to spawn. Terrestrial fishing is probably at its best during this time of year. Patterns that imitate ants and beetles will bring fish to the surface, but in some years the grasshopper is king. Trout of all sizes love to eat grasshoppers as they are large, juicy and are not suppose to be on the water. When hoppers hit the water they are trapped making for easy pickings for the fish. The dry/dropper rig mentioned earlier was invented at this time of the year and was called the hopper/dropper technique. Hanging a small nymph underneath a large hopper pattern is a very effective way to fish. Some days will produce more fish on the nymph than the hopper while others will find the fish keying in on the dry or occasionally they will attack both. I like to hang my nymph about three feet under the hopper. I think the hopper draws their attention and on their way to investigate they spot the nymph and go for it. Fall is also the time for two species of mayflies on the Bow, Tricos and a second round of Blue Winged Olives. Both of these are small, size 18 or 20 for the BWO's and size 20 or 22 for the Tricos. Fishing these can be challenging but can also reward the angler with entry into the 20/20 club. A 20 inch or better fish on a size 20 or smaller fly. The main reason, however, that I love the fall so much is the streamer fishing. Both the rainbows and browns will start to chase and smash streamers with abandon at this time perhaps knowing that big meals will soon be gone once winter arrives. 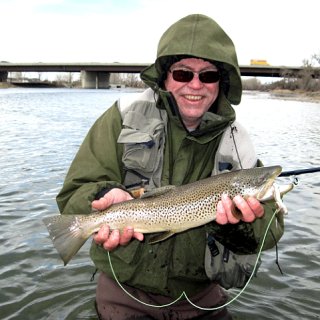 Fall is the time for large fish on large flies such as hoppers and streamers.

Bow River anglers are indeed lucky to have 12 months of fly fishing available to them. While some years cooperate more with warmer winters, more Chinooks, gentler run-off and a longer fall season, the dedicated, or obsessed, angler should be able to catch trout every month of the year. One of my most memorable days of this last fishing season was fishing the Bow with son-in-law Adam on December 27th . We both hooked several fish and managed to land a couple of nice brown trout while other family members enjoyed the nice winter day jogging, biking and walking their dogs.