Bright Fish from the Land of Silver

The hot prairie wind howled through the valley and seemed intent on pushing the pitching rubber raft against a towering cliff of mellow sandstone. Dario strained on the oars trying to keep the boat on target while the competing forces of the mini-hurricane and a swirling eddy gave notice they had other ideas. I hung onto the raft’s safety bar with one hand and readied my fly rod with the other, waiting for the guide-versus-nature battle to run its course. When the craft found a little relief in the lea of Paredon Blanco, Dario regained a modicum of control and propelled his boat against a riffle. He then indicated I should cast. I whipped the dry/dropper rig out with a rapid fire roll cast as high up into the frothy water as the blow permitted, picked up the slack, then watched the progress of the searching dry fly down the chop. When it hit the drop-off, it twitched and disappeared into the foam. “Set,” hissed Dario. I already had. Fly-line began peeling off my reel and a stressful bend appeared in the 5-weight rod. A scenario that had been repeated previously numerous times that day. When the tussle was over an 18-inch rainbow lay gasping in the guide’s net, the #16 Copper John nymph still embedded in the big trout’s jaw. Not bad, really, for early February. This summer-fishing scene could have been played out on any of a number of Western Canadian rivers like the Bow below Calgary, the East Kootenay’s Elk or the Red Deer River tailwater. While all three offer winter angling for the hard core fanatics, it still takes a lot of fortitude to venture out with rod in hand during the white months. But there is a part of the world where winter is summer and rainbow and brown trout thrive in cold, fast-flowing rivers that come charging out of the western mountains and spill out onto a parched plain. This land of bright fish is the “Land of Silver”. Or as they say in Spanish – Argentina. And even though it’s at the bottom of the planet and we’re near the top, it’s not as far or far out as you may think. 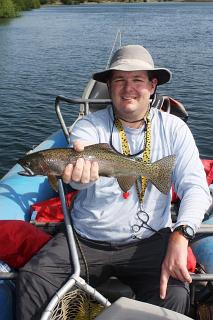 While most international air routes lead to Buenos Aires, Argentina’s premier trout fishing is generally associated with two areas. The first is that great spine of mountains on the country’s western frontier known generally as Patagonia. Rivers great and small owe their origin to the snows of the Andes whose cold-water influences reach many kilometres into the plains at their feet, which are called the Pampas. The Europeans who settled Argentina – largely Spanish and Italians but other nationalities too – brought many familiar things with them. Including red deer, wild boar and Lombardy poplars. But two species they introduced to Argentina’s fertile but nearly barren waters of interest to anglers are rainbow and brown trout. The trout adapted readily – as did the stags and pigs – and now provide a premier fishery at a time of year when most western anglers have hung up their waders. The second area of focus is in Argentina’s deep south. Tierra del Fuego – the Land of Fire as it was erroneously named by Sir Francis Drake – is world renowned for its brown trout. Not just regular, river-borne brownies but a unique species that spends a good part of life in the nutrient-rich ocean and returns to its home river to spawn. In the interim it has put on several kilograms of weight. It was these two regions of Argentina where I focused my angling attention during a recent trip.

Visiting Andes anglers are confronted with three choices: guided angling with accommodations in town, a lodge on a ranch (called as an “estancia”), or good old DIY. Each has its advantages and distractions. For my mountain adventure I chose a guide service called Damonte Outfitters who arranged accommodations in a picturesque mountain town at the edge of Lanin National Park called San Martin de los Andes. Which is essentially the Argentinian twin of Banff. It allowed my non-fishing partner to enjoy the resort by day while I fished the iconic Patagonia rivers and return to the boutique motel in the evening for a quality meal in one of St. Martin’s numerous restaurants. The down-side, and it was a minor one, was the commute to the fishing which was out east beyond the mountains on the Pampas. Over a period of six days, with one R and R break in the middle, I fished the Malleo, Alumine, Collon Cura and did several runs down the classic Chimehuin. Other than the Malleo – a compact little river that flows through a broad basalt canyon on Mapuche Indian land – all the other trips were in Dario’s boat. It became pretty evident early on that a do-it-yourself, walk-and-wade trip has its limitations. As well as worthy imports like trout and deer, Argentina’s settlers also introduced some species that they may now regret. One is a large willow tree that has colonized the banks of most of Patagonia’s rivers so successfully that it’s very difficult for bank anglers to access holding water and make a cast. The raft solves this problem and also gets the angler into some interesting lies. The trailing willow branches create a myriad of seams, eddies and foam lines that hold an impressive number of trout. Getting a fly tight to the willows without a hang-up from a moving boat in Patagonia’s constant, swirling winds, of course, makes Argentinian fly fishing a high anxiety excursive of risk and reward. But whenever you set the hook one of those big, willow-loving rainbows the fun begins. 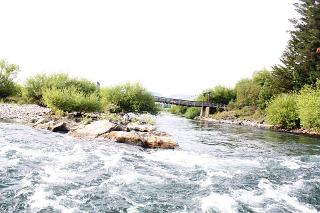 It’s called “Catorce” - not because it’s the fourteenth of 21 named pools on the property, but this tranquil Rio Grande-run nudging against an undercut bank rewarded a lucky angler somewhere in the pool’s illustrious past a 14 kilo brown trout. I’m wielding a 12.5 foot spey rod with a fast-sink shooting head, aiming a fly my Tierra del Fuego guide Melvin calls a “Maquina Verde” (but Miramichi Atlantic salmon anglers will immediately recognize as the cosmic Green Machine) tight to the turf on the opposite bank. The fly lands and Melvin hisses “twitch.” I give the running line a short, sharp tug and almost immediately something at the far end of 60 feet of fly line and tippet tugs back. It’s an impressive tug. And only grows in stature when it feels the point of the hook going home. The fight is long and contentious. When the bend of the big two-handed rod finally breaks the big brown trout’s spirit it slides reluctantly into the guide’s substantial net. The net scale reads a tick over nine pounds. More similar sea-run browns – but none bigger – will follow over the next three days of my stay at Estancia Aurelia, a sprawling sheep ranch on the parched plains of Tierra de Fuego whose main feature, as well as prolific herds of Argentina’s native, hump-less camel called guanaco, is the Rio Grande and the big browns that swim in it. As well as the fishing and the solitude (there are numbers painted on the ranch-house roofs so emergency helicopter pilots can identify them in winter when the country is snowed in) estancia living is interwoven with the “asado” – Argentina’s unique interpretation of barbecue which is inevitably accompanied with quantities of delicious malbec wine. 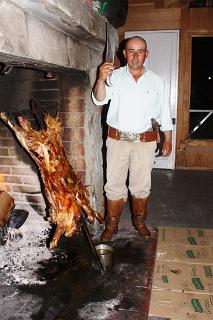 Air travel has turned the world into a global village. So it doesn’t take much more time to drive from Fort McMurray to Lethbridge than it does to fly to Argentina. But most flights tend to terminate in Bueno Aires, the thriving capital – which feels more European than many old country cities these days and is well worth a visit. But the next challenge is getting to the fishing. While there are fleets of luxury busses that head for the hinterland, the quickest and most efficient travel mode is by Argentina’s domestic airlines. Argentina, like Canada, is a vast country. The best way to get anywhere fast is to fly. Food, drink and accommodation is relatively cheap and gets cheaper if you use money changers who offer better exchange rates than the official banks. But only if you feel comfortable. Guide fees, it seems, are pretty standard around the world and Argentina is no exception. 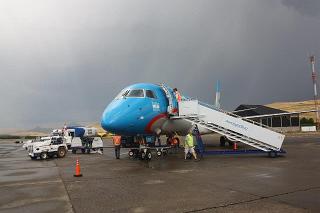 A standard 8.5 or 9 foot flyrod for a 5 or 6-weight line is perfectly adequate for Patagonia trout fishing. But the Tierra del Fuego rivers require a rod that can punch out a long line to a precise target. The 8-weight nine-footer I brought with me proved inadequate but the spey loaner was perfect. Waders, rain gear and a good hat, preferably with a chin tether, it goes without saying should form part of an Argentina tourist angler’s outfit. Although I did tie up a selection of flies, as is the usual case with guided angling, I ended up using the local selections including Dario’s “Rosita” dry fly and a range of exotic sea trout flies from Melvin’s box. Also be prepared for “siesta” – a mid-afternoon break of an hour or so – usually involving a snooze. This tends to push dinner back to after 9 pm. A time, apparently, that most Argentines consider a decent hour to have supper because the restaurants – which were empty at 8 pm. - are packed, sometimes with line-ups. Another upside of going south rather than east or west for a winter trout break is that you largely avoid the curse of air travel – jet lag. But the real deal in this topsy-turvy Land of Silver are the big browns and rainbows that swim and eat flies freely in rushing summer rivers when our trout streams are locked up tight in an icy prison. 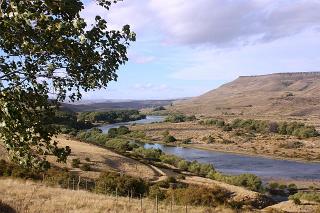