It’s Friday, 5:00 p.m. You’ve arrived home after another gruelling work week and aren’t in a great mood. You’ve still got to load up the kids, the camping gear and the food. Then you’ll fight the weekend traffic. It’s going to take you the best part of an hour just to get out of the city, then another couple to reach your destination. You ask yourself if it’s all worth it. Meanwhile, the fellow who sits at the desk next to yours is already knee-deep in water, fighting a six-pound walleye. What does he know that you don’t? Quite simply that some of the best fishing waters across the prairies offer little angler competition, are home to a great diversity of fish and, best of all, can be found right outside your door. Of the major prairie cities, Edmonton, Calgary, Saskatoon, Regina and Winnipeg, only Regina is not situated on a major river. 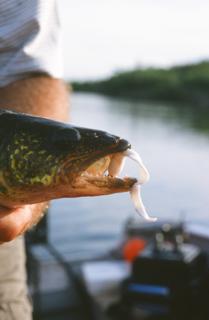 The guy who sits next to me at work already has his fish.

- The North Saskatchewan River runs through the heart of downtown Edmonton and harbours catchable populations of walleye, sauger, northern pike, burbot, goldeye, rocky mountain whitefish and the prairies largest fish, the lake sturgeon. The three most popular target species in this underutilized fishery are walleye, sturgeon and goldeye. Walleye fishermen have their best luck in spring and fall, when fish are concentrated in deep holes. Back eddies, creek mouths, bridge abutments, beaver houses and drainage discharge areas are your best bet. Spring sees successful fisherman throwing rubber-tailed jigs, working them back slowly along the bottom. In summer,Lindy rigs are productive, baited with either worms or minnows. These should be stationery for best success, so depending on the current strength, you may have to go to a little heavier weight than usual. As the summer moves into fall, crankbaits become popular, particularly for those who troll.

Access to boat launches within the city is limited, with Goldbar Park being the most popular, but foot access points are numerous. Terrific walleye fishing can be found at Cloverbar Park, Whitemud Creek, Dawson Park and the Cloverbar Power Plant, though any place an angler can access the river is liable to produce fish. Walleye in the six- to eight-pound class are not uncommon within city limits. Sturgeon have garnered a lot of attention as anglers discover the abundance of these huge fish within city limits. Fishing is best in August and September, with the preferred method to run a 2 - 7 oz. weight (depending upon current flow ) on a one-foot leader from a 3-way swivel, with a three- foot snell to a single 3/0 hook. Three or four dew worms bunched on the hook has proven to be effective bait. Hot weather is key to successful sturgeon angling. Look for them in large, deep pools, especially on outside turns. Most of the popular sturgeon holes are easily accessible on foot. Recommended tackle includes eight- or nine-foot rods with 150 yards or more of 14-20 lb. test line. Though most sturgeon caught in Edmonton run in the 10 - 30 lb. class, fish nearing 100 lbs. have been landed. Goldeye are common throughout the city and are the river’s most frequently caught fish. They are a great treat for young anglers and can be caught using a jig and worm, small spoons, a bobber and worm, or on flies. They relate primarily to current areas and are most common from late May through to September. 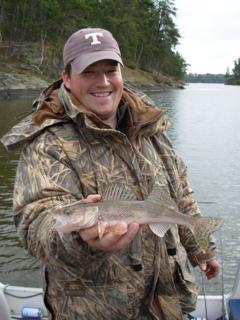 - The City of Calgary has gained world-wide recognition for its brown and rainbow trout fishery in the Bow River and rightfully so. Rainbows can be caught throughout the season and offer unbeatable excitement with their leaps and cartwheels when hooked on light tackle. For the fly fisherman, spring is the time of year for nymphing. Beadhead Prince’s, Gold-Ribbed Hare’s Ear and Pheasant-Tail nymphs, along with San Juan Worms, are the flies of choice. Fish them on a floating line with a strike indicator through riffle areas, adding enough split-shot to ensure your fly bounces along the bottom. 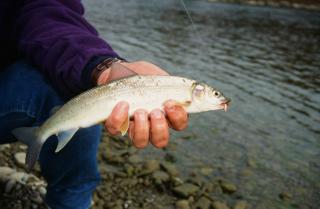 Trout are elusive today, this is the next best thing

The summer months on the Bow are famous for their hatches, and there is probably no more rewarding way to catch a rainbow than on the dry fly. Pale Morning Duns, Blue-winged Olives and the Elk Hair Caddis are productive flies, imitating the most common hatches. Streamer patterns fished on sink-tip lines will also produce, with favourites Woolly Buggers, Bow River Buggers and Zonkers. For the spin fisherman, a variety of jigs, spinners, spoons and crankbaits will entice fish, particularly when cast into deeper pools. Brown trout are caught in basically the same manner as are rainbows, with one notable exception. Those who know the river well say that the absolute best time to fish browns is after nightfall. These shy fish lose some of their inhibition under darkness, and large streamer patterns or wobbling crankbaits are too much for them to resist. While most trout caught in the city average 10 -16 inches, fish in the 24 - 30 inch class are landed annually. Access to the river can be found at numerous spots throughout the city and most anglers fish upstream in their search for productive runs and pools.

There is nothing more exciting than fishing on the fly

- Saskatoon hosts the South Saskatchewan River on her northern journey and offers walleye, pike, sturgeon and goldeye. Walleye are the most sought species, with fish in the 10-pound class caught regularly; fall is the best time for trophy-sized fish. Pickerel rigs are favoured by local anglers, though jigs or Lindy rigs also produce. Minnows, crawlers and leeches are effective baits; experiment to find out which is producing. River levels fluctuate significantly through the year and you’ll need lots of weight to steady your presentation in high water. The favoured location for walleye is below the weir, with good access available from either side. This is also a choice spot for those who prefer to fish crankbaits. Water levels here are relatively shallow and many anglers wade, casting as they move. Upstream, near the water treatment plant, is not nearly as productive, partly because of the turbid waters. Goldeye are plentiful throughout the city. Quiet summer evenings feature tremendous mayfly hatches, and these can be a boon to the fly fisherman. Casting from shore can be difficult because of the steep banks, but if you can get your fly out in the current, a couple of twitches should trigger a strike. 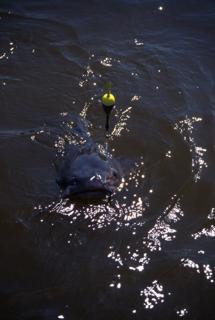 Fall is the best time for trophy-sized fish

- Manitoba’s capital is situated at the junction of the Assiniboine and Red Rivers. They host the widest variety of species in the province, including catfish, freshwater drum, goldeye, sauger, walleye, white bass, perch and bullhead. Manitoba is known for its trophy channel cats, and the city produces its share. Run a single 2/0 hook from a 3-way swivel with fresh or frozen fish, frogs, chicken liver or dew worms as bait. Use as much weight as it takes to hold your bait in the current. Popular locations include the north perimeter bridge (the city’s most frequented boat launching site) and at the Forks, where the rivers meet. Hundreds of 20-pound plus cats are taken every year. North Kildonan Park is a popular destination throughout the year, particularly for goldeye. This is a great place to introduce kids to angling. Other spots worth trying include Fraser’s Grove Park and the mouth of Sturgeon Creek on the Assiniboine. A hot summer’s day finds fishermen at the base of virtually all of the bridges that cross the river. 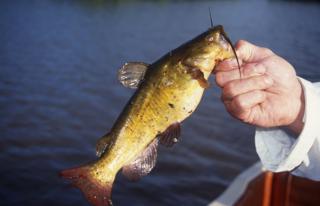 There’s a world of underutilized fishing opportunity in our most populated western cities, offering a diversity of species and excellent trophy potential. Just think how rewarding it is to be fighting a fish in the shadow of your home town while the rest of those suckers are still fighting traffic!