Sealing the Deal – How to Ensure You Land More Fish

It was on her second cast to the big corner pool that the rainbow engulfed the Stimulator, felt the sting, and, as rainbows do, immediately leapt skyward. My wife, with equal parts awe and surprise, immediately jerked back her rod, snapping the leader in an instant. The trout crashed back beneath the surface and in mere seconds the entire experience was over.

But in that briefest of moments I saw a fish like few others. The tiny creek had revealed to us the crown jewel of its inhabitants, a sleek rainbow that would have surely passed 22” in waters where an honest 16” trout is typically the best of the day. Still in the early development stages as an angler, Jane didn’t quite know what she’d lost, but I definitely did. And, more to the point, I knew why. Like far too many anglers, she’d just lost what would have been a fish of memories because she didn’t have the skills to fight and land a fish of that size. 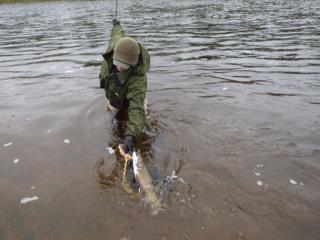 Of course, that deficit wasn’t her fault as while it’s easy to practice casting skills in the park and knot tying in the garage, there’s no easy and effective way to practice, or teach, how to handle a fish on your line. You pretty much need the real McCoy to develop those skills, and experience, as Jane and most of us have learned, can be a cruel teacher. That’s the problem with experience – you generally need it about 10 minutes before you get it.

Having said that, there are some fundamental truths about hooking and playing fish that most developing anglers can benefit from by understanding and putting to practice. It matters little whether you’re using fly or spinning tackle – the basics are the same.

Inadequate hook sets result in more lost fish than most of us care to remember. It’s all about understanding the fish species you’re targeting, the tackle and technique you’re using, and the amount of line you have out.

Hard-mouthed fish such as pike, bass and walleye require, and can sustain, a much stronger hook set than do softer-mouthed species like stream trout and grayling, which most often require only that the angler “tighten up” on the line. 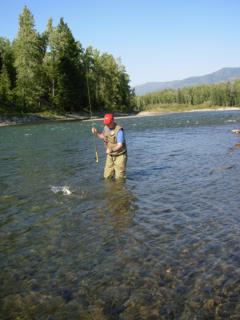 Tackle consideration includes the gauge of your hook, remembering that narrow diameter hooks will penetrate more easily than will thicker hooks. Know the breaking strength of your line or tippet as well – can it sustain a heavy shock without breaking? Is your rod relatively soft or is it stiff – be conscious of the amount of “give” you’ll have when setting the hook.

Give thought, as well, to your technique or presentation. As often as not fish caught while trolling will impale themselves, but you’ll have to set the hook on fish that sip a more passive bait.

The distance between the angler and fish also impacts the effectiveness of your hook set – monofilament line, in particular, stretches considerably, and the further you are from a fish, the more “oomph” you’ll need to properly bury your hook. 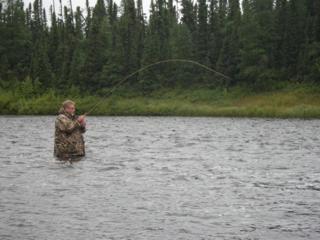 Everything else being equal, if you’re losing a lot of fish at the point of impact, most often it’s because you’re not setting the hook firmly enough on hard-mouthed species and you’re setting it too hard on softer-mouthed fish. Think about the variables before a fish takes your bait and visualize how you’ll set the hook when it does.

Playing a fish is another of those lessons that’s usually learned the hard way, through trial and error, with errors definitely prevailing in the early sessions. As neophytes we often attempt to haul in our fish by simply cranking on the reel handle, which proves to be a terrific way to lose a fish quickly. A “professional release” some might call it! In reality, it’s your rod that does most of the work in landing fish; the reel is generally along for the ride, with the exception of the drag, which we’ll get to later.

Our objective should be to land a fish as quickly as possible. A relatively brief fight means that fish are less tired, so they’re more likely to survive a subsequent release. A shorter fight also translates into reduced likelihood that a fish spits the hook, breaks you off, or wraps your line around a snag. The anglers I’ve seen who land the highest percentage of their fish are the ones who play them the quickest and hardest. 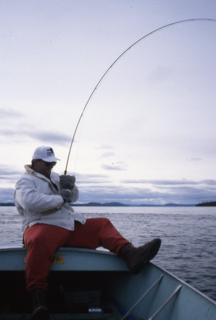 Back to the drag. Beyond its value in holding line, the drag is the most important function of a reel and, when properly set, protects your line from breaking while concurrently helping to tire a fish. It’s critical, therefore, to set your drag before you have a fish on. The time-tested rule of thumb is to set your drag to 25% of the rated breaking strength of your line, meaning that if you’re fishing with 8lb. test, your line should release with 2 lbs. of pressure. You can use a spring-type scale to accurately measure this, or simply best-guess it by hand. Either way, you want to be able to set the hook without enacting the drag, but at the same time you want your drag light enough that a big fish doesn't break your line.

When fighting your fish, keep your rod tip up – this allows your rod to act as a shock absorber, taking pressure off the line when a big fish makes a run. Keep constant pressure on the fish and avoid stalemates. Either the fish should be taking line, in which case let him do just that, or you should be taking line in. The key is to avoid slack in the line – if the fish in running towards you, reel in the slack. If he’s running away from you, don’t turn the reel handle but keep your rod up and let the drag do its job. If you continue to turn the handle against the drag while the fish is running with a spinning reel you will introduce twists in the line that will eventually cause problems.

If your fish isn’t taking line, “pump” the fish in by lifting the rod tip, effectively pulling the fish towards you, and then lower the tip while simultaneously reeling in the slack you’ve created. Then repeat, and continue repeating unless the fish turns and runs, in which case you stop reeling and again let the reel’s drag do the work. Each time the fish stops running, repeat the process until the fish is at bay and ready to be landed.

The exception to the adage to always keep your rod tip high is when a fish jumps. In those situations, lower your rod tip, or “bow to the fish”, when it leaps. This will help eliminate the common problem of breaking off when a fish jumps, which is particularly common when fighting trout, steelhead, Atlantic salmon and bass.

In the end, experience will be your best teacher, and you’ll likely lose a few big fish along the way. After a while, however, you develop a natural feel for playing fish and won’t be subject to those feelings of panic when you’re into a big one. Just remember, in simplest terms you let him run when he demands it and rein him in when you can. How hard is too hard to pull? Well, you’ll figure it out. 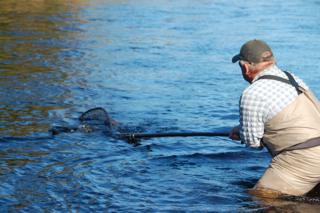