The recent hot and dry weather in Alberta that closed many of southern Alberta streams due to high water temperatures got me thinking of alternate locations for trout stream addicts such as myself. There were a few Alberta alternatives. The Crowsnest remained open probably because it stays a little cooler with its source being the very deep and cool Crowsnest Lake. Also the North Raven River (Stauffer Creek) while very low remained cool due to it source being springs that come out of the ground at around 54 degrees. Over the border in B.C. they were dealing with the same problems with high water temperatures. This got me thinking of one of my favourite trout streams, namely the Missouri River in Montana. The Mo as the local’s call it has always been one of my favourite streams to visit and is always a good alternative when water temperatures are unfavourable elsewhere. While it is a whole travel day away, Craig, where most anglers make their headquarters, is 262 km south of the Coutts/Sweetgrass border crossing. Because the dam regulates the flow on August 22 the water temperature on the Missouri was in the low sixties, well below the water temps we were experiencing in Alberta and B.C. 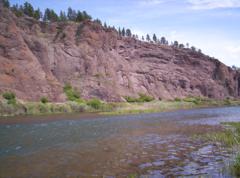 I was first introduced many years ago by a trip I bought at a Trout Unlimited auction. After spending one day on the river I was hooked. A few years later I arranged for the Trout Unlimited chapter to bring up Arnie Gidlow to give a seminar. Arnie was just getting his Missouri Riverside Lodge and Guiding business off the ground. I have remained friends with Arnie to this day and stay at his place on my annual visits. Craig Montana is the ultimate "trout town" that has to be seen to be believed; with a population of eighty people it has THREE full service fly shops. These shops make their living in the short summer due strictly to the large number of visiting anglers that come to fish the Missouri. These shops are open from around 6-6:30 am to 9:00 pm or later seven days a week. You can buy everything you'll need on the river from flies and floatant to waders, rods and reels and even lunch and ice for the cooler. You had better get what you need at the fly shop because there's no gas station or corner store. If you don't have a drift boat, or don't want to drag yours down, and want to float the river you can rent one from the shops. Rental rates run around $130.00 to $150.00 which includes drop off and pick up of the boat, as well as, the shuttling of your vehicle. Split three ways it's a real bargain. Guide services are also available through the shops and shuttle services are available if you bring your own boat. 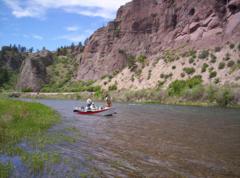 Drift rentals are available in Craig

Due to its consistent flows and reliable fishing the Missouri does get extremely busy in the summer. When other Montana streams get closed due to low flows and high water temperatures it seems like every fisherman and guide in Montana is on the Missouri. Anglers form all over the world travel to fish the river and I often run into other Albertans, including Bow River guides and shop owners on the water. On my last trip in June of this year as I was getting out of the vehicle to go into Isaacs restaurant for dinner I ran into Alberta trout guru Jim McLennan and his wife Lynda. They had just been commenting to themselves about the amount of Alberta plates they had seen in town, and when we pulled in they commented, "and look there's another one"! Fishing on weekdays is usually a little quieter with the locals at work and the recreational floaters in their inner tubes and pool toys at a minimum. We usually drive down on Sunday, fish Monday, Tuesday and Wednesday and return home on Thursday. 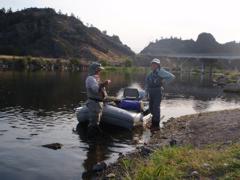 Getting ready for another day on the Missouri

The Missouri River is basically a large "spring creek", formed by the joining of three equally famous trout streams, the Jefferson, the Madison and the Gallatin. After converging to form the Missouri, the river passes four dams, Totson, Canyon Ferry, Hauser and Holter. Below Holter Dam the Missouri becomes a "Blue Ribbon" trout stream for next 30 or so miles to the town of Cascade. The dams help control the flow. Spring runoff is used to fill the reservoirs and the dams help keep the water cool. The dams are managed in such a way that the trout have a good flow of water, winter and summer. Fish populations are estimated to be in the 7,000 to 8,000 trout per mile! The river is dotted by well marked access points along this section. Some have boat launches while others are walk and wade accesses. Much of this section of river is paralleled by what is now known as the "Recreation Road". This was the old highway before Interstate 15, which also parallels this stretch. Sometimes the two are on opposite sides, sometimes the same side but the fishing accesses are all off of the recreation road. The Montana government realized the value of recreational fishing a long time ago and stream access is both plentiful and well marked. 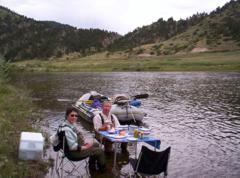 The Missouri has fishing year round and all methods work well, however, many anglers come for the fabled dry fly fishing available from March through November and hatches can be incredible. The combination of steady water flows and temperatures promote vigorous weed growth making excellent conditions for a wide variety of insects. Pods of rainbows and browns will line up in the feeding lanes to chow down on these hatching insects and can be notoriously picky and spooky, providing a challenging dry situation. That being said you never know what to expect. Last June I was fishing a small back channel that was no more than knee deep in most places, it was the middle of the day, bright and sunny with no overcast. Trout were rising everywhere, not small fish, not rainbows, but browns defying everything ever written about them. The Pale Morning duns hatch was on and a well placed cast over them was very successful. I managed to hook and land numerous browns in the 16 to 19 inch range. The next day under similar conditions and PMD's dotting the surface not a brown was in sight and the best I could muster was a couple of small rainbows.

The Missouri holds large numbers of both rainbows and browns

Nymphing is the most successful method early in the year and successful patterns include mayfly nymphs like the Evil Weevil, Lightning Bug and Copper Johns. In July the caddis hatches get going and swinging a Sparkle Pupa pattern can bring great results. Once the weeds start to get really bad it can be tough to get a good drift without picking them up. This is when dry fly fishing or "hopper-dropper" fishing works great. Trico hatches start in August and run through September providing some challenging fishing on small dries and spinner patterns. The Zebra midge in sizes 18-22 works all season long due to large number of midges found in the river. 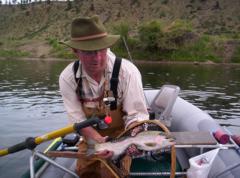 The fish on the Missouri are as hard fighting as you'll find on any trout stream, second only in my books to Alberta's Bow River rainbows. They know how to use the weed beds to their benefit and both the rainbows and browns will jump in an effort to shake your fly. The Missouri has all the things that make a great trout stream but that doesn't make it a sure thing. Even after all these years I have been skunked. In fact on my last trip I got zippo on day one but then had 7 fish in the first hour on the second day. That's trout fishing on the Big Mo! If you haven't ever fished the Missouri you owe it to yourself to experience not only the great trout fishing but also the unique "trout town" Craig Montana. Give it a try, you’ll be glad you did. 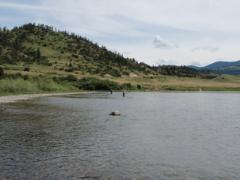 It can get crowded on the Missouri but there's plenty of river and fish to go around!