Do It Yourself Pink Salmon

As I approached the bridge that spans the Vedder River, a smile immediately lit up my face. This was the river of my youth. A place where I have caught more salmon than I care to count. Most of those were pinks and chums, both being remarkably easy to catch, but there were sprinklings of coho and chinook too. Rather than build up the hype and try to verbally sell the river to my friends, Wayne and Leonie, I brought them along so they could gather their own impressions.

We were on vacation together and as the Vedder came into view, I was happy. The water was swift and as clear as I remembered it. Below me, an angler was working a float and yarn fly tumbling it along bottom and right into the sight lines of holding pink salmon. It wasn't 5 drifts before he swept his rod up and was in tight to a salmon. It raced into the swift water and a second later the rod snapped skyward and the hook popped free. Unphased, the angler checked his gear, looked to the water and lobbed his float in for the next drift. Such is the nature of salmon fishing. 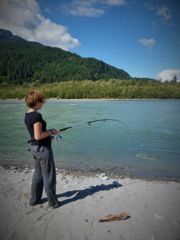 Wayne, Leonie, Melanie, and I walked a neatly groomed path along the river’s edge to where we came upon a small trail leading to some large boulders marking the upstream position of a deeper pool. We walked over to the river’s edge and a quick scan with our polarized glasses told us everything we needed to know. There, a mere rod’s length in front of us in this crystal clear water, were schools of pink salmon, finning about the bottom, doing what salmon do. Wayne and I looked at each other and smiled. In that moment, we knew that a salmon fishing experience would become a part of this vacation. We had some miles to make before calling it a night as our final destination was Squamish so we carried on. We figured at the very least we could pick up licenses there and if need be, make the run back to Chilliwack and the Vedder. Turns out, we wouldn't need to. 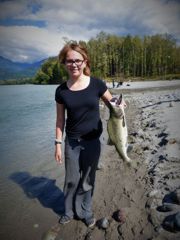 Humpies, as they are often called, provide countless hours and days of good fishing

The next morning while most of our crew were off conquering the summit of the Chief, a popular climbing and hiking mountain near Squamish, Wayne and I took the day to check out local fishing opportunities. We quickly found that the Squamish River was the place to be. Rather than take anyone’s word for it, we drove there, and saw what was going on for ourselves. At the confluence of the Mamquin and Squamish rivers, and downstream of that point, was a long string of anglers. Most were tossing the traditional float, weight, and yarn fly, a rig that is very prevalently used on coastal streams. A quick scan of the anglers showed that at any point in time, there were at least one or two people fighting fish. The salmon were in, and the fishing was good. 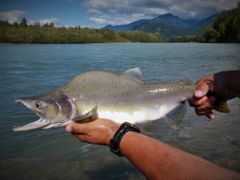 We talked with one of the anglers closest to us, who seemed to be catching more fish than most. He gave us the beta: use a size 2 Gamakatsu hook, pink yarn for the fly, a small bell weight and a float that could hold up the works. The idea is to have the pink yarn fly drift downstream of the weight, right along bottom in front of migrating salmon, while the float controls the drift up top. To his credit, he caught a salmon in front of us while describing the rig. That was all the convincing we needed and we were off to the store for supplies.

About $50 later, we had our tackle and were making tracks for the Squamish. Once there we saw an opening between anglers big enough for both of us to set up and cast our lines. Using polarized glasses we could see salmon moving perhaps 20 feet off shore. This is not unusual, as salmon often move close to shore. It seemed that the salmon closest to shore were more actively engaged in spawning and had physically transformed, becoming more colored, with the males developing that characteristic hump on their back, earning them the common name, humpies. Slightly deeper though, were migrating salmon, and these fish were mint silver fresh-from-the-ocean. These were the fish we were trying to catch, and if we did, some would be coming to camp for dinner. 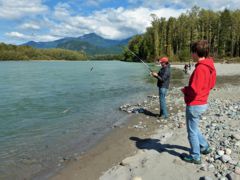 Back in his preferred casting spot, Wayne caught a lot of salmon from this stretch of river

We set up our rigs so the distance between our float and weight was around 5 to 7 feet, ensuring the weight and yarn fly would make it to the bottom on its drift. Then we'd cast across stream or slightly upstream and follow the floats progress down the river, keeping tension between float and rod. This allowed us to feel what was going on with the weight and hook. It wasn't long before I felt something odd, so I lifted my rod up and was into a salmon. Wayne hooked up too. These fish were scrappy, using the swift current to their advantage, repeatedly pulling our 15 pound line, before giving in to the pressure. After the first couple fish, the flood gates broke open and we were off to the races. For the next few hours, it was never more than 5 or so minutes before one of us would hook up. Towards the end of our day we kept 4 of the freshest, most silver of salmon and brought them home for a BBQ, and oh yes, they were delicious.

The rewards are quick and often when the pinks are running

After excitedly telling our climbing crew about the great fishing that evening, we went back the following morning for a repeat performance. The pinks were there to greet us, as was the good fishing. We stayed only for the morning and again, returned with 4 fresh from the ocean salmon. To add to our culinary treat Lloyd would add live crab he caught that day from his kayak. It was a feast. 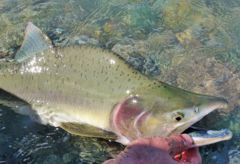 Pink salmon run the rivers and streams throughout southern BC every second year (odd numbered years 2013, 2015, 2017 ...). The fishing gets good in August and keeps up right through to the end of September. This fishery could be described as an ideal recreational fishery, with lots of fish, lots of catching, and everyone having fun. The next time you're planning a fall trip to the coast, take a peak at the salmon streams and see if the pinks are running. If they are, all it takes is a licence and the most basic of gear to get in on some fantastic fishing.