Fly fishing beyond Trout: getting started

Fly-fishing has long been thought by many as a technique predominantly appropriate for trout anglers. It’s certainly an effective way to present a lure to trout, particularly on streams, rivers and pothole lakes. Further, many trout species, including rainbows, browns, cutthroats and brookies, rely heavily on insects as a food source, and artificial flies replicate better than any other lure the various life stages of the most common food insects naturally available to trout. But if you believe that fly-fishing isn’t an effective way to catch a wide variety of species’, you’re missing out on adding a new level of challenge and excitement to your fishing. 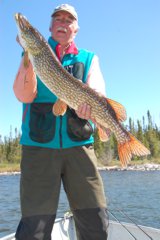 It’s actually a misnomer these days, I’d suggest. Fly-angling can no longer be defined as the art of casting flies and other insects, it more appropriately describes a means for presenting any lure to a fish. It’s all about the line you use, not what’s tied on to the end of it. With conventional tackle you cast the lure, and the weight of that lure in motion pulls line off the reel. With fly-angling, it's just the opposite. Every fly line is weighted, and it’s the weight of the line that "loads" the rod during the casting process, and it’s the line that you cast; whatever is tied to the end of the line just goes along for the ride. Another often misunderstood aspect of fly-angling is that your lure, or "fly", is supposed to float on the water’s surface. While sometimes that’s the case, there are an equal number of fly lines on the market designed specifically to take your fly subsurface, anywhere from just below the surface film to dozens of feet down in the water column.

As long as we’re dispelling myth, let’s talk specifically about flies for a moment. It’s true that, traditionally, fly-casting focussed on presenting insect imitations to fish, hence the term "fly-fishing". That’s simply no longer the case and, while anglers continue to use insect imitations, today they’re just as likely to use fly gear to present imitations of minnows, leeches, mice and more, just as you would with conventional tackle. 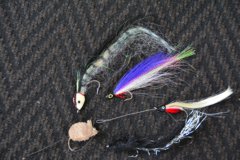 Over the years I’ve caught many different species on fly tackle, from coho salmon and blue sharks, to pike, bass, walleye, lake trout and even catfish. With few exceptions there are no fish or fishing situations in western Canada where you can’t be successful with fly tackle. In fact, there are times when fly tackle is more effective than conventional tackle. I know, enough already, I’ve convinced you. What you really want to know is how to get started. Fly-fishing rods, reels, lines and all the accoutrements make for a bedazzling and confusing display in the tackle shop. So let’s break it down to the simple component parts you need to get started. 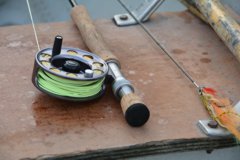 A basic fly-fishing rig consists of rod, reel and line. All three are designated by weight, and it’s important to ensure they’re matched with one another. It’s the the line, specifically its first 30 feet, that determines the weight, with the higher the number the heavier the line. Typical for use in western Canada are 4-weight to 8-weight rigs, though they’re available from 1-weight up to 14-weight and beyond. Heavier lines and rods are better suited to larger flies. They also cast further, cast better in the wind, and are typically used for larger fish. Generally speaking, 4- to 6-weight rods are ideal for trout and other small fish on streams and ponds; 6- to 8-weight gear is appropriate for larger fish and larger waterbodies. If you’re considering pike, walleye, bass or similar, I’d suggest starting with a 7-weight rig.

Fly rods come in various lengths, though 7 ½ - to 10-foot rods are most common. In 7-weight, a 9-foot rod is ideal for all-round use. If you plan to fish regularly from a float tube, you might consider a longer rod. Fly rods are also described by the amount they flex, defined as the rod’s "action". Slow-action rods flex a lot, while fast-action rods are quite stiff. A medium or medium-fast action is the perfect selection for your 7-weight starter rig. As to selecting a rod from the shelves? It’s easy to spend $700 or more on a fly rod, but it’s not necessary given the quality of today’s materials and manufacturing. You can pick up an excellent rod for $150 or less. 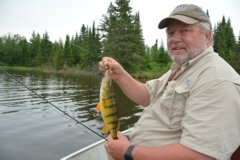 Picking lines for the right presentation

Fly lines can be unavoidably complex in their design and description, but selecting one doesn’t have to be. Some fly lines float, some sink (at different rates) and some float but also have a tip section that sinks. Floating lines (F) are the easiest for the beginner as they require less effort to pick up off the water when it’s time to cast. Further, the leader you tie to the end of your fly line will allow you to get your fly underwater if you want, though the depth you can reach will be limited. Floating/sinking (F/S) lines have a front section that sinks, so getting your fly deep is much simpler. The trade-off is you’ll have to strip in more line before you can cast again. With sinking lines (S), the entire fly line sinks; applications for these lines are generally limited to deep lakes. Ideally you’ll have both a F and a F/S line, but that means two reels, more cost, etc. So start with a floating line; as you gain experience you may want to add a F/S. Fly lines are tapered, with various taper profiles impacting the ease with which the line moves through the air. Save yourself studying line tapers for another day and just select a weight-forward (WF) line. Expect to pay between $40 and $60 for your 7-weight WF F fly line; well-cared for it will last several years.

Some say that fly reels are little more than a convenient place to keep your fly line, suggesting that even the cheapest is sufficient. I don’t agree, especially when fishing relatively large fish like pike and walleye that can peel out considerable line during a tussle. Better reels generally have superior drag systems, and that can have a significant impact on your ability to control and land fish. Look for a reel that features a disk-drag and for which spare spools are available in case you decide to purchase a F/S or S line one day. Expect to pay $60 - $80 for a decent reel although, as with rods, the sky’s the limit.

Your fly is not tied directly to the fly line, but to a leader. When fishing dry flies you’ll want a tapered leader, thicker at the butt end than at the tip, as that taper helps your leader and fly turn over and land on the water in a nice straight line. When fishing flies designed to sink under the water and then be stripped back in retrieve, as opposed to being allowed to drift on the surface, tapered leaders aren’t necessary, and straight lengths of monofilament will suffice.

Tapered leaders are described by an "x" code - the thicker and stronger the line, the smaller the x number (it’s counterintuitive). To cast small flies effectively, your tippet (the end section of the leader) must be rather thin, say 5x. Use a heavier tippet, meaning a smaller x size, for casting large streamer flies, such as a 1x or 2x. If you’re fishing straight monofilament leaders, rely on the appropriate "pound test" much as you would fishing with conventional tackle. When fishing dry flies and tapered leaders, pre-packaged 9-foot leaders are pretty standard. If you’re fishing a F/S line with streamers, I prefer a leader as short as two feet in rivers, moving up to 3 ½ or 4 feet in lakes. 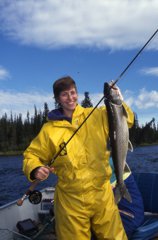 With time you’ll decide which flies are your favourites

When fishing for bass, walleye, pike or similar, you’ll generally use a fly that imitates a leech or a minnow. These are commonly referred to as streamer flies, and are designed to be retrieved through a repeated stripping motion. Getting started, your best bet will be to ask the Fishin’ Hole staff for their fly recommendations based upon the species and water you’ll be fishing. The options are near endless but, as with conventional tackle, with time you’ll decide for yourself which are your favourites.