It was one of those mercurial mid-winter afternoons, where the warm wind from the west had bumped the air temperature a few ticks above freezing and the world was warm and mellow. I was zipped up in my Fishin’ Hole ice-angling tent on the famous Pigeon Lake Provincial Park drop-off. Days like these are therapeutic in winter-bound west central Alberta and there’s always a debate whether to remain cooped up behind canvass, or sit out in the weather on a camp chair or a padded ice-fishing bucket. 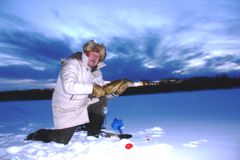 Ice angling comes into its own in the Twilight Zone.

I chose the black-out tent for reasons which will become immediately obvious. The action had been slow but not unexpected on Pigeon at this time of day and year, but now the sun was beginning to slide behind the park poplars and a coyote choir was warming up somewhere on the Woodpecker Hills. I was about to enter the Twilight Zone.

Where there had been nothing but a weak green light and a sandy bottom suddenly there was movement down my auger hole. A white-finned fish glided into my cone of vision and tentatively inspected the frozen shiner minnow suspended a few centimeters off the bottom by a chartreuse lead-head jig. The stand-off continued for a time. I imperceptibly twitched the line of my little ice-angling rod causing the minnow to move. The Pigeon Lake walleye pounced.

This is where the hard part comes in. Instead of immediately setting the hook and commencing battle, I let the bronze-backed fish mouth it for a moment.Thus allowing it to work the jig farther into it’s mouth hopefully ensuring a better hook up. Then struck. The walleye vamoosed out of sight but I felt weight and knew that the hook set was good. After a few breaks for freedom and a little drama at the hole, the Pigeon Lake walleye was soon flopping on the tent floor. I shook loose the jig, admired the predator for a moment, then slid it back into the green gloom. While deep water ice angling or in water with enough turbidity to obscure terminal tackle activity has merit - there’s no such thing as a truly bad fishing day - there’s nothing more exhilarating and nerve-wracking than watching a big winter predator approach a bait in the twilight zone. It takes sight fishing to a whole new level. 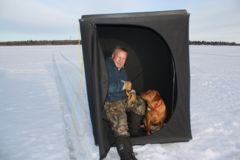 An ice angling tent is an essential ingredient in sight fishing

Where to do it: The big difference between open water angling and the hard water variety is the intimate nature of it all.The long casts and deep trolling of summer, more often than not to an invisible quarry, is nothing like the up-front and personal nature of ice angling. Particularly when conducted in a tent or shanty where the reflective glare is eliminated and the angler can observe the actions of the fish undetected. Stating the obvious, to winter sight fish you have to set up in water shallow enough to clearly see to the bottom. Depending on the clarity of the water that usually means at depth of not much more than three metres. But not necessarily all water. Just as with summer angling there are subsurface variances that concentrate food sources. Where there’s bait, sooner or later the larger species that prey on it will show up.

This is generally referred to as "structure" and anywhere there’s a drop-off, rock pile, weed bed edge or other break in the bottom is a good place to drill a hole. Having prior knowledge of the waterbody’s variances is a clear advantage, but even on an unknown lake an angler can increase opportunity with an accurate lake structure map which are available in old school paper versions or on-line models.

Focus on mid lake humps and sunken islands, or tight concentrations of contour lines along shorelines which indicate a dramatic change in depth. Then auger a series of holes to hopefully pinpoint the structure and set up. Sight fishing in winter - especially on Alberta lakes which in summer have a high nutrient load - is exponentially extended. When the temperature drops the suspended plant material also drops out of the water column turning the lake clear and transparent to a far greater depth than during the algae months. 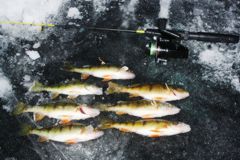 Twilight Zone Tackle: Ice fishing can be as rudimentary or state-of-the-art as you make it. I still run into traditional lake whitefish ice-anglers whose whole tackle arsenal amounts to lengths of notched lathes wound with monofilament or braided spinning line and baited with home-brewed wire worms in a variety of cosmic concoctions. Sometimes parked next to serious gear guys with clam-shell tents, underwater cameras and a bewildering collection of lures, jigs, plugs and tip-ups. I tend to side with the minimalists and pretty well stick to jigs and minnows when angling for predators like pike or walleye. Because most of my ice angling occurs in tents I favour short ice-angling rods matched with a pint-sized spin caster reel.

The shortness of the rod is not because of some macho-man factor but simple practicality. It’s all but impossible to set the hook with a standard-sized rod in the cozy confines of an ice tent without hitting the roof. A good ice ladle and a shovel to clear the auger cutting is also an important asset. It’s best to have as few visual obstructions in the hole as possible to observe the action below.

A tent heater, especially on those frigid days in January to mid-February, will also exponentially extend your ice time. Of course, it goes without saying a vehicle with a gnarly set of snow tires makes your ice-fishing adventures happen with minimum anxiety. Before Christmas though, it safer to drag out than drive. Many years early season Alberta lakes have a treacherous layer of slush under the snow. Invisible until you drive into it and by then it’s too late. Because of the constant winter winds, lake snow inevitably gets piled in windrows with the consistency of setting concrete. Getting stuck can be an unwelcome adventure.

Ice angling for big pike can get up front and personal.

How it’s Done: Unlike many modes of summer angling, there’s nothing particularly mysterious, technical or complex about angling in the twilight zone. For many having a stress-free fishing experience at a time of year when the weather and day light hours are clearly against you is a blessing. Don’t over-think, just fish.

After going through the necessary prep work - augering holes, clearing the cuttings and surface snow and setting the tent - the plan is to get the bait at the bottom and keep it there. Sometimes a cruising pike or walleye can be brought in by dropping the bait or flipping it. Another tactic that will often attract fish is to bounce the jig off the bottom a few times - raising puffs of mud with each drop - then suspending it above the bottom. Alertness is also an essential asset.

While walleye will slowly sidle up to a jig and minnow rig, allowing you a time window to react, the plan of attack by a pike is fast, furious and extremely violent. In either case you have to be on your game to set the hook. Playing a fish on ultra-light ice angling tackle is also an art in itself. Especially when it’s a large fish. Letting that pony run is the best way to avoid a break off or coming unbuttoned. Checking the drag setting on the reel several times during an ice fishing adventure is also a way of increasing the number of pike and walleye that come up the auger bore. The time when many fish come off the hook is the point in the battle when you think you’ve finally got it licked, right at the hole.

Relaxing the line tension is a way of calming a stressed fish, allowing it to be lead to the opening in the ice. Once you’ve got the snout in the hole you’ve got it. Fish are not physically equipped to swing backwards and will come docilely up the bore. The skill is to get it started. Especially with pike, which often wrap up in the line. So nice and easy does it. Ice anglers, especially in extreme sub-zero temperatures should also be very well aware of the effect the cold air has on fish out of water. Particularly if the intent is to release the fish to fight another day.

Twilight zone sight-fishing is not confined to pike and walleye. Pothole trout are a natural target, including an adaptation of summer time stillwater fishing. Basically using the same balanced leech and chironomid flies of summer without the necessity of using a strike indicator to keep the fly suspended off the bottom. Shallow-water lake whitefish angling has been a western tradition for generations, specifically when the late-season bloodworms are being targeted and the jumbos come onto the flats and are susceptible to wireworms.

Maybe the most fun can be had with yellow perch. Simply suspend a wire worm or bare hook baited with a cluster of Fishin’ Hole maggots off a visible bottom and wait a few minutes. Quite likely a cluster of golden-striped little fish will surround the bait like wagon spokes. Each taking turns at banging the hook as you watch from the warmth of the tent above. Sure you will likely have to do a serious sort to get enough fillets for a Cajun blackened po’boy or two. But when you’re angling in the Twilight Zone, it’s supposed to be nice and easy.