The scenario is frequently repeating itself. You’re not catching fish on a yellow and red five of diamonds spoon, so you switch it up and go to copper. When that fails to produce, you decide to give dark green a workout. On and on it goes, until you’ve exhausted every colour in your tackle box. Unfortunately, the problem likely wasn’t the colour of your spoon, but rather the speed at which you presented it. The importance of the speed in triggering fish to bite, whether a spoon, a crankbait, a topwater, a spinner or even a jig cannot be understated. While it’s not the only variable impacting success, or even the most important in many situations, it is a key consideration and one that too many anglers overlook. Think about it next time you’re on the water; many anglers fall into the trap of retrieving, trolling and even jigging their lure at the same speed over and over. That’s a mistake, but it’s an easy one to correct.

Lake trout are notorious followers - varying your speed as you retrieve will often trigger strikes.

Fish are cold-blooded creatures, so as water temperature increases, so too does their metabolism. Everything else being equal, they’re more active in warm water than they are in cold. There’s a limit, of course, and in extremely warm, deoxygenated water, they can be sluggish, but within normal temperature regimes the axiom holds true. Anglers should be conscious of this and experiment with faster retrieve speeds in warm water situations. Water clarity comes into play as well. Again, the primary tenet is the clearer the water, the quicker your lure retrieval speed. It makes sense - while fish often detect the movement and vibration of a lure from a distance through their lateral line, they typically make their final decision to strike based on visual clues. In clear water they see more acutely and can be more discriminating, so it can pay to increase retrieval speed in clear water conditions and give fish less time to make a decision. 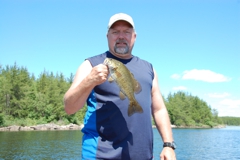 Increase retrieve speed when water conditions are warm and/or clear.

Artificial lures are designed to impart an action that attracts fish through a combination of vibration, colour and flash. As such, each has a range of speeds at which these attributes are maximized; retrieve a lure too fast or too slow and they don’t function properly. The best way to determine a lure’s effective speed range is through experimentation. Test each and every lure before you put it to work, either alongside the boat or near shore where you can see how it moves at a variety of speeds. When it comes to crankbaits, those hollow-bodied lures that generally look like a minnow, typical trolling speeds vary between one and three mph. Most float when at rest, but have a "diving lip" designed to take them below the surface as they are retrieved. Generally speaking, they dive deeper as speed increases, but this plateaus, often around three mph, when the water resistance on your line offsets the force pushing down on the lip. You’ve probably seen the results of too much speed, with your crankbait trailing along on the surface as opposed to being down in the strike zone. The rule of thumb with floating or floating/diving crankbaits is to retrieve them at a speed that gets them near the bottom - you can feel them bumping along when you’re in the zone. From there, you can adjust their speed by pumping your rod forward and back until the fish tell you what speed they prefer. When trolling, if you run crankbaits below their maximum operating speed, you can adjust their travel speed by trolling in an "S" pattern; they’ll pick up speed on the outside turn. Again, fish strikes will let you know the optimum speed and you can adjust your trolling speed accordingly. 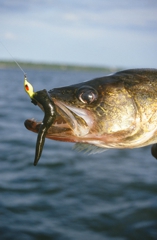 With sinking lures, such as weighted spinner-rigs, in-line spinners and spoons, a lure at rest sinks to the bottom. Picking up speed will cause it to rise in the water column until, at some point, they’re right at the surface. As such, you often have much greater latitude in retrieval speed with weighted lures than you do with floating lures. The trade-off is that as retrieval speed increases, you risk the lure rising above the fish-holding zone. To combat this, if you discover that fish want a relatively high-speed retrieve, go to a heavier lure. Spinners, whether in-line or as blades on bait presentations, have a relatively narrow range of speed at which they’ll spin as designed. Colorado blades, which are nearly round, are designed to spin at the slowest possible speeds, whereas narrow willow-leaf blades will operate effectively at higher retrieve speeds. If fish aren’t biting on your willow-leaf spinner, try a rounder blade style, slowing down your retrieval speed, and see if you get a better response. When trolling baited spinner-rigs, typical troll speeds vary from .5 to 1.5 mph. That may not seem like a wide range, but consider that the latter is fully three times faster than the former. Continue to adjust your speed until you identify that which triggers fish to bite. Pumping the rod occasionally to impart a short burst of speed on your bait, followed by an abrupt slowing down, or trolling in a series of "S" curves, also helps in pinpoint the speed fish are seeking. 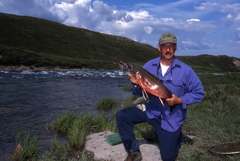 You need to switch to a heavier lure to stay down in the fish zone and keep retrieval speeds up in heavy current.

Spoons, too, have "best-before" speeds; these vary with the spoon’s shape, and experimentation will reveal the speed at which any particular spoon wobbles and flashes properly. Once you know how your different spoons function, rather than switching colours on slow days, switch spoon styles and adjust your retrieve speed accordingly. More often than not you’ll have better results when you’ve found the right shape/speed combination than you’ll ever get by repeatedly switching colours of a single spoon design. Speed affects vertical presentation success too, such as when you’re jigging. As a starting point, jig more aggressively with artificials than with live bait tipped jigs but, once again, keep adjusting until fish response settles the question. Irrespective of the species you’re fishing, or the lure/bait you’re presenting, experimenting with speed until you find what fish want is often more important than switching up colour or size ad nauseum. Don’t fall into the trap of reeling in or trolling at a constant speed all day long. Unless, of course, the fish are telling you you’ve got it nailed. 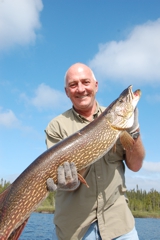