As anglers it's in our DNA to dream of big fish, exotic places and waters where fish bite on every cast. Many have a bucket list describing those dreams in fine detail. For some that may include a massive blue marlin rocketing skyward, reminiscent of the best of Hemingway's tales. For others it could be a Bahamian bonefish ripping into the backing as it races for the mangroves, a toothy tigerfish smashing a topwater lure on the Zambesi River, or a leg-long brown trout sipping a dry fly before bolting seaward down a remote Patagonian river.

I find it a little puzzling, however, that so many anglers dream exclusively of faraway fishing adventures, not realizing that some of the world's best and most exciting fishing destinations are found here in Canada. So before you turn your eyes to the globe, give a little more thought to what I consider seven fishing adventures worth dreaming about that are found right here at home.

Atlantic salmon fishing has a great legacy of time-honoured traditions and Canadian anglers are blessed with some of the finest salmon rivers in the world. Tops among them is New Brunswick's famed Miramichi. It has an annual run of salmon approaching 100,000, the largest on the continent, and is reportedly responsible for 50% of Canada's rod-caught salmon each year.

Fly-fishing Atlantic salmon is an adult's game. This is fishing with a purpose; every cast must be precise, every swing of the fly followed with clear-eyed intensity. The first time out you usually get your butt kicked. All you can do is dust yourself off and try again. And again. Eventually, if you're persistent enough, you'll hook a fish. Maybe you'll land it, maybe you won't. Inevitably, however, you'll fall in love with Atlantic salmon fishing. 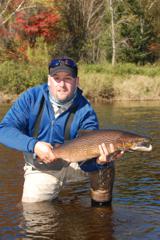 The Miramichi is said to give up 50% of Canada's rod-caught Atlantic salmon every year.

Nothing personifies the Canadian wilderness experience like fishing for lake trout, and the very best lake trout fishing is found on the NWT's vast Great Bear Lake. There, Plummer's Lodge, in operation since 1950, is the go-to destination. Great Bear is huge, the fourth largest lake in Canada, and given that it sees only a few hundred anglers each year, there are countless lake trout that get through their entire lives without ever once seeing a hook. 30-pound fish don't earn a second look here, and 40- to 50- pound fish are landed weekly, if not daily. Plummer's guides, equipment, accommodations and services are all best-in-class. 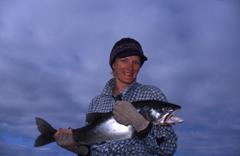 The white sturgeon of the Fraser River is the largest fish found in the fresh waters of Canada; that's reason enough to make this list. Add in the fact that when hooked they become aerial acrobats, as mind-boggling to imagine as it is fascinating to witness.

The white sturgeon is one of the most prehistoric fish still with us, dating back to the Upper Cretaceous period. They're not an attractive fish in the typical sense, but are exotic, awe-inspiring and have the potential to grow to an immense size, including a documented record of a 1387-pound fish taken out of the Fraser in August, 1887. Fish in the 50-200 pound class are caught daily and reports come in with surprising frequency of sturgeon estimated to weigh in excess of 500 pounds.

While their licence plates may read "Friendly Manitoba", some residents aren't following the script. They're belligerent, rude, bullying, confrontational and at times downright mean. Friendly? Not a chance. I'm referring to Manitoba's channel catfish, those knuckle-busting, tackle-wrecking leviathans that leave anglers bruised and battered from the encounter.

If you want to battle one, the Red River is the place to be, with 90% of the annual Master Angler awards handed out for catfish caught there. Red River cats average 15 pounds plus, with monsters approaching 40 pounds caught annually. An 85-cm cat will weigh 20 pounds on average, and there's lots of them. If we assume that 75% of anglers register their fish in the Master Angler program, there are at least 10 catfish of 20 pounds or better landed every day between May 1 and August 1. And most of these come out of a stretch of river less than ten miles long! Now that's a trophy fishery! 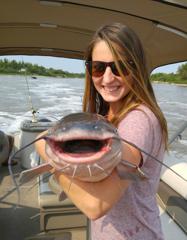 Master Angler-qualifying catfish are caught on a daily basis through the summer on the Red River.

Lake of the Woods Muskies

Muskellunge, or "Muskies" as most call them, are the reclusive big brothers of the widely distributed northern pike. Though they may look similar, that's where the comparison ends. Muskies are known as the "fish of 10,000 casts" for good reason, even in the best waters anglers can spend days and even weeks searching before hooking into one. But if you're hell-bent on catching a muskie, Ontario's Lake of the Woods is the place to go.

The immense lake is an angler's dream, with countless islands, reefs and bays that are home to a surprising number of fish species. There, lurking in the cool depths, you'll find muskies taking advantage of the abundance and diversity of prey. To hook one requires perseverance and patience, and when you do you'll be tested to the limits of your tackle and your angling skills. Muskies are the ultimate Canadian freshwater predators - are you up to the challenge? 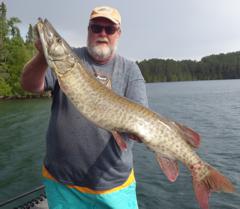 Lake of the Woods is Canada's premier destination for muskies.

They aren't rare, but at times can be challenging to find. They're not huge, although some can grow to 50 pounds and more. And they're not especially impressive fighters, though they seem to slip the hook at the last moment with irritating regularity. No, what makes west coast salmon fishing a "must do" adventure is the beautiful seascape they call home and how immensely satisfying they are on the plate.

There are five species of salmon plying the waters of B.C.'s coast, but it's largely the coho and the spring salmon that attract anglers. They're family-friendly fish, so do yourself a favour and at least once book with one of the many lodges offering trips; there are options for all budgets. What doesn't change according to the size of your wallet is the natural beauty of where you'll be fishing or the table quality of the exquisite fillets you'll be taking home.

The beauty of the west coast and fine table fare are the big attractants for B.C. salmon anglers.

From Labrador to the Rocky Mountains and north to the Arctic circle, Canadians have easy access to fly-in fishing that make your angling dreams a reality. Best of all, you don't have to break the bank. Whether you want to chase lake trout, walleye, northern pike, brookies, bass or a host of other species, there's a fly-in that will be just right for your budget. 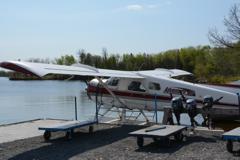 Every angler should consider a fly-in adventure to one of Canada's northern lakes.

You can choose from a variety of service options, including fully- or self-guided and complete meal packages or cooking for yourself. Some folks appreciate being taken care of from start of day to end, while others prefer a more DIY experience. What all offer, however, is the opportunity to fish remote waters teeming with fish that see very few anglers. Whether with a bunch of buddies looking for a summer getaway, or as a family vacation, fly-in fishing trips are packed full of adventure and fishing excitement. As the saying goes, "Just Do It!"