It was the first morning of my dream fly-fishing trip to Italy and, I must confess, things were not exactly going bellissimo. Sure there was a cosmic little green river called the Sieve, an iconic pub in the village named incongruently Ristorante Milk Bar where they sold the association day tickets and we would return to seafood pasta and a glass of vino rosso for lunch, the lush hills of Tuscany plus the pheasants and wild boar that live in them. But so far we had encountered no trout. Specifically one of those fat, buttery browns that they call fario which the Sieve is known for. 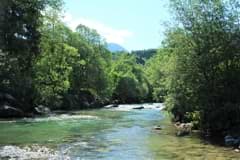 Run on the Sarca River.

There had been rain in the hills, all the creeks and rills were running and the river was colouring up. My guide Francesco wore a worried expression. I’d had seen a couple of rises like someone had dropped a small anvil in the river where the Sieve brushed against some fallen timber. But multiple passes of the pink Squirmy Wormy suspended under a putty strike indicator with my four-piece, 5-weight Temple Forks travel fly rod produced nothing. A couple more pools up-stream were just as unproductive. Francesco decided to cut and run and we drove to some water closer to the dam which was part of the water supply for Florence and the genesis of the cool water flows which has created many klicks of classic tailwater and is largely responsible for turning Tuscany into a fly-fishing destination. Here there was a set of staircase falls where Florence’s ruling Medici family once built a mill and a hunting lodge back in the hills.

Better still, the Sieve was running cold and relatively clear. Below the upper falls there was a fast trough. And when I lobbed the Squirmy at the top end and allowed the current to suck it under, the indicator abruptly stopped. Then disappeared. "That is a big fish," Francesco said above the roar of the river. He didn’t have to tell me. I was already hanging onto the jacked-up brownie desperately to prevent it from slipping over the next rock drop and an almost certain break-off. Luckily the trout, for reasons known only to it, chose to fight it out in the slot below the first falls. And after a few tense moments when the guide’s trout net proved too small for the fish, the big brown was finally writhing in the net bag. To be admired, posed for a few quick selfies, then returned to the river. Now that truly was bellissimo!! 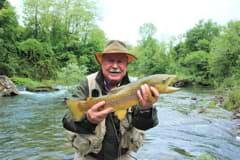 Fly Fishing Italy - When it comes to destination fly fishing, where New Zealand, the Bahamas, Argentina and Belize suck most of the oxygen from the room, Italy doesn’t usually raise a lot of ruckus. For the very reason that trout anglers don’t associate the rivers of Italy, especially those in the central hilly provinces of Tuscany and Umbria, as harbouring trout with a bonus catch of European grayling. These Apennine brown trout, with their distinctive over-sized spots, may not have all been in these rivers since the days of the Romans - although some were. But the unbeatable combo of fly fishing by day on uncrowded little green rivers. Then returning to an intimate hotel or farm-based agriturismo in the evening to sip wine and enjoy the steaks, chicken, pastas and seafood of Tuscany’s world-famous cuisine if mighty appealing.

Throw in couple thousand or so years of art and architecture and the world-class treasures of Florence and it can truly be one of those "trip of a lifetime" adventures that travel writers throw around more freely than they should. As well as the Tuscan streams, the alpine region of northern Italy - where the rivers are fed with chilly winter snow run-off and glaciers from the Alps - produce numerous more trout-holding waterbodies to be explored by the adventurous fly fisher.

The Rivers - On my month-long trip to Italy I sampled the trout angling on three famous rivers - the above mentioned Sieve, the Tiber which is the great river of Rome and the Sacra in the northern Dolomite Mountains. The trip took place from mid-May to early June, which for an Alberta fly angler is significant sacrifice indeed. Because this time period usually coordinates with our great aquatic fly hatches and the sublime trout fishing that they generate.

The Sieve, a short drive from my olive farm agriturismo in the hills above Florence, winds through a lush valley, heavily forested hills and overhung with trees I don’t know the names of. The Italian insect hatches I was hoping for failed to materialize during my time in Tuscany but the trout ate the Squirmy and a European nymph pattern called an Orange Tag with relish. The fishing is centered around the village of San Piero where head guide Stephano has a well-stocked fly shop called Solo Mosca (Flies Only) and, of course, the little trattoria where we ate lunch. 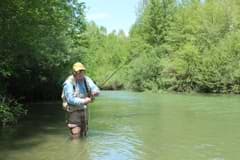 Hook-up on the Tiber River.

The Tiber, or Tevere as the Italians call it, when it runs through Rome is a sorry green ditch. But at Sansepolcro, where the river water is cooled down to trout tolerant temperatures by the Matedoglio dam, the Mosca Alto Tevere Club controls several kilometres of river below the impoundment. The fishing permits are dispensed from the Podere Violino (the Violin Farm) and the river holds both brownies and European grayling.

We made a quick trip down the Autrostrade del Sole (Motorway of the Sun) before heading east over the piney hills at Arezzo Stephano’s car. Again we had been some concern about the water releases but Stephano determined on his cell phone that the Tibris was, indeed, at fishing height.

The valley is quite broad and filled with bean fields and some light industry. But beyond the flood wall it suddenly turns wild and primeval. There were a few other anglers too. But they were mostly locals waiting for the hatch to begin emerging. And if it didn’t they would pack up and go home. Stephano didn’t wait for the mercurial mayflies. We began fishing with the Orange Tag -weighted with a tungsten bead head - under an indicator. And almost immediately I was into fish.

Feisty browns of a foot or so that ate the nymph at the pool heads, tail outs and under the overhanging branches. By lunch I had the count up to 14 with a bonus grayling as well from a glorious green river that flowed gently through a leafy forest. The Sarca River, comes rushing out of the Dolomite Mountains west of the city of Trento and arrives with a reputation. It was the venue for the 2018 World Flyfishing Championships where both Stephano and my Sarca guide Gianni acted as coaches for some of the teams. The fishing permit was purchased again at a bar called the Bel Sit in a drop-dead gorgeous village called Ponte Arche after its historic three-arched bridge.

There are many religious institutions in the valley and bells are regularly ringing calling the faithful to prayer or maybe just celebrating God’s glory. In these sublime rocky-top mountains - where orso the mighty European brown bear still roams - it’s hard not feel a divine presence. Unfortunately He was not smiling down on Gianni as we tried to coax reluctant brown trout and stocker rainbows from it blue glacier-tinged waters under a relentless early summer Italian sun. 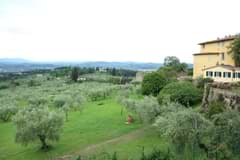 View of Tuscany from the agriturismo deck.

Only a few days before the river had been over its banks and it appeared the fish hadn’t settled down yet in their low-water lies. The Sarca did reluctantly produce a few fish but the suppers at the Don Pedro pizzeria, which we walked to each evening across the wooden footbridge festooned with geraniums in planters, more than made up for the shortage of willing trout.

The Trip - While there are several reputable outfits that offer custom fly-fishing expeditions to far flung destinations, my Italian Job - which also included much non-angling sightseeing and internal travel - was mostly self-generated. The internet is an amazing addition to a travelling angler’s life. Although we did rely on Stephano and Gianni for accommodation advise. Which was good. The guides’ names were both discovered from a Google search and both websites were in English. The plan going in was to rent a vehicle once we left Rome.

Driving the motorways was fine but after experiencing the medieval inner-city labyrinth of most Italian cities, we chose to travel by train, taxi and hired cars. While the guides picked me up at my accommodation. The Italian trains are fast, efficient, have an easy on-line booking system and for the most part clean. Although the Italians appear to remain baffled how to make railway station lifts work. But because the inter-city passengers run at times more than 300 km per hour, over much of their length they run in dark tunnels.

Both guiding groups have loaner rods, wading boots and waders available free of charge and were genuinely disappointed when I chose to bring my own gear. The guides had a good selection of local flies and not only knew the water well but the complex set of regulations and angling zone boundaries. Do-it-yourself angling is certainly do-able. But the local knowledge provided by a guide clearly made the experience more enjoyable. The complex regulations were exclusively written in Italian and the trattoria ladies who sold the day tickets spoke no English. Which would, of course, pose a problem. Plus the guide fees were slightly less than the North American standard.

The famous Ponte Arche bridge over the Sarca River.

Italy may not be on many travelling anglers’ radar as a world fly-fishing destination. But when you combine sensational surroundings, superb food and drink, and sensual trout in sanguine little rivers, my Italian Job trip was hard to beat.