It was the middle of an Alberta mid-summer in that madness which sometimes is Pigeon Lake and we were plowing our way down-lake through what’s known in the business as a "walleye chop". Pigeon is one of a handful of central Alberta cottage lakes that almost in spite of itself has evolved into a premier destination walleye fishery. Maybe even world class. Thanks to judicious conservative harvest laws and a wildly successful walleye re-introduction program in the late 1990s after our most popular game fish species had become extirpated from over-fishing. The end point of our voyage was a piece of bottom structure visible on hydrological maps which walleye anglers self-identify as a "hump". Walleye for reasons known only to them love humps. They can’t get enough of them. And we were there to exploit this weakness and obvious character flaw. The Lowrance fish finder, which had been holding steady at 20 feet, suddenly began recording a change in depth not unlike the profile of a hockey stick. 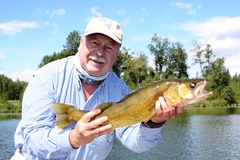 We backed off the structure to 20 feet, set the anchor as near as possible to where the bottom lurched upwards to 8 feet and I lowered a chartreuse jig baited with a frozen spotted tail shiner minnow to the bottom. When my braided nylon line went slack, indicating it had reached total depth, I lifted it off the sandy bottom with one crank of the spincaster reel. Then gave the rod tip an almost imperceptible flip. Causing the bait package to dart upwards then flutter back down to be suspended six inches or so from the bottom. The response was almost instantaneous. Although a less-experienced angler may not have been aware of what was taking place in the algae-stained gloom 20 feet below Pigeon Lake’s sparkling surface. To anticipate the bite of a walleye sometimes requires almost a sixth sense. An imperceptible feeling that something has radically changed. A slight movement of the line, a sublime sense of weight, a heightened awareness that you are now connected to something that seconds earlier wasn’t present. 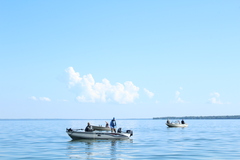 Next comes the wait. It’s a time of heightened anxiety and maximum stress. Jump the gun and set the hook too early and the walleye won’t have had time to fully inhale the minnow and the jig hook that it’s concealing. Delay too long and there’s a distinct possibility that fish will spot the ruse and nothing but a severed minnow head will be reeled in. Which would be a disaster. I waited as long as my jangled nerves would allow. Then lifted the rod with a sharp upward motion. There was weight at the end of my line. And resistance.

I was in the Zone. The walleye cane fast and furious after that. At the end of the day our four-person party had recorded 132 fish on the clicker (there were a few hammer-handle pike in the mix too) on the two pieces of structure that we had anchored over. And the catch and release count would have been even higher if a late afternoon thunder squall hadn’t precipitated a hasty retreat to the Provincial Park boat ramp. We were clearly in the walleye zone all afternoon. But while we were waltzing in a walleye wonderland other boats around us struggled. Some even got skunked. Because as the old saying goes, 90 per cent of the fish occupy 10 per cent of the water. So finding the glory holes, known as the Zone, can spell the difference between a memorable outing and frustrating fish-free day on the water.

What Is the Zone

The zone is any piece of water that attracts and holds fish. In the case of walleye it is usually associated with a rapid change in water depth. This can be associated with drop-offs, submerged rock piles left behind by the retreating Ice Age glaciers, and in bed-rock Canadian shield lakes ridges and points that jut out from the shoreline. In southern reservoir lakes coulees and the submerged river channel are also places where you will encounter the zone. While in the prairie portion of Alberta’s mountain-fed rivers the Zone takes on a whole new set of dynamics which I’ll get into a little later in this piece. 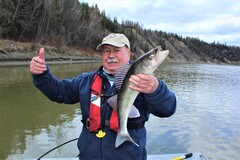 How to Find the Zone

I guess word of mouth is the tried and true method of locating a specific hot spot in a large expanse of water. Sometimes fishing where all the other boats are anchored can also pay off. Also observing shore-line features like points or bedrock formations can provide valuable hints of what’s happening subsurface. Although on Alberta’s glacier-sculpted stillwaters this is not as effective as it is in other parts of the country. Hydrological maps - either in hardcopy or available on the Internet - are also a great way to familiarize yourself quickly with a strange lake. Obviously there’s a great gulf of knowledge between knowing about an interesting piece of structure somewhere out there and actually locating it with pinpoint accuracy. The advent of on-board sonars and "fish finders" has gone a long way to flattening the learning curve and provide the walleye angler with a detailed window on the underwater world. While way points can also be captured for future reference. Technology recently took a giant leap forward with hydrological Apps down-loadable to smart phones providing walleye anglers with precise GPS accuracy for finding and capturing the Zone for future reference.

It’s the sudden and dramatic change in water depth that attracts and holds large numbers of walleye. Once the structure is located the best practice is to back off into the deeper water but as close to the variation in depth as possible. The old adage about 10 per cent of the water and 90 per cent of the fish applies just as much to the water column. While some fish may be suspended - there’s always and exception to any rule - Alberta walleye are natural bottom huggers. To be effective the bait - whether it’s natural, wiggly-tail jig or elaborate crank-bait - must be presented in the Zone. Which tends to be not more than a foot off the bottom. The traditional method is to simply suspend the bait vertically - either presented static, jigged gently or bounced occasionally off the bottom. Another effective method is to cast the bait onto the structure, allow it to sink to the bottom, then slowly walk it back to the boat with a pop-and-stop retrieve. Strikes will often be healthy bumps. But at other times nothing more than a subtle tightening of the line or slight unnatural movement. Alertness is the key here. 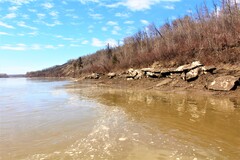 The Zone in Rivers

Alberta has a plethora of walleye rivers - large sections of which are lightly or if ever fished. But like lakes and reservoirs walleye concentrate only in specific areas of these sometimes vast and intimidating rivers. Flowing water adds a whole new dimension to the Zone. Because as well as abrupt changes in water depth walleye also favour deflections and current breaks. These can be structures like, eddies, creek mouths, slack water behind bridge abutments, current obstructions created by land slips or simply mid river slicks where the river flow pauses. Although bank angling is effective, it also is restrictive limiting anglers to maybe one and at best two pools. The most effective way to exponentially increase your river-walleye angling success rate is to run it. Either by drifting in a canoe or rubber raft. Or better still in river runner equipped with a jet. In Alberta’s glacier fed rivers where visibility is always going to be an issue a prop-driven engine comes with a lot of risk.

A current break with five or more feet of water with a fast/slow water interface running through it called the "seam" is ideal walleye water. Again my preferred bait is a jig tipped with a frozen shiner. But check the regulations because some rivers like the Red Deer have restrictions. A heavier jig may be required to hold the food offering in the zone. Anchor the boat at the top of the run then cast into the soft-water side of the seam and retrieve the jig back slowly with a pop-and-pause retrieve. Again the takes can be maddeningly subtle. So stay focused and give the fish plenty of time before pulling the trigger. Another way to effectively fish a river zone is to dead-drift a minnow or piece of nightcrawler along the seam suspended under a float. Either with a spincaster with an open bail. Or a specific rod and reel combo that West Coast steelhead anglers call "centre-pinning". Whenever the float hesitates, changes direction, or disappears under the surface strike. Chances are you will be pleasantly rewarded.

A walleye, even a large one in fast flowing water, is never going to a tackle buster. So it’s a case of sensitivity over strength when it comes to rod and reel selection. A medium fast rod matched with a spincaster reel probably works best. Plus when it comes to feel, a braided nylon line beats monofilament every time. It has zero memory and every tick, bump and hesitation is instantly transmitted up the rod to your casting hand. Protect it from line twist by including a swivel in your terminal tackle set-up. Chartreuse is my go-to jig colour, but hot pink, chrome and yellow are also effective. If you were lucky enough to draw harvest tags or are planning to fish some of the new slot limit lakes, an accurate fish measurer is also a must-have item in every fishing boat. 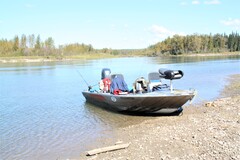 For many Alberta walleye lakes like Pigeon it’s been a long and sometimes tortuous road back to where it’s now possible to have triple figure days again. Especially if you’re able find your way into the Zone. So it’s vitally important to protect and nurture. The jury is still out on what the true rate of catch-and-release mortality. But it also depends on how a hooked fish is handled. Walleye intended for release should be subject to a minimum amount of handling, returned to the water quickly, and avoid over-playing them. Pinch barbs to minimize mouth and gill damage and use pliers or forceps to dislodge deep hooks. And if you can replace those multi treble-hooks with a single barbless hook on your spoons and crankbaits so much the better. Over-stressed fish should be held in the water until gill movement returns to normal and they can swim away in an upright position, and can return unscathed into the mysterious, dark depths of the Walleye Zone.