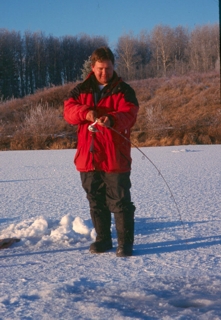 Ice fishing is in full swing and the early rainbow trout action has been fabulous. I've been hitting Star Lake among other favorite potholes and an ordinary afternoon serves up 10 to 15 solid strikes. Now if I could only land half of them that would be something. Right now I'm batting about three hundred. That is for every 10 fish that strike I stick three of them. Still it's great fun and my friends and I are regularly pulling up some dandies to 19 inches. 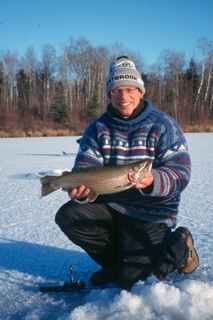 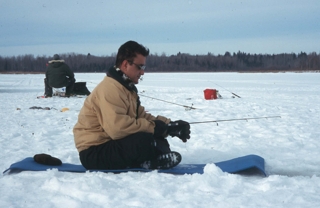 This type of fishing is straightforward. Buy a dozen trout worms or dew worms, go out to the lake and find about six feet of water. Drop the worm to about a foot off bottom, prop the rod up and attach a bell for strike detection. That's it, you're done. All that's left to do is walk away. Put two set lines down for each person that's fishing as per the Alberta Fishing Regulations and get ready. The fish seem to travel and bite in numbers. That is, it's quiet for a spell, then there'll be a flurry of activity and multiple bites. Then it's quiet again. The last three outings I've been on the ice for 2:00 pm and have hit at least two flurries each time out. That is pretty good action for a maximum of three hours fishing. 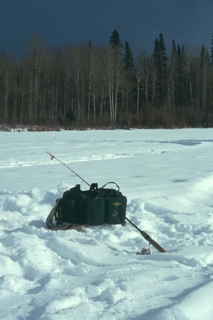 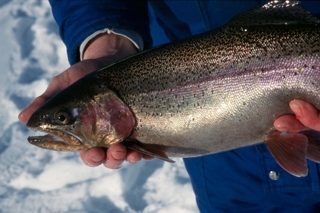 On my last two outings I started changing things up with good success. For one, I've been slow jigging with a small jig tipped with a worm. I put a jigging line in my friend Brenda's hand and she got two to strike in short order. With rod in hand, its far easier to react to the strikes. I've also spent some time staring down the hole twitching a fly. In the shallows this is quickly becoming my favorite presentation. I have dropped down a small double shrimp fly, a bead head pheasant tail nymph and with a full back. I've had great luck with all those flies. Beyond those, I've down well with the prince nymph and the wooly worm. It takes some time to sink an unweighted fly down through several feet of water, but the trout sure like them. Most rainbows that come in strike and I like being able to watch these hit.

Right now, that being the later part of November, there is about 6 inches of ice on the local potholes. That's enough to walk on and that is what I would recommend. Please don't drive a truck or any other vehicle on. As crazy as it sounds, somebody tried doing just that a couple weekends ago when there was only two inches of ice. They got just off shore before the truck went through. It was shallow so no one was hurt, but they needed to use some common sense. Ice safety is important and err on the side of caution.

That said, the time is now to get on the ice and do some rainbow fishing. The bite is going strong with lots of nice fish being caught. Hook up with a friend or better yet, invite someone new out. The rainbows are biting and all that is missing is you. 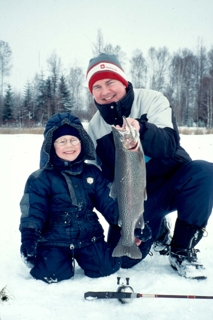