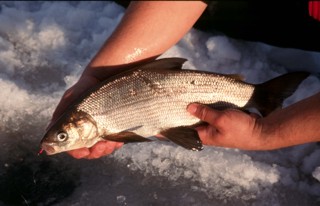 The standard wireworm is all that’s needed to catch all the fish you want, and the really cool thing is that there is no need to get up and be on the lake at first light. The people that get up early will catch a bunch of whitefish, but so will the later crowd. What I’ve noticed at this time of year is the position of where I catch these whitefish changes. Where I used to catch whitefish near the bottom to half way up the water column earlier in the year, I now find a large majority of my bites happening mere inches under the surface of the ice. That makes thing real exciting when I’m lying on a mat and a big white blows in and hit my hook just below the ice fishing hole. The surprise sometimes startles me so bad I jerk up and snap the line. 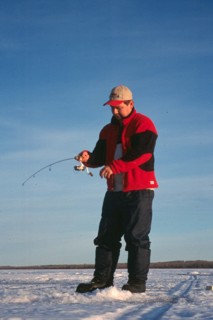 Later in the season with a lot of surface melt; water visibility becomes a real issue. There are a couple ways to beat this. One is to drill new holes from time to time to improve visibility. The other option is to forgo looking down the hole and instead rely on the use of a micro bobber with a wireworm a few feet below. I’ll stand up, stretch out my back and just watch the bobber. From time to time I’ll give it a little wiggle or twitch and often that’s all that’ll be needed to induce a strike. As the bobber sinks I simply lift the line and the hook will be set. 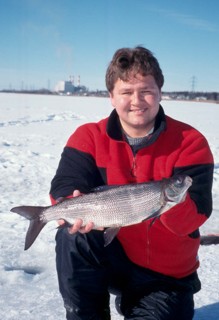 The crazy whitefish action will continue to get better and better as the conditions of the ice deteriorates. Eventually it will get to the point where I will no longer be able to get on the lake but I’ll know that if I could, the whitefish action would still be at its very hottest.