Survival Strategies For The Silly Season

It’s not untrue to say that there’s never really a day in the western angler’s calendar when you can’t find a fish somewhere. But with increasingly complex fishing regulations and a diminishing resource that must be managed wisely, the April 1 opening of what used to be the traditional angling season is becoming less and less relevant. Especially after provincial fisheries managers in Alberta imposed a spring angling moratorium on walleye and pike lakes to allow these popular game species to procreate in peace. At the same time the few foothills trout streams that open are either choked with run-off or still partially locked in ice. Same story for the stocked trout lakes which the changing season in many cases has created dangerous ice conditions.

It’s clearly the silly season where summer angling is so close yet at the same time so far away. But that doesn’t mean the angling year has to be totally put on hold. Here are some survival strategies to help anglers make it through the silly season. The April hiatus provides an excellent opportunity to review, repair and replace tackle. Time to empty the fly vest and refresh the boxes. If necessary spend some quality at the vice to replenish any deficiencies or omissions. I like to arrive streamside with at least a 6-fly inventory of all popular nymph and dry fly patterns. It’s also a good opportunity to create some space by conducting a thorough cull of your boxes. Weeding out all the old, tired and what-was-I-thinking flies with a special focus on rusty hooks. Gear anglers should also do a thorough re-sort of their tackle boxes, replenishing the supply of "go-to" lures, spoons and jigs. And don’t forget swivels and wire leaders. 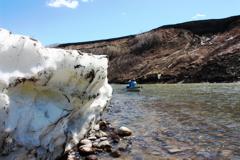 Reels, both fly and spincasters, should be inspected, cleaned and greased. Fly line, which has been tightly coiled for months, can be pulled from the spool and stretched to remove the "memory". It’s also the time to go to the Fishin’ Hole and replace mono or braided line on the spincasters. It’s amazing how a fresh line improves accuracy and performance. They say nothing is an inevitable as death, taxes and leaky waders. Time to examine seams and other high-abrasion areas for rubs, paying particular attention to the neoprene booties. Then make the decision whether it’s time to repair or replace.

Western anglers have a close and symbiotic relationship with their fishing trucks. A silly-season inspection of your rig - focusing specifically on the rubber - is a wise precaution. When you’re stuck many miles down a lonely oil road, you will wish you had. The same pre-season precaution should apply to water craft. Inflatables should be inspected for wear and frayed anchor ropes replaced. With the new invasive species laws kicking in, cleanliness should also be a major focus. Also a wise move to give boat trailers special attention. How many times have you passed the sad sight of a trailer on a jack because of a burnt bearing or flat tire? The same goes for giving the outboard a tune-up or assessing the strength of the electric motor battery. It’s why they call it the silly season. Not the stupid season.