It’s OK to Be Little Bitty

Angling magazines, websites, film festivals and calendars traditionally are stuffed to the gills with incredible images of super-sized fish. Gonzo pike, sensational salmon, terrific trout, superb sturgeon and wondrous walleye with happy anglers wearing goofy grins holding them up to the camera for the obligatory hero shot.
More times than not caught on a budget-busting charter or at a remote fly-in lodge.
A trip-of-a-lifetime adventure for sure but sadly an unobtainable dream for many. For most of us angling locally is our more likely option.

Where we must lower our expectations and scale back our bag limits.
And for the entry-level fisher large, hard-to-obtain fish are not their first priority.
For the seasoned angler dropping a #18 Blue Winged Olive dryfly on the nose of 20-inch Alberta spring creek brown trout tucked into an undercut bank - without spooking it into the next county - might be the highlight of an afternoon on the water.
But for a training wheels fisher it’s more often than not a mission impossible.

Especially for younger anglers with a shorter attention span who have not yet acquired the dogged determination, sun-bleached fishing hat and patched waders required to become a grizzled veteran. Size doesn’t necessarily matter. Action is what they hanker for.
And contrary to current angling media, like Allan Jackson sang in his country hit, "it’s OK to be little bitty."
Luckily we are blessed with several species of fish and angling experiences that are custom made for easy angling and high catch rates that may not generate any "trophy" photo-ops. But produce a lot of action.

If there was an everyman’s fish in western Canada its surely must be the humble yellow perch.
Sometimes it’s also the favorite bait fish of our apex predator species. But in it’s own right these prolific plebians are also fine sport fish both in the sultry summer time and during ice angling season. And where you will find one perch there a very good chance you will find many more as they tend to hunt in schools. Anchoring close to pencil reed stands and weed beds and setting a micro-jig a few inches off the bottom is a proven technique. There are a vast array of perch lures but baiting them with a cluster of maggots will enhance your chances. 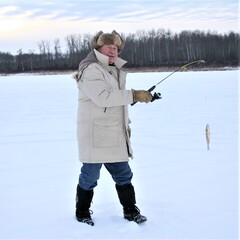 A similar technique works well during winter angling where often the perch will cluster around your lure like spokes on a wagon wheel, taking turns trying to assassinate the bait. The action can be nonstop and just what you want while zipped up in a frigid ice angling tent.
Harvest limits are generally generous for perch as they are prone to over-populating a water body and stunting.
It may also require a vigorous sort to be able to catch enough specimens to take home for a fish fry. There are images of dinner-plate-sized perch out there to wet any anglers appetite but in reality a 6 incher is a good ‘un. The up-side is that you may catch 50 "good ‘uns" in an afternoon.

Perch can also be easily taken on fly fishing gear, making sure to downsize your equipment to match the size of the quarry.
Either suspending a small nymph like a pheasant tail or chironomid under a strike indicator or casting a sinking line then slowly retrieving a pair of nymphs. The takes will be subtle and the fight may be brief. But for somebody who doesn’t experience a lot of angling action, any fish is a fine fish.

Trout in most parts of the temperate world are considered the kings of the game fish.
Beautifully shaped, brilliantly coloured and in many cases quite difficult to catch - requiring exacting techniques, intricately constructed flies simulating exact insect species and archaic equipment made from cutting edge materials like carbon fibre, aerospace aluminum and PCV coatings. But not all trout.

Government fish and wildlife agencies also stock millions of hatchery raised trout in ponds, potholes, reservoirs and borrow pits each spring with the express purpose of catching them as quickly as possible. These catch-and-keep facilities are sponsored by municipalities and fish-and-game clubs to encourage outdoor recreation and angling specifically and as such they try to make them as close to the lowest common denominator as possible. So that by the end of the season most of the fish have been caught and carry over trout are a rare exception. 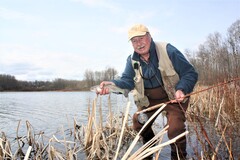 These are also perfect playgrounds for the entry-level angler.
Early season stocked trout tend to gather in the bays where the hatchery truck dumped them and are very vulnerable.
Snatching at any retrieved pair of nymphs that come through their field of vision.
Later they disperse throughout the water body. In most cases trout stocked in still waters without inlet or outlet streams do not reproduce. So the annual stocking is essential to maintain population levels.

The location of these facilities and the number of fish released and their species (rainbow trout are overwhelmingly the most popular) are generally published in angling regulations booklets and government websites.
Early season and fall are the optimum times to angle for stocker trout as the dog days of summer tend to warm many of these waterbodies, reduce dissolved oxygen levels and make the fish lethargic.

But even so, the fabled "evening rise" on one of these stocked water bodies can be a scene to behold with the entire surface of the lake dimpled with the rises of feeding fish and the tranquility of the evening shattered with the slurping of hungry trout.
To make angling access easier for anglers without watercraft, many of these stocked trout fisheries have casting docks.
Although wading in these highly eutrophic ponds should be approached with caution as the bottoms are often unstable.

One of the great north Canadian adventures is flyfishing in the sun-warmed shallows of a spruce lined lake for monster post-spawn pike. Nirvana on stilts. But not all pike are considered equal unfortunately. On the other end of the water wolf scale is the diminutive little guy known to seasoned pike anglers as the "hammer handle". Because their size tends to match the length of the tool that carpenters used to carry before the air nailer came along. These fish have traditionally been looked on with disdain. Especially when caught on gear designed for larger members of the species. And also greeted with derision for their nativity. 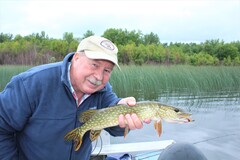 But there are many waterbodies because of biomass limitations and other constraints where a hammer handle pike is about all there is. Usually in prolific numbers. The concept of have a super-aggressive predator in competition with many other fish eaters in a similar situation should not be lost on anyone wanting to catch lots of fish. Traditional pike angling techniques of lures and spoons cast and retrieved by a spin-caster set-up - or a jig tipped with a frozen shiner suspended under a boat - are the obvious ways of catching them.

Fly rods also come into their own when angling for hammer handles.
Rods of medium strength like 7 or 8-weights are recommended - not necessarily to subdue the hooked fish but having the required backbone to turn over the heavy, air resistant flies used for pike angling. Particularly when attempting to punch them into a stiff breeze.

Flies in the standard pike lure colour combos like red and white, red and yellow, chartreuse and white and purple and black all work well and come in a myriad of dressings. Adding eyes increases the fly’s attractiveness.
My go-to tie is a Lefty’s Deceiver. The outward-facing saddle hackle feathers in the tail add a pulsating effect to the fly that drives little pike into a feeding frenzy. Big ones too. A strip-strip-pause retrieve works best. And always tease your fly on the surface for a second or two before picking up. You will be surprised how many lurkers will hit it.

Another over-looked species that swims Alberta’s Eastern Slopes rivers in prolific numbers - especially during the late summer-fall spawning runs - is the mountain whitefish. And unlike the West Country’s native and introduced trout species, Rockies have so-far not experienced the disturbing population declines that have impacted many of their cold, flowing-water neighbours.
They can be little bitty but also reach up into the 15-inch range in some drainages.

Rockies are fish of our large and medium sized mountain rivers like the McLeod, Red Deer and Bow. Inhabiting streamy riffles and rushing pool heads. In the late summer when the run is on they stack up in large numbers and the action at times can be non-stop. 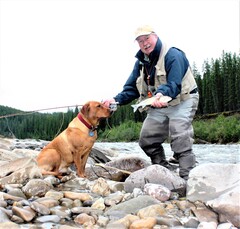 The standard way to angle for rockies was with a pair of trout wet flies tipped with maggots.
Then swung down and around in the current with the help of a couple of split shot to get the bait down into the pay zone.
But with bait bans being imposed up and down the mountain watersheds for conservation reasons, large numbers of whitefish can still be caught and released using a pair of weighted nymphs under a strike indicator.

The ancient but still highly effective Gold-ribbed Hare’s Ear nymph is a favorite rockie fly.
The key again is to get the flies swimming within a few inches of the bottom of the run.
Whenever the indicator pauses, bobbles or submerges set the hook. Chances are good a whitefish will be pulsing at the end of the line.

It’s likely every angler’s dream to someday land a hefty hawg or large lunker to preserve forevermore in a taxidermy case on the wall or pixel image in a smart phone.
But it’s also nice just to be catching fish too. Especially a lot of fish - even though in todays modern context you are legally required to put most of them back.

That’s where species like yellow perch, stocker trout, hammer handle pike and mountain whitefish come into their own.
There are generally lots of them, they are easy to catch and it’s a heck of a lot of fun doing it.
Because when you get right down to it, "it’s OK to be little bitty."