Hitting it Right with Water Boatman

They are also called backswimmers and this event can’t be missed. Trout, along with the lesser known and pursued lake whitefish, turn onto water boatman in a big way. Come the warm sunny days of fall you will find them slashing at these fleeting meals with reckless abandon. 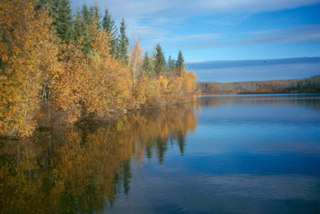 A water boatman is a beetle like looking bug that lives in lakes, ponds and slow moving streams. They have two big legs that aid them in ‘kicking’ their way through the water. They breathe air and they are equipped with flight ready wings. Come fall they are out and about flying around. The sunny weather is often the trigger of a mass migration of backswimmers from shallow summer locals, such as ponds and sloughs to deeper water. And as they fly over a trout lake, they tuck up and dive straight into the water.

Just as soon as this bug breaks the water tension they get their big kicking legs in gear and kick for all their worth to get to the safety of the bottom. Trout know about all this and know just how good backswimmers are to eat. So when the time comes they’re looking up ready to attack at a moment’s notice. They hunt, looking for the signature raindrop and then charge headfirst in an all out attack on the bug. This all sounds very National Geographic, predator vs. prey high drama stuff because it is. The chase is furious as wily backswimmers kick and dart their way through water, while trout with mouth agape are in hot pursuit.

Last year I watched what I’m sure had to be a massive seven pound plus rainbow trout doing sharp aggressive circles about 25 feet in front of me. The movement, the body language, the boldness of the actions showed that it had only one thing on its mind. In my excitement I forgot how to cast and threw my pattern a foot behind it’s tail, not once, but twice. No matter how hungry or motivated a fish is they rarely hit what they cannot see. It faded off still darting about like an angry tomcat ready to pounce. I never did get another shot, but what a great time to be fly-fishing. 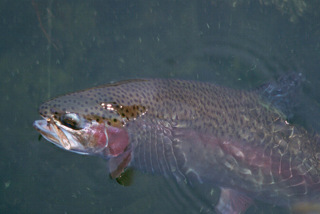 With that said, the best way to fish a backswimmer pattern is to cast it out and mimic the natural. Retrieve the fly in short sharp jerks and hold on. These strikes are violent. You will probably break your line on some of them, especially if there are big trout around.

In as many ways as you can think to fish a fly, there are ways to fish a backswimmer. My favorite method is using a floating line, casting a bead head backswimmer imitation out and then retrieving it back immediately using short jerky strips. In the height of the frenzy, trout will already have the fly and be charging off before you or I will even get a chance to make the first strip. Floating backswimmer patterns are another option and lend themselves to explosive surface strikes. These same patterns are exceptional when fished off a sinking line, either cast or trolled. The line gets down while the pattern rides a little higher. 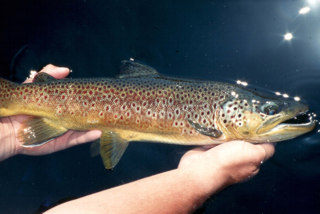 With the spinning rod you can cast the fly with a splitshot or you can use the same rig and troll it using paddle power or an electric motor. I’ve tried all of the above and they all work. This really is one of the big events of the year. Not only do trout throw caution to the wind, but even the biggest trout will get on them. It’s too good a feeding opportunity to pass up.

The lakes I fish in central Alberta usually have the best backswimmer fishing from early to mid September. The action can be so good that you will actually stop fishing to take a rest from the continuous onslaught of feeding trout. Then you may even become selective, hunting out only the largest slashes and swirls in your bid to catch the biggest trout. When it’s this good, enjoy it. We all know there are enough of those other days in our angling season. 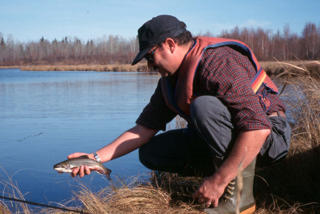 Backswimmers are fall’s great equalizer. The fishing becomes easy, the catching is good and all is well 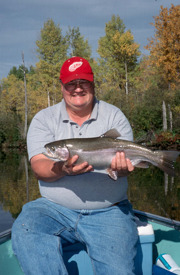