It started back in grade 7. I had just moved to Grande Cache, Alberta from the lower mainland of BC and to quote my dad, “now you’ll see what a real winter is like.” Snow that lasted more than a few days excited me, plus the fact that it can be a dry snow. When that first winter came and Victor and Grande Cache Lakes locked up, it didn’t take long for me to wonder about ice fishing and the possibility of catching a trout through a hole in the ice.

I didn’t have to wait long. My dad took me down to Victor Lake with axe in hand. He showed me how to chop a hole through the six inches or so of ice. It was amazing – to lie on a frozen lake, on a mat, and peer down to the world below. I saw fish swimming around. Mostly minnows, but every now and then a sucker or a trout would swim by and give me a start.

We found that a rod left to sit there with a couple of the white mini marshmallows sunk near the bottom sparked the interest of the occasional rainbow. Then one day as I was tending another rod, I heard the distinct squeal of the drag engaging as line was being pull violently from the real. Some trout made a meal of my marshmallow banquet and bolted at the taste of steel.

I raced toward my rod as it bucked violently. Picking it up I felt the full weight of the fish as it powered off in another long run. My hands were shaking. My buddy Shane Bolduc was offering encouragement. Each run pulled the rod hard and heavy. Minutes passed and I wondered how big this fish could be. Real, lift, real, lift and so it went as I slowly, deliberately pulled the trout near. The big trout would gain another head of stream and push off in another long powerful run. 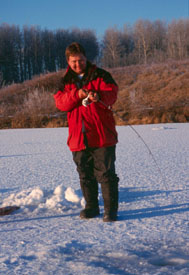 Twenty minutes passed and we both sensed the fish was close. Shane lay on the ice and peered into the depths. The fish flashed by. Shane got on his knees and with a face full with apprehension, held his hands out so large. “Whatever you do, don’t lose this one,” was all he said. Another five minutes passed and we could feel the trout giving in to the fight.

Somewhere, somehow, the trout came to the surface and one of us pulled it free of its watery home. We danced, yelled and celebrated. This was a truly momentous trout and launched us into the world of icefishing. 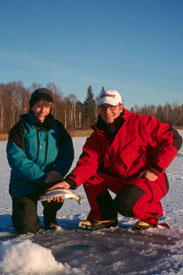 Since that day I’ve fished through the hard stuff for pretty much everything that swims – and one time I’ve even managed to catch an unexpected grayling of all things.

But I revel in those days I get to go to a lake and fish for rainbows. Rainbows are fun to catch at the best of times and for me, the best of times is every chance I get. There’s a challenge in hooking a wild strong fighting rainbow with light line. The fight will often be longer, because these trout are unwilling to allow themselves to be pulled up through a little ice fishing hole. They will twist and turn violently, just looking for a way to shake the hook or break the line. It takes patience and sometimes a little luck, but a big healthy trout on ice is an incredible reward.

Since those early days of ice fishing for rainbows I’ve given up the axe graduated from manual auger to power auger. I get the opportunities to fish for rainbows in an endless supply of lakes near and far and I’ve found some real gems along the way.

I still have marshmallows, but no longer as bait. Instead jigs, flies, trout worms and powerbait have replaced the often-effective marshmallow. This thought, however, sparks great curiosity about whether these same marshmallows would catch trout in my new haunts. I may have to just give that a try.

But what is surprising to me is how I’ve remained totally consistent over the years when it comes to where I fish. I have fished deep to shallow and everywhere in between and I’ve caught fish every where. What I have found, though, is that I catch the majority of my best fish in shallower water. Say less than ten feet on average. Most of the times I’ll be able to see clear to the bottom and usually I’ll try to find a spot that relates to the outside edge of a weedbed. Trout usually cruise these edges and a naturally presented bait will get bites.

The outside edge of a weedbed is where I stuck that first momentous trout I spoke of earlier. My friend Shane and I went to the local paper and had our photo taken. It weighed an impressive nine pounds and remained my best rainbow for the better part of a decade. 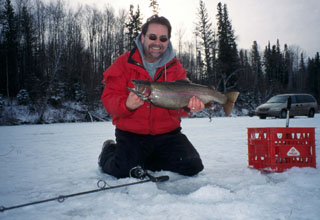