I am an avid ice fisher and I’ll chase everything that swims through the hard stuff. I’ve caught browns, rainbows, brookies, lakers, walleye, whitefish, pike, perch, burbot, and even arctic grayling. I’ve found a lot of things work, but one of the least utilized; yet more effective presentations is the setline. That lonely rod, tip up or a spool of line left to its own devices is an extremely effective way to catch fish. Oftentimes it’s the best way to catch fish.

What exactly is a setline? It’s a line that you place somewhere, anywhere, that’s pretty much left unattended while you either jig at another hole or fish out of an ice fishing tent. The setline is usually, but not always baited and beyond that, there’s not a lot to say. It’s the ultimate in simplicity.

Now I live in Alberta and according to the provincial sportfishing regulations, anglers are entitled to use up to two lines while ice fishing. That’s the reasoning behind using a setline. It allows you to fish at another location using possibly a different bait, depth or technique. And the setline could even be targeted for a different fish entirely. 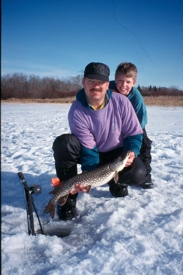 For example, look to my favorite winter fishing combination, the pike and whitefish. Where you find one, you usually find the other. The whites like to hang over shallow to mid depth weedbeds in the lakes I fish near Edmonton, while the pike like to hang on the deeper edges of those same weedbeds, picking off whitefish. I’ll be cozy in my ice fishing tent or lying on a mat with a small wireworm or fly catching lake whitefish. By utilizing the setline I’ve allowed myself the opportunity to catch pike while fishing for lake whites.

Meanwhile, I’ll put a setline down on the deep edge of a weedbed, close to bottom and use a big smelt or herring as bait. As the pike move through, they can’t help but take advantage of an easy meal and suck it up. Topside I’ll usually have a bell on to alert me to the take and I’ll get on my horse for the hook set. 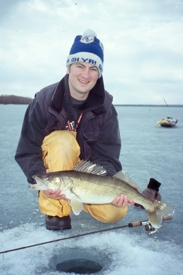 The setline does it thing, but it does it effectively because we put the right bait down in a location where fish are likely to travel. The other advantage of using a setline, which is often overlooked, is that noise factor. Once placed, you walk away, leaving the area quiet.

I do the same thing for trout. I’ll fish with one line, while I’ll place a setline with a lively dew worm or trout worm a little ways away. There are days and plenty of them where I find myself continually running to the setline to pull in another fish. The quiet factor playing a major role in getting fish to bite. If it gets too obvious and the setline is the preferred method, I’ll switch up and convert the second line to a setline. Then it’s a matter of pulling up a chair, grabbing some hot chocolate and waiting for the bite. 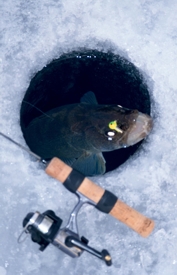 Always the experimenter, I’ve taken to pushing the fly fishing envelope into the winter months and I’ve moved it right up to using setlines. A bead head prince nymph, pheasant tail nymph or a non-weighted full back nymph all in the smaller sizes left to suspend a foot or two under the ice in shallow water, say less than five or six feet has caught way more trout and whitefish than I’ve openly admitted. My trick: tie on a two or three foot piece of 5X tippet material (it’s really thin five pound test) and then tie the nymph on and twist the knot towards the point of the hook so that it suspends horizontally. It’s a natural, lifelike looking presentation that gets a lot of fish to bite. 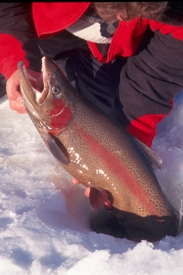 A cautionary note about using setlines: if you’re using rods, be sure to have the drag set loose. That way if a big fish hits, it will be able to pull line as it runs, giving you time to hustle over for the bite. There have been a couple occasions where my drag was set too tight and the fish took the works, the rod and reel down the hole with them. That will break your heart, but it’s all part of the never ending learning process that goes on when you’re outside.

Setlines are effective. Put in the right locations using either bait or flies, they will help you find and catch more fish.