Ice Fishing is Getting Hot

"We came back from Calling Lake yesterday with 24 perch and some gooder's," exclaimed Ayr Miller, a good fishing buddy. "The whites are going great at Gull," is the message left over the phone by Wally Warawa, a terrific guy from the Edmonton Oldtimers Fishing Club. "March is almost here," Arnold Carlin tells me excitedly, "the burbot should be moving into the shallows at Lac St. Anne". That is always a good time. That's the thing about ice fishing in March, the fishing is getting good everywhere. It's all about making choices.

On Ayr's good news, we headed back out to Calling Lake, along with Trevor McLeod and Kevin Wilson. It's Kevin's first time fishing Calling. We hit the lake before the early morning sun and had to drill holes using the extension on the ice auger. The ice is over three feet thick. A pattern is drilled from deep to shallow and back again until there was enough holes for everyone to fish.

Trevor was first to connect. The bend of his rod showed it to be a good one, but as it neared the hole, the hook shook free and away went the fish. Trevor then got into another fish and this time pulled a solid three-pound walleye to the surface. Kevin puts up the tent and the commentary starts almost immediately. "I just saw a pike and two walleye." He moves to another hole and sees a chunky walleye move into view and it inhales his crippled herring and minnow combo. The fight is on, then it gets off. He puts the jig back down and another, or it could be the same walleye, comes back in for another go. It's a gentle bite and Kevin's off to the races. We hear hoots and hollers and the rest of the gang comes over where he pulls a 5.4-pound walleye to the ice. "This is the biggest walleye I've ever caught through the ice," he states.

Ayr, not to be deterred, pulls out his tent and starts seeing fish. He sees a big walleye, then several more. A big walleye strikes, but Ayr misses him on the hookset. "That must have been five pounds!" he moans. Outside I get a good bite on my setline, which has a minnow on a small single hook, no leader. By the time I get to the bucking rod, it snaps to attention and the fish is gone. I pull up the line to see the hook was cut cleanly off. A pike's trademark. I tie another hook direct to my mono and send it back down. That's my trade off. More walleye will bite a hook on line, opposed to one attached to a steel leader, but if a pike hits, unless I'm lucky on the hookset, it's game over. 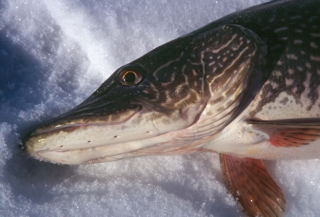 Trevor is continually getting hit, but none are sticking. A pike then thumps Kevin's line. It takes several minutes before an eight plus pound pike is pulled into the air. Kevin has a grin that a grizzly bear couldn't shake off. "I really needed this day," he says. "This is fun."

The morning bite has tapered off, so we head out to deeper waters about 30 to 35 feet, and set up shop for perch. We know they're down there because I brought my Aqua-Vu camera and they're swimming around everywhere. Most are small, but some are decent and we catch around 15 to 20 for our efforts. As a bonus we get several hits by walleye, but manage to release every last one before we could get them to the hole. That's fishing! 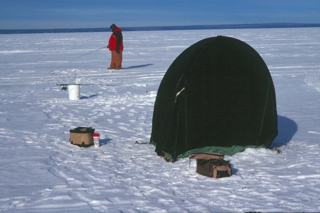 It's now four and the sun has starting to drift towards the horizon. We met a nice fellow at our perch spot and he invited us over to another spot he fishes for walleye. The group consensus, however, was to return to where we drilled our holes early in the morning. Well sometimes it just doesn't work out. There were no walleye to be found, but we did manage to hit a couple more pike with Kevin landing another beautiful pike around 8 pounds. Although the bite was not going gangbusters, it was a good day. Looking forward, I think I'm going to hook up with Wally and see if we can tame some of those Gull lake whites. 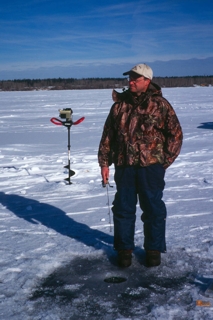 It seems in March, fishing through the ice gets better everywhere. The trout are turned on. The whites really get cooking and the walleye and pike fishing can be unbelievable. I never know myself where I'll be from one outing to the next, but you can be sure that whatever lake you or I decide to drop a line, fishing will be good. 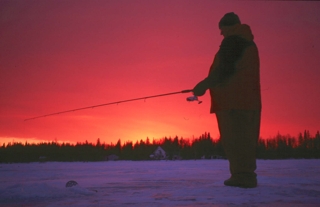