Embrace the Spirit of Adventure

There are lakes, streams and rivers we frequent. These are bodies of water, which are familiar to us and over time we've come to know their unique characteristics and what it takes to catch fish. It's good to have these places tucked away in your back pocket, call them home waters, but it's also good to make a fresh start and try something totally new.

It was with this spirit of adventure my buddy Ayr and I made the three and a half-hour journey to Jasper National Park this past March. The warm temperatures made being outside downright balmy and rumors of bull trout being caught in the flowing waters of the Athabasca was all the temptation we needed. Besides, the thought of casting to fish surrounded by stunning scenery and being visited by the occasional rocky mountain sheep or elk held a lot of appeal. It sure beat another hardwater trip looking through a hole in the ice. 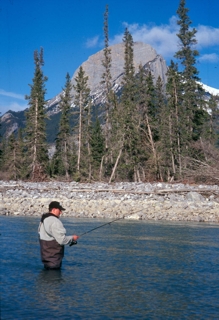 Loaded with the latest spoons, plugs and flies, we parked the truck at a roadside turnout and made our way to the river. Walking downstream we came to a promising pool, easily the size of a football field. That's the great thing about fishing this river. There's no real guesswork. Pools are large and if we were lucky, so would be the fish. 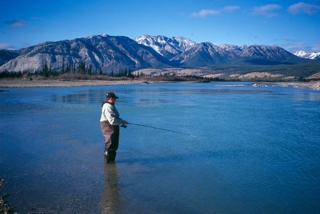 We both put on a couple of Rapala plugs that imitated a rocky mountain whitefish, hoping to cash in on the bull's preference for eating the whites. Rockies, as they are often called, abound in the Athabasca and they comprise the majority of a bull trout's diet. Usually if whitefish are around, bull trout won't be far away. 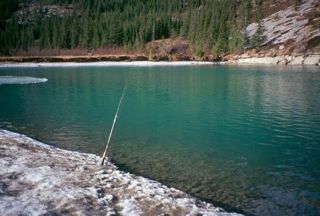 It took all of ten or fifteen minutes and Ayr's rod was bent double. The fight was short and soon he brought an eighteen-inch bull trout. A few photos later, some congratulations and we sent the fish on its way. I was casting a Rapala long cast minnow and hooked up myself. Soon I held a slightly smaller twin to Ayr's fish. The day couldn't have started better. We progressed our way through the pool and hooked up twice more, with one fish nearly ripping the rod from Ayr's hands. It was a big fish, but got off before we got a look. 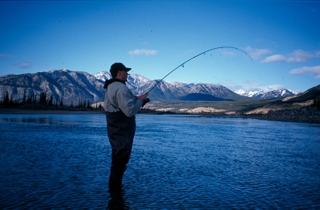 After a couple great hours on that pool, we opted to change locations and see if we could change our luck on the bigger bulls. We came to a deep pool right beside the highway where clear water gave way to a deep turquoise color. It begged to be fished. We set up shop and went to work. Our plugs, spoons, then flies were all rejected in turn. Knowing there were likely rockies in the same pool, I switched up to a small nymph fished on bottom, using a nail as weight and tying the fly off as a dropper. I got a couple bites, but missed them both. With no other fish to our credit and the sun settling behind the westward mountains we packed up and headed across a bridge.

On the other side of the river both of us stopped at a small pool hardly worth a glance. We threw a couple casts anyway and were immediately hooked up on bull trout. Over the next hour we hooked seven bulls, bringing four to shore. We looked at each other in disbelief. Here we'd spent the better part of the day working what we felt to be the best water, but all this time the bulls were hiding in the small water. No matter how often I go, I'll never stop learning and this experience was no exception.

Chasing bull trout in March was a lot of fun and by thinking outside the box, Ayr and I had a great experience. The amazing part about fishing the Athabasca was the total lack of fishermen and fisherwomen. For covering an easy five or six miles of river, we never saw another sole. This is big water with stunning scenery and loads of elbowroom. Still no others came to share it. Good for us. 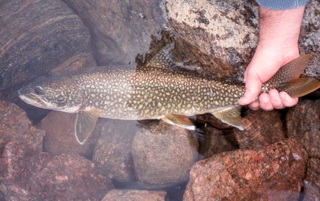 Likewise, every year I always make time to try something new. Whether it's a river close by or a great perch lake four hours away, you can bet that sooner or later I'll find my way onto its shores. This summer I'm off to Cold Lake to catch lake trout. I've never done that before, which is surprising because Cold Lake is a mere three hours from Edmonton. I routinely travel much further afield, but it will be great to finally go. Word is that the lakers are plentiful and ten pounders are common. That's more than enough motivation to get me to go. See you on the water. 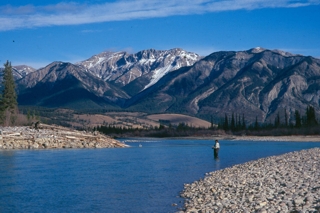