A Look Ahead to Great Trout Fishing

If ever there were a time to be getting excited about trout fishing, it's now. That's because the month of September is likely one of the two best months to be fishing. June is the other, for those that wanted to know. Warm days, cool nights, colorful landscape, the lack of mosquitoes and lakes full of aggressively feeding trout all make up a quality experience. So the time to plan and get ready is right now. Set aside a weekend or two and hit your favorite trout lakes. The biggest of the big trout will be out on the prowl and they'll be looking for what you're offering. 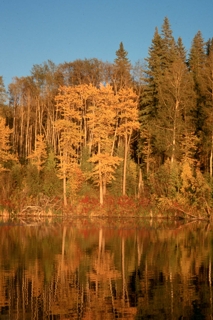 Here's the lowdown on what to expect

As September advances and the waters cool, look to trout coming shallower and shallower, especially at first and last light. I often break my code of getting up at the crack of noon and get up real early, at first light, well before the sun touches the sky. It's time to hunt trout. That is the best possible way I can describe it, as trout hunting. Get out on the water at first light, preferably in a boat of some sort and turn your attention to the shallows. I'm talking real shallow. As in, the trout's fin often sticks out of the water shallow. That's where big trout and lots of them will be quietly routing around. 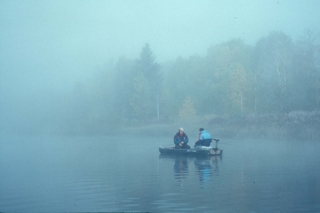 The water is usually flat calm and you can quietly work your way around the edges spotting trout after trout. Now there are all kinds of ways to catch them. If you're the fly fishing guy or gal, use a #5 weight rod, floating line and a super long leader. I'm talking a minimum 12-foot leader, a 15-foot leader is better if you can get a hold of it. On the end of that tie an additional five to eight feet of 4X tippet. Your fly should now be around twenty feet away from the flyline. This is necessary due to the shallow nature of the fishing and the spook factor of the trout. Any line overhead will send a trout darting for the cover of deeper water. 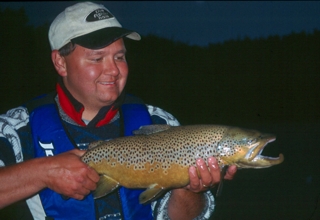 My fly choice is standard. I like to use either a size 10, 12 or 14 bead headed prince nymph, bead headed pheasant tail nymph or a zug bug. They all work and the reason is because trout are opportunistic. As long as whatever it is that plops down beside them resembles food, they'll come over and eat it. After you hook them, the rest is up to you. 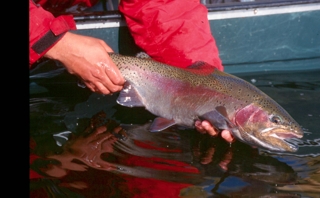 On the flipside, if you're the spinning type, which I am too, pull out some small floating plugs or toss some tiny spoons. For the floating plugs, Rapala # 5 Floaters in pretty much any pattern will do the trick, but if you made me spill the beans on my favorite, it's the #5 floating Rainbow Rapala. That plug has never let me down. On the spoon side, get a narrow one and a wider one and make them small. The Fiord spoon is an excellent narrow spoon choice and the various Len Thompson spoons are an excellent wider spoon choice. Again, just be sure they're small.

With the plugs, when you spot a fish, approach cautiously and pitch the plug about five feet to the side. Don't worry about reeling, because it's a floater, so it's OK to just let it set there. After it has settled, give it a few twitches to get the fish's attention. That otta do it. From there you're sure to see a big bow wake move towards the plug and slurp it down. Don't set the hook on sight, rather, on feel. Reel up until you feel the weight of the fish, then set the hook. If you're like me, that is much harder said than done, but believe me, doing it this way results in many more hook ups.

For the spoon, the trick is keeping it up. In the shallow water it's an art form. Cast, then as the cast is nearing completion, flip the bail so the moment the spoon hits the water, you're reeling. It's a timing thing and it takes a little practice, but when you've got the hang of it, fishing in six inches or a foot of water will be old hat. The smacks on a spoon are going to be hard so be prepared. The reason for this is simple, the spoon's moving, the fish's moving and when they collide, the strike is solid. 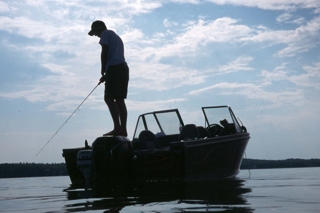 Just be sure to set the drag. A lot of these shallow water fish are bruisers and there have been days when all I could catch were three to five pounders all day long. It's a crazy thing, but that's the beauty and the bounty of the fall season. Lots of fish and lots of fun. 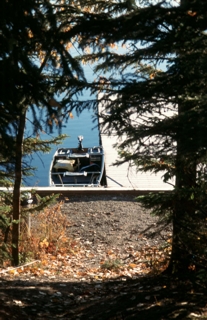