Think about salmon for a moment and consider their epic journey to the ocean and back. Fueled by their instinctive need to spawn, they travel thousands of miles only to return to the very stream of their birth, to reproduce and propagate the species. Scale this down a touch and think about walleye now. Notice how they too migrate from their home lakes to inflowing or outflowing streams in the spring to reproduce. The same can be said for brook trout in the fall or rainbows in the spring. A fish's will to reproduce drives them to this end.

Anglers in the know often time their fishing efforts to correspond to these mass migrations and it's easy to see why. With concentrated numbers of mature adult fish all coming together, it can make for some pretty great fishing. All those anglers chasing the huge summer salmon runs up and down the BC coast are essentially targeting migrating salmon that have schooled together and are on their journey back to spawn. The same can be said on a smaller scale for other species like walleye. Take renowned Lesser Slave Lake, which has something like 80 percent of its entire walleye population spawning in the Heart River on the lake's extreme western end each spring.

Every opening season there will be dozens upon dozens, if not hundreds upon hundreds of boats in and around Shaw's point to get in on the fabulous walleye fishing. The reason for this is simple. Hilliard's Bay and the area around Shaw's Point is the first stop for all walleye flooding out of the Heart River right after the spawn. The area will be alive with fish and the hardest part about catching them will be to simply get a jig and minnow to the bottom - the fish take care of the rest. 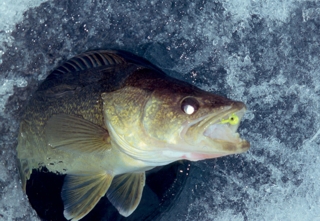 For the coming ice fishing season, the brook trout will be spawning the moment you read this. And if you have a brook trout lake near you, the best time to fish it is now and the best place to fish it is near shore wherever you can find graveled areas. This is a brook trout's preferred spawning site. The same can be said about the brown trout, which too are fall spawners and the cool thing about browns, is that they're often stocked in lakes in conjunction with rainbows. The rainbows know all about the spawn and they will follow the browns in so where I find spawning browns, I usually find good populations of opportunistic rainbows nearby. Using eggs suspended near bottom on a small snell hook has caught me loads of trout.

Planning ahead, look to last ice to cash in on some amazing action centered around three spawns and four fish. The first and most important fish is, of all things, the burbot. Burbot usually spawn under the March ice and where there are spawning burbot, there are opportunistic whitefish moving in to eat the spawn and opportunistic pike moving in to eat the whites and the burbot. Set out a tip up with a massive herring and leave it alone. It will pick off the odd pike and these fish will be big. Five to twelve pounds is about average and twenties happen every year. Besides the tip up, the rest is a personal choice. I sometimes put down small wireworms to catch the whites, or sometimes I'll drop a big jig and minnow to catch the burbot themselves. It all adds up to some pretty fantastic fishing at last ice. 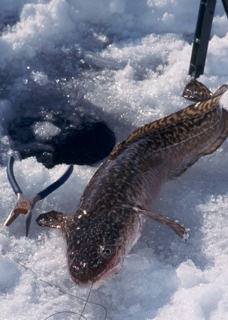 After the burbot spawn, look to the obvious migration routes walleye and pike will take as they too get ready to spawn at last ice. Usually a prominent stream or river will serve as a spawning site and the pike and walleye will start staging on the perimeter of these areas prior to their own spawning run.

Knowing these areas and concentrating my fishing efforts near these stream or river mouths has put me into some amazing fishing. What I do is first find the targeted stream. From there I'll look around and find the closest flat or point, or perhaps and entrance to a bay and then I start my search around there. I drill a pattern of holes and let the fish tell me what they want and where and it usually doesn't take too long to find some willing customers. Just a word of caution, any fishing done anywhere near flowing water must be done with respect because of the potential for unsafe ice conditions. Be sure and be safe before you fish. 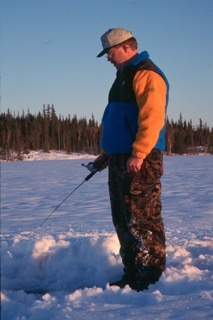 This coming winter think about the fish you want to catch and figure out if they too migrate because of their spawn. If they do, figure out a strategic place to intercept them and cash in on some amazing fishing. 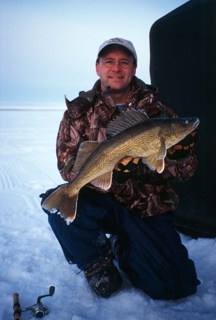 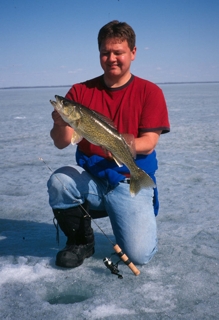