We set up on Lake Isle over a known feeding flat, punching holes everywhere from four feet to 15. 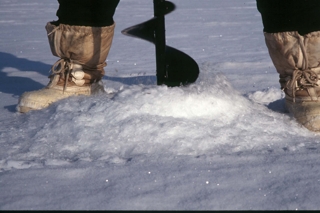 The approach was simple: the fish were going to come up in the evening and we were going to be there to meet them. Our target was the ever popular walleye. With the task of drilling done and the sun still high, we moved out over deeper water and hunted perch to quench our angling thirst. As the sun dipped low on the horizon it was time to make our move. 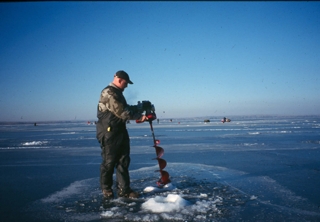 We trekked back to our pre drilled holes and commenced fishing. Using spoons and jigs tipped with minnows, we probed the deeper holes first and sure enough, walleye started to bite immediately.

Given that our holes were pre drilled, there were no outside disturbances for our entire fishing time. All we had to do was hop holes and move with the fish. As the evening started, the walleye bite was best to the deeper side of our pattern, but as the sun scratched the horizon, we found lots of them up in our shallowest holes. The bite was fast and over the span of and hour or more bent rods were the norm. The fishing lived up to the anticipation and with the sun down and darkness upon us, we packed up and headed home.

Fish migrate. We talked about seasonal migrations last month, but even daily fish migrate, and the act of migrating is not random. Fish move from their deeper water daytime hangouts to their shallow water feeding grounds in a predictable way. This movement is done with purpose and the fish will use the natural contours of a lake to guide their approach. Natural counters could be a weed line or an underwater bay along a drop off also known as an inside turn. As an example of an inside turn, imagine a creek bed cutting an extended underwater channel into a lake. That is one example. As another example, think of a drop off that follows the shoreline for a spell, then juts straight out into the lake at a right angle. That too forms an inside turn. Inside turns naturally funnel fish and finding one and fishing it is a guarantee that more fish will be passing by the hook. 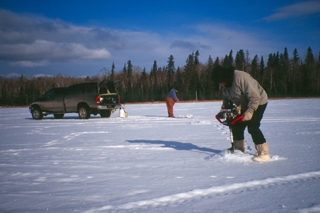 Knowing this small bit of information helps me plan were and how I fish within the day. If it's bright out, it's time to fish deeper and slower. The reason, fish are usually less active during the bright of day and will hunker down out deeper.

When it comes to species, it doesn't matter if I'm fishing rainbows, whitefish, walleye or pike; if it's sunny the approach will be deep and slow. Because we're allowed to fish two lines in Alberta, I'll jig with one line, keeping the jigging action on the slow side and I'll put out a set line off the other. When it comes to using set lines for trout, pike and walleye, I'll suspend bait near bottom. Worms for trout, minnows for the pike and walleye. But when it comes to whites, I've never had reliable luck with bait, as surprising as that may seem, so I resort to suspending flies. 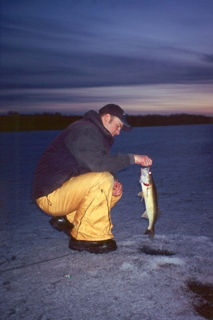 Now fishing deep is a relative thing and often the deep I refer to when ice fishing is only 10 or 12 feet. For most of my daytime fishing efforts, I place a set line on the deepest edge of an underwater weedline and then walk away. This approach is ultra quiet and will guarantee exposure to the occasional cruising fish that will undoubtedly pass by. 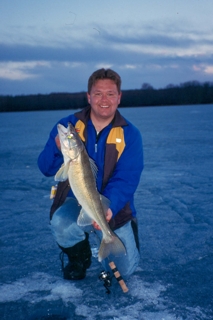 As evening approaches, I give up my deep-water haunts and move shallower. Fish move shallow in low light to feed so that's where I set up to catch them. 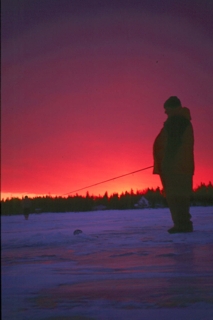 Beforehand, I drill enough holes to give me full coverage of the area. If I know the area well and it's one of my 'go to' spots, I may only need to drill a dozen holes, but if it's a new area and I'm unfamiliar with it, I may drill twenty or thirty holes to get the job done. It's then a matter of letting the area rest until the evening bite approaches. At some point in the evening, for a spell of anywhere between ten minutes to a couple hours, the bite will pick up and be as good as it gets. For this reason I run and gun. I'll fish a hole for up to ten minutes and then move on, trying to find active fish. 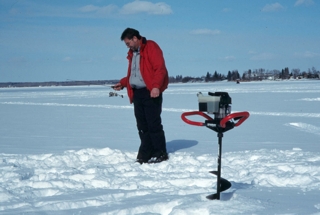 When the bite happens, I fish a hole until it cools and when it does, I move shallower, because that's where the fish will most likely be. Following the fish throughout their daily migration has served me well and I'm sure it has connected me with a lot of fish. 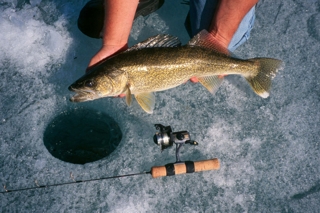