Circle at least a couple of the weekends in the month of March and make plans with your friends to head out to your favorite lakes for some good ice fishing. All lakes at this time of year will be fishing well and it is at this time of year that I set aside a couple of days to head out walleye fishing. This past weekend I did just that and went to Pigeon Lake with my friend Bob. Pigeon Lake happens to be one of several lakes I go to when I think of walleye, but the good fishing for walleye holds true at most every lake come last ice. 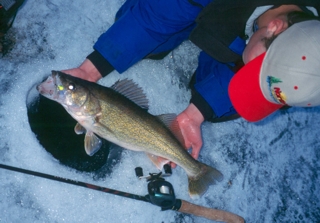 February 26th, Bob and I picked the very windiest, coldest day to take the drive out to Pigeon Lake and go fish. Pigeon has captured my interest, for Alberta's Fish and Wildlife department will launch a new type of fishing regulation. This lake will be one of several to be governed by some form of a draw-based fishing system. To retain a walleye anglers will need to make application for and subsequent purchase of a tag to keep a walleye. It will be interesting to see what happens. I am certain, however, that with the availability to keep a walleye this body of water will receive much more attention.

The new regs aside, we were going to Pigeon to get a jump-start on perhaps the best ice fishing of the season. Typically, the month of March is pure gold with fish of all species out feeding and up and about. The bite goes from sporadic to good to strong and can last throughout the day. Such was the case on our trip. 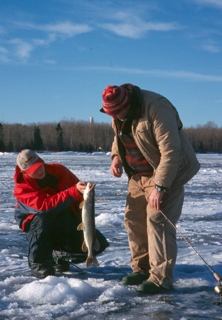 In the early morning light we set up shop and I got to put an extremely valuable tool to work. The drop is 500 to 800 meters off shore and it is hard to find just driving around in the snow. So when we got somewhere close, I pulled out the Polar Vision, which tells water depth through the ice, there is no drilling required. Out on the lake I put a little water to the ice, placed the Polar Vision on it and hit the on button. It flashed 8.7 feet. I moved out and continued to do this with the depth progressing to 10 feet over the next hundred meters. But after it hit 10 feet, it rapidly dropped through to 14 feet, in one short move and continued deeper to 19 feet. That's when we pulled out the auger, drilled our holes and set up shop. 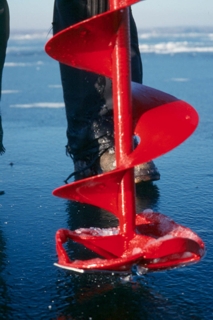 Rather than report on all of our trials and error for the day I'll go straight to good stuff. We found the fish stacked in 16.6 to 17.5 feet and we were getting hit steady all day long. In the morning a larger minnow on a quarter ounce jig was the ticket, but as the day progressed, the bite got softer. 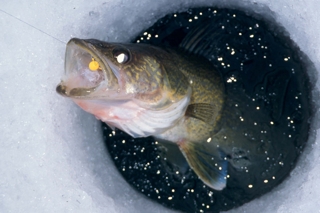 We were still getting hit, but more fish were dropping the bait. To get around this we moved to lighter jigs, which helped, as more fish were able to suck in the minnow and lighter jig. But then Bob pulled out an innovative all finesse rig that was truly impressive. It was nothing more than the slip bobber, but it worked like magic. On the end he had a single hook and up a foot or so was a split shot. He'd let the line down near the bottom prop the rod up and then do something I hadn't thought of. He'd leave the bail open. After that he'd clear the hole of ice every ten minutes or so, so the bobber wouldn't freeze in. The system was pure magic. Every fish that bit would hold on. The fish would pull the little bobber beneath the ice and with the bail open, the line would pay out with no resistance. This give Bob the time to get over, pick up the line, close the bail and catch the fish, which he did quite well. I'm happy to say I was a quick learner and converted over to the same system and started catching all of my bites. 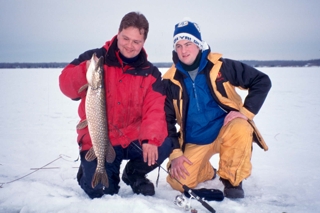 Throughout the day using some form of minnow, be it on jig or under a slip bobber, we caught plenty of walleye, a couple pike and a bonus whitefish. 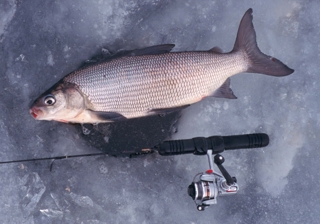 One of the pike and the whitefish made the trip home and provided the base of a very good supper the following night.

This type of fishing at Pigeon, however, is typical of the type of action you or I will encounter on pretty much any other representative walleye, pike and whitefish lake throughout the month of March. The fishing will be generally good and if you can cover a couple areas with a couple of presentations, there will be some catching going on. 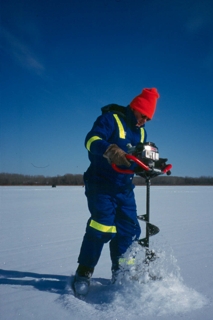