It's spring and with the warm sun in the air it's the perfect time to start planning some angling adventures. Of course there are plenty to choose from, but here are a few that I took this past year and had a load of fun.

The Northern BC Coast for Salmon and Halibut

This past summer my friend Arnold Carlin and I hooked up with Terry Weaver of Terry's Charters and set out on an adventure we had never done before. Terry is based out of Prince Rupert and offers three day, guided trips where you live right on the boat. He takes you northward to pretty much the Alaska/BC border where you fish all the hot spots in the area. 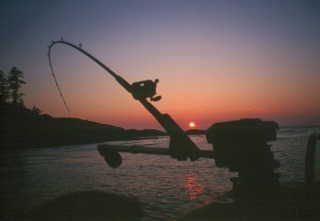 Because this trip takes you to an area that is further away than many can get to, it is lightly fished and the catching is great. His boat is a 40-foot aluminum called the Seal Cove that can sleep five comfortably. 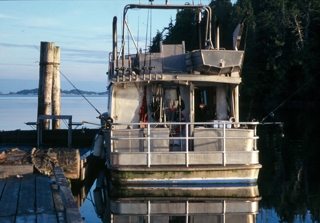 He also has larger and smaller boats available. The Seal Cove is big enough to go pretty well anywhere, yet maneuverable enough to get in tight to shore to pick up the biggest of the springs. Arnold and I hooked up with Terry towards the end of the season, in late August and caught more coho salmon than we could count. 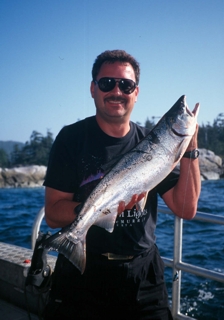 We also easily limited out on halibut, including a beauty that weighed in at 60 pounds.

As a bonus to the fishing we saw whales, beautiful sunsets and enjoyed watching the phosphorescence glow in the water. It was a wilderness trip of a different sort, where we covered some 140 miles by sea and moved about to all the good fishing holes.

It was a unique experience that allowed us to see a part of Canada we had never seen before, while at the same time we had a taste of the truly great fishing the northern BC coast has to offer. 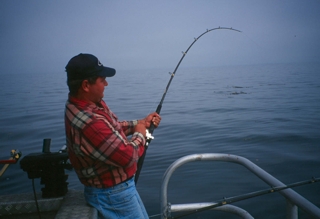 Anybody just itching to catch a world-class bull trout owes it to themselves to make the trip to Lower Kananaskis Lake in southwestern Alberta. Lower Kananaskis is a drive to destination and anybody that can float a boat will have a great shot at catching these mammoth char. On my first trip this past summer I hooked up with my friend Ayr Miller and together we took on the challenge of catching these magnificent bulls. It didn't take long to figure them out. 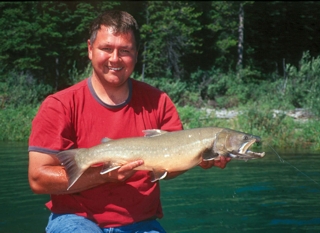 We found that dragging 1/8-ounce jigs slowly along bottom did the trick and the average bull trout came in at an impressive 24 to 30 inches. They were huge! 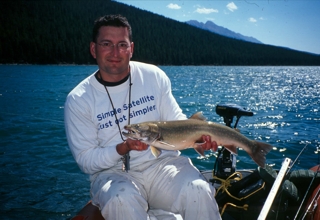 We were all smiles, but near the end of the day the Lower K sent us a twist. We met another angler coming in from the lake. He too had caught plenty of bull trout and actually called them a bit of a "nuisance" and then proceeded to show us what he was fishing for. On his stringer were two trout. One, a rainbow of about four pounds, the other a massive cutthroat over five. Talk about incredible fishing. Ayr and I will definitely be going back. Mountains surround this lake, the scenery is stunning and the fishing is equal to the surroundings. It is definitely trip worth checking out. 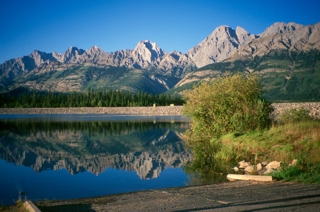 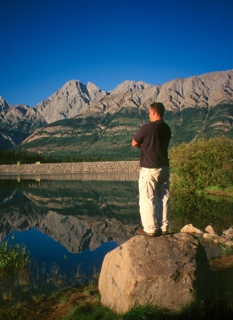 The Big Lakers of Cold Lake

The secret is getting just getting there. The fishing is great at Cold Lake, which is located on the Alberta/ Saskatchewan border. For the past couple years I had been promising myself that I would make the trip and this winter I made good on that promise. My goal was to find out if the rumors that the lakers average 12 to 15 pounds were true. Towards the end of March, Ayr and I hooked up with Bruce and went out ice fishing for the day. One trip is all we needed. This place is going to become a regular visit in the years to come. While the bite was off, we saw plenty of fish on the electronics and managed to hook six trout, bringing three to the surface. One was smaller and we released it, but the other two were nine and 12 pounds respectively. 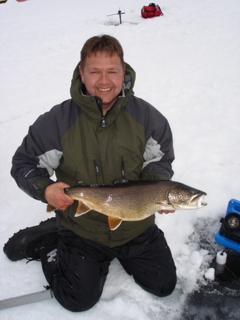 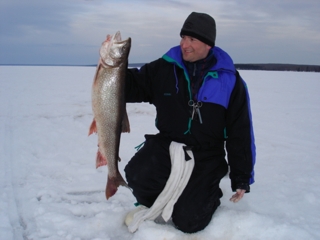 Bruce said that it was a slow day and the fish were actually smaller than average. Talk about saucer eyes. We were amazed. Besides excellent laker fishing, there are plenty of pike to catch and the walleye fishing is good even though at this point it has hardly been explored.

These are three great trips and I'll be going back to each one of them to have another go this summer. Regardless of whether you check any of these places out, have fun planning your own trips and enjoy the great days of summer fishing ahead. 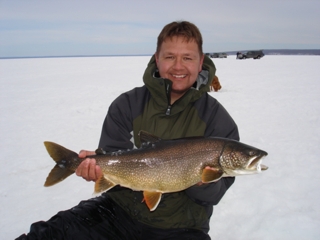 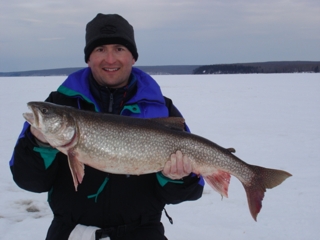