It all started at the Outdoor Show and Sale put on by the Fishin' Hole and Campers Village this past March. I was walking by the Davin Lake Lodge booth and got to talking with Irvin and Diana, the lodge owners. They had pictures of larger than life Northerns, stories of plentiful Lakers and tastier than tasty Walleye. The map said Saskatchewan and the little squiggly line said that it was accessible by car. The price was more than reasonable and there was a yearning inside of me that said I needed a Saskatchewan break. I had to go. The best thing was that my buddy Arnold Carlin was struck by those same symptoms so we signed up and made plans. Our trip was booked for June 21 - 24 and we couldn't be happier. 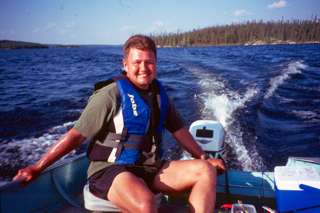 Surprisingly, June 20th came quickly and before I knew it we were heading east in Arnold's car with our gear in tow. The trip took us through the prairies, north to Prince Albert, past Waskesiu in Prince Albert National Park (famous for its Big Olaf ice cream cones and the home of Grey Owl), and then on to La Ronge. La Ronge is the start of Shield country and from there we continued north on a winding gravel road passing lake after lake and stream after stream. Every one beckoning us to fish. The temptation to stop and wet a line was great, but with Davin Lake on the horizon, we kept the wheels a turning.

Under a clearing sky we reached Davin Lake and made our way to the lakeshore where we met up with Irvin and Diana. We asked about the fishing and it had been good. The group ahead of us had done very well with three of the anglers catching a pike in excess of 40 inches, including one beast 44 inches in length. Irvin stressed the camp's desire to maintain this quality fishery. He actively promoted catch and release of larger fish, while allowing the harvest of the plentiful smaller fish. "We have this beautiful lake with amazing fishing," he says, "and we have an opportunity to maintain it, which is why we ask guests to release the larger fish." It was great to see Irvin take an active role in being a steward and conservationist for the lake. 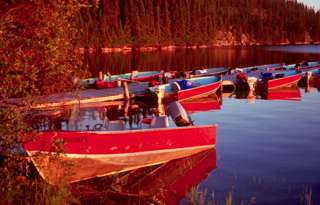 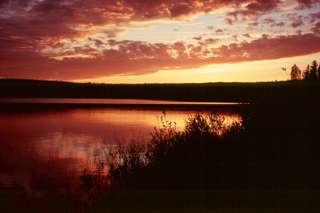 Soon the sun hung low on the horizon, the dockside boats were awash in a beautiful evening glow. We snapped a couple of photos to capture the moment and headed off to bed. Morning came quickly and it took no time to jump into our clothes, gobble down a delicious breakfast and hop in the boat. For this day, Irvin had one of his guides, Curtis take us out. We fired up the outboard and made our way to a flat just off five-mile island. 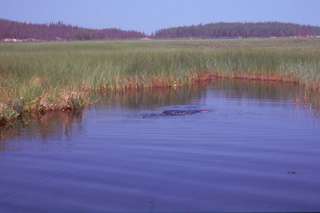 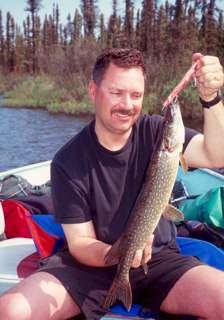 The flat rises to about fifty feet and is a known lake trout hot spot. Curtis had us drop down buzz bombs and jig them vertically. In short order my rod doubled over, then Arnold's. We were bringing up laker after laker and it really put an exclamation point on the great fishing Davin has to offer. With our fill of laker fishing, he motored down the shore allowing us to cast buzz baits, jerk baits, plugs and spoons to a never ending supply of pike. We found pike everywhere and had a load of fun casting our Suicks and buzz baits. Both are top water lures that draw pike from below to explode at the surface in a showery spray of water as they attack the baits. 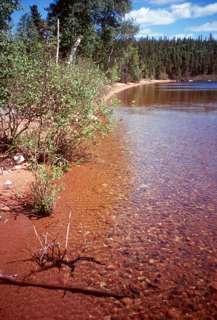 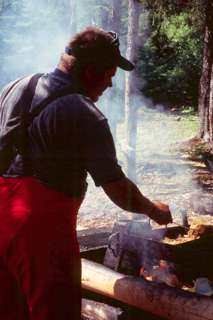 We kept two smaller pike for shore lunch and pulled the boat alongside a truly beautiful sandy shoreline. Over a bed of hot coals, Curtis cooked up a delight of potatoes, onions, beans and freshly caught boneless pike fillets. It was a lunch of all lunches, perfect for that setting and as delicious as it comes. After shore lunch we were back in the boat casting and jigging. Regardless, whether it was a pike or a lake trout, the fishing was great. After a full day of fantastic fishing we returned to the lodge and recounted our stories to Irvin who was eager to hear about our adventure and our successes. 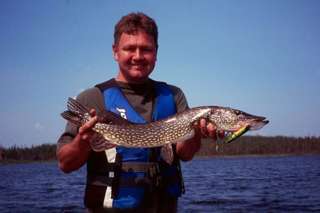 Rory, the lodge's other guide gave us a map to the lake, which highlighted the best spots. Armed with that we were set loose to explore and fish on our own schedule. Curtis and Rory came out on the water in their own boats and provided tips and showed us and other guests some of the better areas to fish and what to use. On our outings we caught more lakers than we could count. It honestly never took more than ten minutes to hook up. The pike fishing was terrific with a ton of shallow water fish providing some amazing top water action and just for good measure we caught a walleye while casting plugs for pike. We had booked a four day stay in this North Saskatchewan paradise and we came to realize that four days only allowed us to scratch the surface. There were so many places to explore and discover. Davin is a large lake stretching more than ten miles long, has two big main basins with arms, bays and islands going off in every direction. It's no wonder we simply couldn't get to it all, but we definitely gave it our best shot. 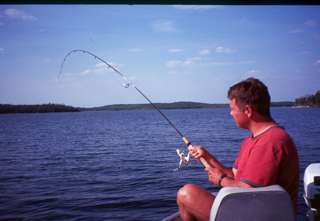 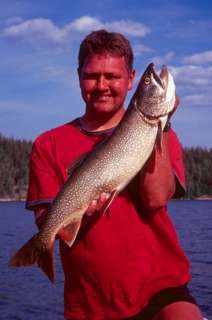 At the end of each day our catch was filleted, packaged and labeled for the trip home. The boats were cleaned up, fueled up and ready to go for the following morning. Back at the lodge a home cooked meal awaited. After dinner it was a great time to walk out on the dock, watch the sunset, drink in the peacefulness of the moment and then retire to the gathering around the communal campfire. Stories were told, friends were made and sleep came easy. Oh why does life have to be any more complicated than this&?