Fishing Among Giants-Pursuing Lake Sturgeon on the Prairies

It was a cool, late August morning and first light brought shape and definition to the surrounding landscape. My rod did the tell tale yo' yo' bob. My heart skipped a beat. I grabbed the rod and felt the fish rolling the bait on the other end. The rod bobbed in my hand, but experience told me it was not the time. It took everything in me, but I waited for what seemed like an eternity. This cat and mouse game played itself out as the rod finally powered down in one deep, straining pull. The time was now and I set the hook with all my might, only to meet a resistance that didn't even budge.

The fish, likely not realizing anything was up, merely continued to slowly swim upstream as my reel relentlessly gave up line. There was nothing more I could do. This went on for several minutes. I levered all the pressure I could and eventually it came around. Perhaps not because I was forcing its hand, but rather to check out what was becoming a nuisance. As I worked, pumping and pulling, I succeeded in bringing the fish shallower, but not for long. The sturgeon, having seen enough of the shallows and obviously annoyed by my line, did something that remains as vivid in my mind today as it did on the day it happened. As my line cut a path straight to the surface this pre-historic beast launched itself out of the water in a spectacular display of speed and strength. It seemed to hang in the air for an eternity before landing on its side with a huge splash that echoed off the far bank of the river. I took a big gulp of air, leaned back into the rod and set into a renewed offense as I waded out into the water to meet it. The rod was strained to the breaking point as I continued to pull but the sturgeon relentlessly swam by doing big circles in the river. I thought it might be tiring and my friends, Chris and Curtis came out to help. Curtis managed to get a hand on it and eventually brought it under control. There he was, holding the biggest fish I had ever hooked in Alberta waters. It was a lake sturgeon and it was big, beautiful and gave me a fight that was everything I could handle. On the tape she measured fifty-four and a half inches. As I sunk into the water to cradle her, I couldn't help but think this big fish might be older than me. I let her rest, cradled by my arms in the water, for a minute or two. In this quiet time all I remember is her gills pumping and then with a little struggle she slid from my hands, slowly making her way back to the deep. I watched until she disappeared from sight. 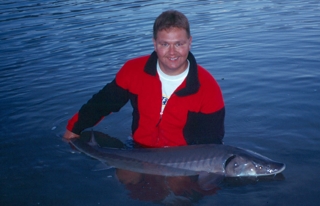 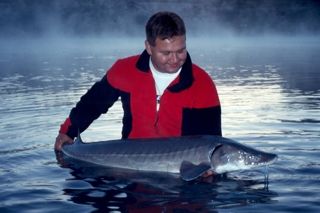 I let out a joyous whoop and did a happy dance. It had been my third chance at a sturgeon that night/day, but the first one I landed. The first one succeeded in bending my hook out straight and the second had got wrapped up in a snag and broke the line. Chris and Curtis on the other hand, had landed five sturgeon through the course of the day. It was an amazing outing and opened my eyes to the incredible sport this game fish has to offer determined anglers. The good news is that many of our prairie rivers provide a home for lake sturgeon and enjoying the challenge of landing one is only a cast away. 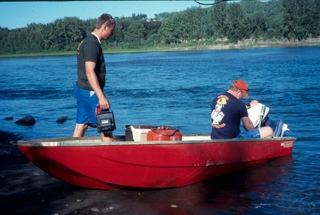 During the summer months sturgeon will roam throughout the rivers but normally in August they begin a migration to deeper pools. As the water begins to cool, they instinctively know that its time to get ready for the coming months of winter. The North Saskatchewan River that runs through Edmonton is a good example of ideal water for these fish. 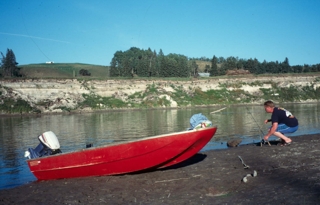 The holes may be miles apart and run anywhere from 12 to 20 plus feet deep. They may vary from the size of a hockey rink to dimensions larger than a football field. These spots will see increasing populations of sturgeon as the fall progresses and fortunately I do know several of these locations on the river. If you are not familiar with a particular body of water that holds sturgeon look for these deeper pools and spend some time observing the action on the surface. Sturgeon have a reputation for breaching and the resounding splash as they re-enter the river will be an unmistakable clue to their existence. It may also be a little unnerving for the rookie angler making it somewhat difficult to muster the steady hands needed to tie the knots as you rig up for the challenge. 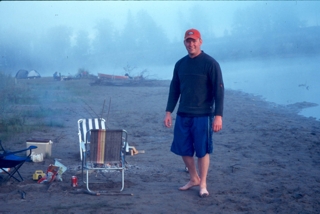 I recommend using a minimum of12 pound test and a heavy weight to anchor the bait to the bottom. Use quality hooks, thread on two large dew worms, toss the rig into the deep part of the pool and wait. If you have chosen the right spot, chances are excellent that eventually your rod will start bobbing. Hold your breath and hang on; the fun is about to begin. 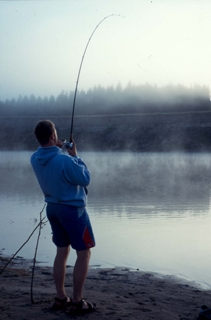