"It's happening right now," said Al Hunter of Miller Lake just west of Edson after I made a pit stop in Edson to check on the local fishing. He added, "For whatever reason the backswimmers are coming in and they're two weeks early. The best time to be fishing them is between 1:00 to 4:00 PM and after that the action drops off dramatically." I was excited. "What about the browns that were recently introduced into the lake?" I asked, knowing that this could be a big bonus for what was already a quality fishery. "The guys are catching them, but working in extremely shallow water to find them." That was a situation I'd experienced myself, having hunted browns this way in East Dollar and Figure Eight Lakes. 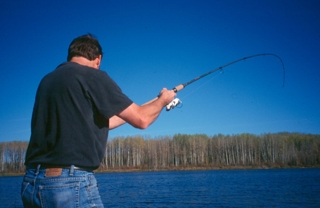 Not all of us are fly guys or gals and that's fine. I fish the spinning rod with incredible success using the same backswimmers and attaching a splitshot a few feet up the line to provide weight for casting. If I want to keep the fly along the surface, I'll put on a small bobber and suspend the fly below. 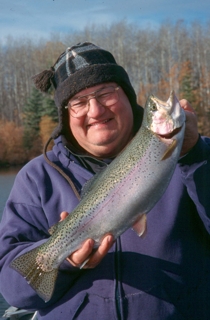 Backswimmers are migrating at this time of year flying from smaller puddles and ponds to the lakes to overwinter. When they spot a lake they literally dive bomb into it making a splat as they hit the water. After impact, the backswimmer begins kicking using its two large legs to get it to the bottom as fast as possible. Somehow they seem to instinctively know that if they don't they will end up as trout food. What we have to do is imitate the splat, then reel or strip line while imparting fast twitches on the fly to imitate this kicking motion. Once we've got that down the trout will do the rest. 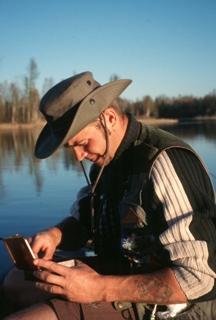 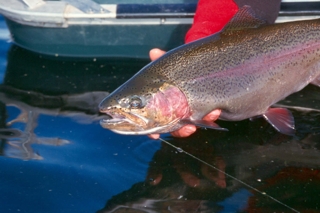 The strike, however, is something you must prepare you for, as it may be so hard that it breaks the line right at the set. The reason for this is that backswimmer is moving fast to get away from the trout and the trout is moving even faster to catch it. When the fly hits the water with a splat, like a backswimmer, often times the trout will bolt at the fly and literally smash it. That combined with a hard hookset will break lines. I usually break the first fish or two off (even if they're 16 inchers) until I tone down the hookset and then I'm off to the races. 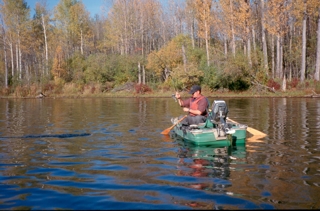 Last September I was at Millers enjoying this very event and having the time of my life. I had caught probably 40 or more trout in the afternoon and had kept a couple for dinner. I observed several fish rising, or I should say slashing at backswimmers near a big weed bed. I figured I'd risk some tackle and cast right up tight to see if I could get one to take a poke. The first fish I cast to ate it. Before I even had a chance to tighten the line, it accelerated through the first clump of weeds, exploded into the air where I got to see all seven to eight pounds of him. He then crashed back down, snapping my line in the process. An awe-inspiring process that took all of about two to three seconds from start to finish.

This is the backswimmer event that all flyfishermen and women look forward to each fall. It's responsible for getting the biggest of the trout to the surface and the action is fast and furious. The strikes are hard and the numbers add up in a hurry. The great thing about this event is that when you're on backswimmers and the fish are biting, you will feel like a fly fishing guru and, for a spell you will be. So if you get the opportunity, try it, it's a whole lot of fun.