The Shallow Water Hunt is On 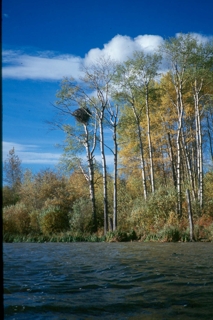 The seasons are changing and the shallow water hunt is on. I heard evidence of it happening from my buddy Ross Stout. He called to let me know that this past week he was trolling for walleye at Pigeon Lake and landed a 15-pound pike. Hmmm! That got me thinking; tonight I want to see for myself. I hopped in the car and headed west with Damien and my three-year-old daughter Angela. We were off to Star Lake on a hunting trip. Not for big game as you might think. We were hunting for trout. 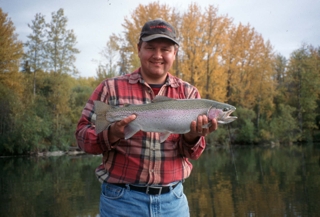 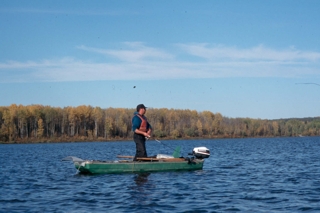 Hunting rainbows is very different from fishing rainbows and the fall is just the right time to do it. At this time of year you will find them all day long but more in the evenings and mornings. They will be hunting and feeding in water so shallow, even the electric motor can't get in. I'm talking about fishing in water six inches deep to no more than three feet max. These shallows are full of life and now that the water has cooled, the temperature is just to the trout's liking and they are in there feeding like crazy.

Tonight our happy trio jumped in the boat and headed to the shallow bay across from the boat launch. There we saw exactly what I had hoped to see. In the shallows the surface of the water was alive with feeding trout.

I cast out a bobber and bead head nymph to one of the first risers and immediately connected. I held the rod while Angela reeled in a scrappy trout. We moved in tighter and were now routinely casting in a foot or two of water. The bobber and bead head were now the wrong tool for the job. These trout were aggressive and I needed a shallow water presentation. I dug into my little tackle box and pulled out the only plug I had brought with me. A #5 floating, brown trout Rapala. I tied it on and waited and watched. Soon a trout moved close to me. I shot the plug out and in no time a wake was bearing down on it. The wake stopped; I felt a sharp tap and a rainbow rocketed skyward. I fought the trout in and grinned, knowing this was going to be a good night.

We continued to move about the shallows targeting individual trout. Both Damien and I got hits but we couldn't seem to stick them. Just then a large snout appeared to my left, about twenty feet away. A flick of my wrist and the plug was on its way landing right where the snout had come up. Within seconds a swirl and a bulge of water charged at the hook. It slashed at the plug, but did not hit. I gave it a couple more twitches and the trout turned and hammered it hard. I set the hook but rather than jump the big rainbow slashed water side to side, making big, large audible sloshes. It shook its head and the rod pounded in my hands. I held on as a determined tug-o-war ensued. After several minutes of steady pressure the trout wore down and we scooped up a beautiful rainbow of better than twenty inches. "You got the daddy fish!" Angela said. 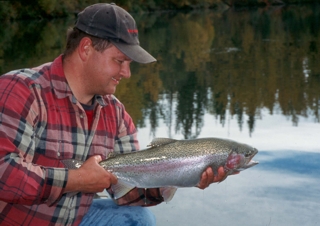 Along the shore the trout continued to 'shark' about, but the sun was down and fishing didn't seem so important. I had found the answer to my question. For a spell I listened to the geese and breathed the fresh autumn air. Damien gave us each a chocolate bar, straight from the UK and Angela and I scarffed them down. It was a great day. 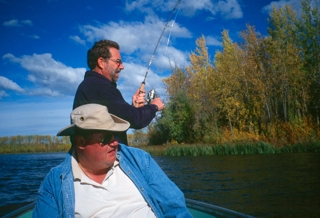 For the month of October look to the shallows for great fishing. While I spoke of trout, another gamefish that loves the shallows come fall is our submarine sized pike. Big pike are different than the small ones. The small pike have a tolerance for warmer water, which explains why we catch them in the weedy shallows all summer long. Big pike, however, don't like warm temperatures and to beat the heat in the summer months they go deep. Come fall the water cools and they push right up shallow to hunt for their favorite food, lake whitefish. Anyone who has fished pike in the fall knows the rest of the story. Fish shallow, concentrate on the remaining healthy weedbeds and hold on. In these glorious days before freeze up pike of six to twelve pounds will seem to be everywhere and as an added bonus every now and then something really big will come along and make your day.

It's fall and it's time to go hunting. Hunting for those shallow water pike and trout that is. Have fun.