If ever there's a time to get on the ice for some great fishing, this has to be it. The burbot event, as I like to call it, is starting. I was at South Buck, a newly discovered favorite lake catching all kinds of pike by day and walleye by night. The fish were biting strong right into the night and then "bump". I had hooked a heavy, heavy fish that didn't run, but pulled real hard. Burbot have a habit of doing that. 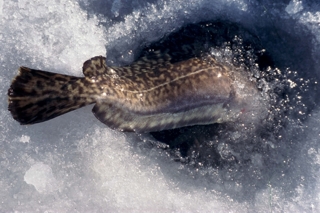 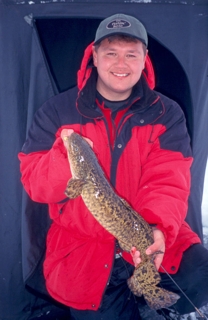 In a minute or so I got him up. He was a large seven to eight-pound burbot, complete with spots from head to tail. Seeing my old friend, the leopard fish was a most welcomed sign. It's the indication that the burbot spawn is starting and over the next few weeks burbot, big and small, will be flooding the shallows looking for partners to do their spawning ritual. Now with a proliferation of burbot invading the shallows depositing their eggs there will be legions of whitefish following them in for those tasty little burbot treats. 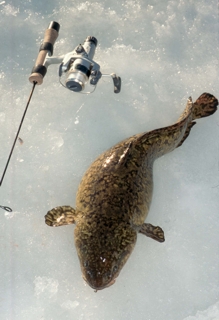 So now a condition sets up where there are love struck burbot along with happy, fat and extremely well fed whitefish dancing around the shallows doing their thing. Well, it's not long after this that huge and I mean the largest of the large northern pike move in. They come shallow for one reason. Their favorite foods are in season and on the menu. 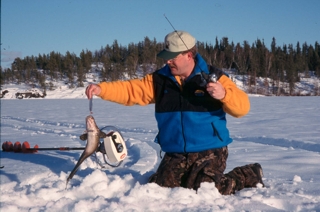 These pike eat fish and that's all their looking for. To catch them, I give them what they want, a big fish. I'll go to the Fishin' Hole and purchase the largest of the large herring. I'll stick it on a tip up and drop it down so it's just a few inches above bottom a good 50 to 70 feet away from where I'll do most of my active fishing, Once it's set, I'll walk away and there's a very good reason for this.

Big pike are sensitive to sound and outside disturbances such as people walking overhead on the ice really bugs them. That's why I set the tip ups off to the side. This gives these big fish have all the time they want to look over the bait and make a decision to attack. 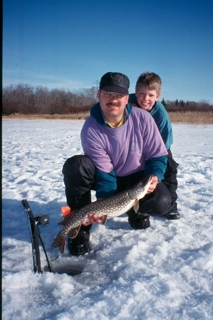 When the flag springs to life, it's time to get on my horse and run as fast as I can. When the burbot are in full spawning mode the pike fishing can be frantic. On any given afternoon I can pick up a half dozen or more bites. While this doesn't seem like a lot of action, consider the size. These fish average 7 - 15 pounds and there's a very real shot at a twenty. My best pike through the ice came during the burbot spawn and measured 42 and a half inches.

We're allowed two lines while ice fishing so I'll drop a tip up down one hole and jig in another. To catch burbot, pike and walleye, I'll tip a three eighth ounce jig with a minnow and jig from hole to hole making sure to bump my the bottom. The burbot respond to this action and I'll often catch more than a dozen burbot per outing. The bonus is usually a pike or walleye while using this rig. If you really want to catch a bunch of burbot, hang around into the night. Their activity peaks after the sun sets and I've had evenings where Id drop a glow jig down and get hammered all night long, never having to count beyond ten to catch a fish. 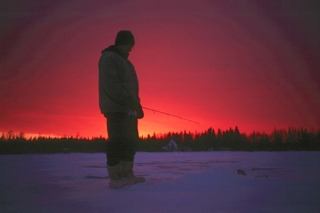 Beyond burbot, I'll bring my whitefish gear and key in on the aggressive whites. I like to use wireworms, but instead of the traditional set ups, I'll use wireworms that have beads representing eggs. These hooks seem to get a lot more action. I'll bring it up and let the hook slowly drift right onto the bottom where I'll let it rest for several seconds. If nothing comes by, I'll raise the hook back up and do it again. I suspect the beads on the hook imitate eggs drifting to the bottom. This system works real well and I've come to expect most bites as the hook is lying in the sand.

When the burbot spawn is over the fishing is done. Shallow sandy, gravelly flats that held all kinds of fish one weekend will become a veritable desert the next. There are no fish to be found. When this happens, the burbot bonanza is over. Take the cue and move back out to the weedlines to pick off whites and pike. Just be thankful for the great fishing that was. While the burbot are spawning, the fishing is fun, frantic and there'll be a whole lot of catching going on.