The May long weekend just passed and by all accounts the walleye season is off and running. A group of friends just came back from Calling Lake with fantastic success, landing around 20 walleye, plus a dozen pike. My friend Arnold Carlin was finding walleye off the shores of Lac St. Anne and they were hitting just about anything. My buddy Ross Stout was casting a line off shore at Pigeon Lake and couldn’t keep them off. His trick was to slow drag a jig with a white curly tail right on bottom. He said they were smacking it nearly every cast, especially when he let the jig settle and pause. 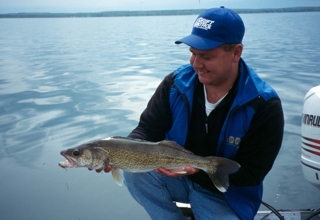 The one constant over the coming weeks will be dramatically improved walleye catching throughout the month of June. As the water becomes warmer and the walleye return from their spawn, their metabolism will kick into high gear, promoting an all out feeding frenzy. I’ve spent many a June day at Slave Lake and it never took more than lowering a jig and a minnow to the bottom to get the bite. The schools of walleye have been so thick at times, that I could literally anchor in one spot for as long as I wanted and catch fish every time I lowered my hook.

When it comes to catching June walleye I’m aggressive. I’ll pull out a bottom bouncer and spinner rig and attach a frozen minnow to the end. I’ll troll this rig all over looking for aggressive post spawn walleye. I like to start fishing any place I believe would be close to walleye spawning grounds. For Slave, Hilliard’s Bay comes to mind. This is the first basin the walleye run into on their return from the Heart River where up to 80 percent of all the lake’s walleye spawn. 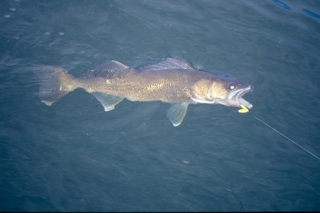 With the area stacked with post spawn, hungry walleye, it usually doesn’t take much to entice a strike. If I find, however, that the bite is slower than expected, I’ll slow things down. Perhaps a weather change has temporarily put the fish off their feed. Surprisingly, slowing things down is a simple process. Arnold Carlin once showed me the power of a slow trolled jig. That day we put on one of those quarter ounce wobble head jigs, attached a black scented Berkley Power Tail and super slow trolled, dragging the jig along bottom until we got bit. The system worked amazingly well. In five minutes we had a three hook ups.

The last two hook ups were a double header and figuring there must be a lot of fish around so we tossed the anchor and had at it. Jigging those same jigs or casting and slowly dragging them on bottom was the ticket. Tipped with a frozen minnow the walleye couldn’t lay off of them and we did well. 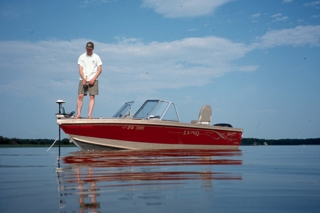 Sometimes though, I’ll get what I call the short strike. I’ll tie on a quarter ounce jig and tip it with a minnow. I’ll get a bite, set the hook and reel in only to find a minnow head attached to my jig. I’ll cast out and do the whole thing over again, that is, get the bite, set the hook, miss the fish and reel in a minnow head on my jig. When this is happening, the fish are light biting. To get around this I have taken to bringing out a supply of lighter jigs. I like to use the one eighth and one-sixteenth ounce jigs. I then put the lighter jig down and when I get the bite, the walleye will suck in the entire, including the hook and I’ll catch the fish. 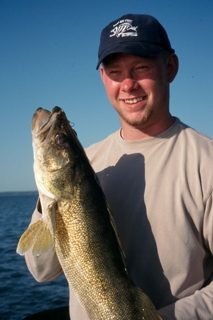 As the season progresses, though, the need for active presentations that cover water will become critically more important. There are a couple reasons for this. First, warm water prompts heavy aggressive feeding and second, as the walleye have long since returned to the lake from their spawn, they will continue to disperse throughout the waterbody. That means that walleye are widely disbursed, promoting the need to go hunt them out. Fortunately, the bottom bounce, spinner rig and minnow combo will fill this role perfectly and, if you’re into plugs, pulling diving plugs along bottom will yield surprising results.

A trick I’ve done over the years is to use my fly rod, sinking line and attach a small diving plug to the end of the leader. I’ll let out line until the plug reaches bottom, then I’ll reel up a few turns so I know the plug is running just above bottom. This I slow troll around the lake and it has lead to all kinds of fun. I’ve caught a lot of walleye and pike this way, and on the flyrod with a single action fly reel, it’s a great time.