The Big Ones Come out at Night

My favorite hole on the North Saskatchewan River never failed to produce and usually I could count on catching a few suckers and walleye for an afternoon’s effort. Over time I found myself staying later and later until I would keep right on fishing into the night, under the stars. There was some ambiant light from the glow of the city, but for all intents and purposes, it was night. Under that faint light I could just barely make out my bobber, but did manage to see a lot of bites. Through the night I caught a bunch more fish, most were walleye, but there was the odd pike and goldeye mixed in for flavor. 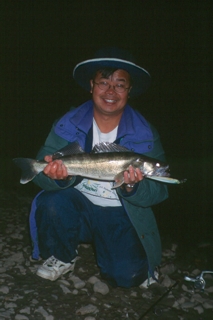 Then one night I did something out of character. I rigged a Rapala Husky Jerk on a steel leader. The reason was simple. I wanted to catch the pike I had just seen, but things didn’t quite work out as planned. In that late September evening one large walleye after another took turns pounding my husky jerk. I never did catch that pike, but over the course of an evening I’m sure I hit four walleye over five pounds and one that went nine. Needless to say I liked it.

So, with the success I had catching large fish by light of the moon, I took the show on the road and headed to a little lake called Figure Eight. The one and only reason I went there was to catch a big brown and I planned on fishing for them in whichever way I could. Throughout the day they were noticeably absent, but as the sun teed off on the treetops and shadows lengthened, I switched over to plugs and started hammering the shores. As twilight faded into dark, heavy swirls and sloshes materialized into one hawg-sized brown after another. 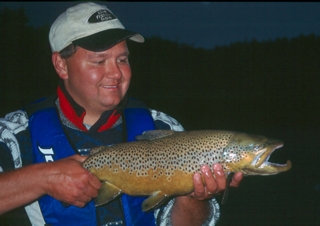 Then when making one fateful cast, my lure was crushed. I strained on the hookset and the fish did not move. It was big. “Oh my god!” escaped my lips and I put as much pressure as I dare on the big trout. It moved, but did not shake, not even a little. This was the tip off that I either had a beaver by the tail or a real big trout. I worked the fish and as the minutes wore on my imagination played all kinds of games with me, wondering what beast was on the end of my line.

I worked it close and saw the dorsal break the surface and way back from there, the tail poked out. This was a beast of a brown. I curled my tongue and said every prayer known to man and woman. The little hooks of my plug somehow held in this fish’s oversized jaw and fifteen minutes after it all started I wrapped my hand around a massively thick brown that measured somewhere between 28 and 30 inches. My good friend Arnold took one photo of this beast and I have the print at home. It remains my biggest brown to date.

That weekend was a weekend to remember. We caught lots of big browns, and all the action happened as the sun went low, then disappeared. In the dark these fish were hunters and delivering a big plug to them was exactly what they were looking for. 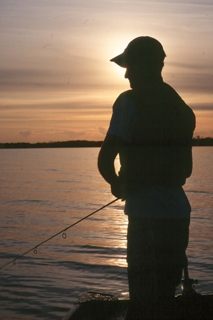 This exact same scenario will be playing itself out this fall at most every pike lake near and far. As the water cools, the huge pike that were noticably absent all summer will be in shallows feeding on their favorite prey, lake whitefish. Now these fish will be caught during the dayand I would suggest any topwater crankbait (Suicks and Zara Spooks are my favorites) and hang around ‘til the sun goes down. That’s when the evening hunt begins. The biggest of the big pike push in under cover of darkness looking for a big meal.

Arnold and I have become experts on delivering exactly what they want. I like the Suicks and Magnum Rapalas. Arnold on the other hand has some handicraft in his blood. He makes lures and has a monster that looks like a full sized whitefish. We troll that monster of a lure around in the early dark hours over the shallows and listen. 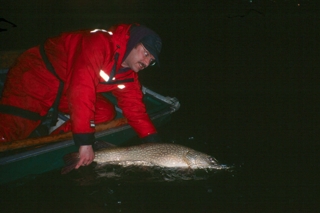 Almost always we’ll hear the strike first. It will literally sound like a run away washing machine or somebody doing a cannonball into the lake. Then the rod snaps down hard. If we can survive the strike, which runs at about 50 percent, we usually land the fish.

My dad, Gary, came to town and said, “Fred, take me out. I want to catch one of them 40 inch plus pike you talk about.” I told him that there are no guarantees. We went out, stayed into the night using the big stuff. He crunched a 41 and then a 43 incher. What can I say? 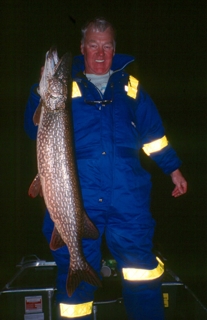 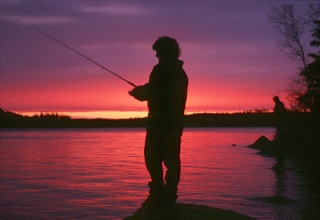