The fall has been exceptionally warm and affords us a rare opportunity. With November mere days away, many, if not all the lakes and rivers are still open. There have been ice fishing seasons where I’ve been on the lakes and drilling holes by November first. It seems last year’s wild and crazy start to the winter that seemed to just go on and on has been offset with a glorious fall this time round. 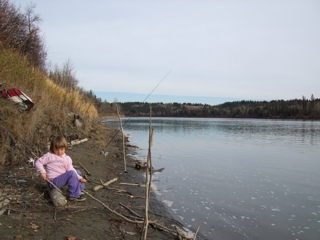 Given that, I’ve abandoned my lake fishing and searched out moving water near and far. I expect we’ll be able to cast a line into the streams and rivers (so long as the reg’s say these places are open) deep into November. The North Saskatchewan flows minutes from my doorstep and I was down there with my daughter a couple nights ago. We enjoyed a couple good hours fishing and caught a pike, had a walleye on and the guys that were just upstream from us did equally as well landing a few walleye in the short time we were there. Walleye are still thick through the city and there are some big ones still being tagged. Where they went for active presentations during the glory days a month or so ago, things have to be much slower now to tempt a bite. 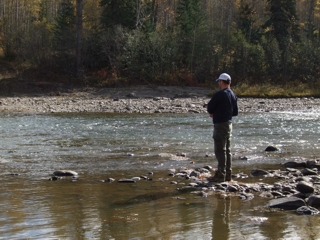 Drag a full sized dew worm or minnow along the bottom and you’ll find them. A crankbait will still catch some, but try to keep the retrieve on the slow side. Anything with pace seems to be passed up except just as the river gets dark. For about an hour there’s a flurry of activity and good fishing, but that too, I expect will shorten and subside as the days progress.

For those near the mountains, the Rockies are going hard right now as they have schooled up in monstrous numbers to spawn. Anyone who has the opportunity should get into incredible fishing for whites and expect to tag the occasional big trout, be it a bullie or a brown at this time of year.. Like I was mentioning in the Fishin’ Hole tips column a couple months ago, I wanted to hit the Red Deer River and chase some of their Rockies, which are known to be quite big. A few weeks ago I did just that. 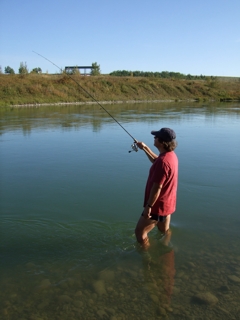 Not knowing a lot of the Red, I went to the Dickson Dam and figured I’d start my learning curve right there. Melanie came with me. I set up for Rockies and Browns but the dam it turned out, was much more of a walleye haunt. There were dozens of walleye anglers pitching jigs, crankbaits and the like. I asked if anyone was fishing for whitefish or knew where to catch them. Everyone said that all they really fished for was ‘pickeral’. So with that I was left to my own devices. We walked down a fair distance from the dam and found some fast water with several pools and back eddies. It looked like decent whitefish water so we gave it a try. 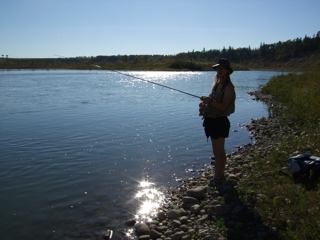 While we never tagged a fish, or so much as a sniff, there were a few good signs. Every once in a while there was a great big bathtub-sized swirl to get the heart pumping. These were big browns. They wanted nothing to do with Melanie’s or my fly and nymph rigs, nor with our small plugs, but it was really good to see them come up. We then bumped into a gentleman named Vance along with his small dog. He was pitching a standard quarter ounce jig with a yellow curly tail. He’d cast it straight across current and slowly drag it in along bottom. It’s about as walleye as you can get and we watched him catch two walleye. In talking with him we found out that the whitefish like to hang out quite a distance downstream below the dam in the faster sections, but the browns are definitely around the dam area. We thanked him, wished for a yellow jig of our own and pitched plugs and flies to no response. Still, it was a good day and we definitely learned something.

We got back to town and a friend of mine learned of my whitefish woes and gave me the name of his buddy who loves fishing the Red for whites. I’ll be talking with him in the near future. Given the great weather and the lengthened open water season, perhaps I can still make a trip back and find those famous whites. Until then Melanie and I marched off to the Fishin’ Hole on our return and promptly bought our own supply of quarter ounce jigs and yellow curly tails – just in case.