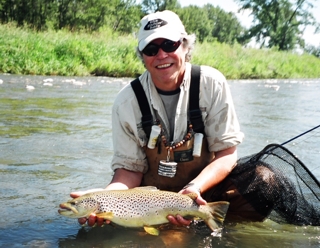 Fishing streamers, flies that represent minnows, baitfish and leeches, is one of the most effective methods for catching trout, and on average they will larger fish. For some unknown reason it is probably the least written about, and most under utilized method in the sport of fly fishing. While insects such as mayflies have their entire life documented in books and magazines, from egg to nymph, nymph to emerger, emerger to dry fly, dry fly to spinner and streamers imitating a larger meal and are very abundant, tend to get ignored.

Streamer fishing is a highly effective method for many reasons, not the least of which is that trout, and especially large trout, are predatory, and no matter whether they are actively feeding or not, find it hard to pass up a large juicy morsel passed in front of there nose. Streamer fishing has several advantages over other fly fishing methods. Casting a large heavily weighted fly in windy conditions is actually easier than trying to cast a double nymph rig with split shot and a strike indicator. The larger flies show up better in off colour water, as well as poor light conditions. Minnows and such are available twelve months of the year, including early spring, late fall and winter when insects are rare to non-existent; these big meals are still available to the trout.

I use an 8 weight fly rod for most of my streamer fishing, but with the advancement of fly rods over the years anglers can fish streamers effectively with rods as light as 6 weights, and in some situations, 5 weights. I prefer a heavier rod as much for landing bigger fish as I do for casting larger flies. With the number of anglers plying our waters these days I like to hook, land and release my fish as quickly as possible which can happen much easier with a heavier rod. Today’s fly rods are so light and powerful that casting an eight weight all day is not nearly as tiresome as it used to be.

All three types of fly lines, floating, sink-tips and full sinking can be used for streamer fishing. I prefer a floating line for small to mid-sized rivers and streams, and a sink-tip for larger, swifter waters. When fishing from a drift boat lines like the Scientific Anglers Streamer Express or RIO’s Streamer Tip are good choices. You want to get the fly down as quickly as possible and into the prime lies as you are floating by. One hint about sink-tips or full sinking lines is to keep your leader short, anything longer than five feet will cause your fly will to trail up and out of the feeding zone. I use a 3 foot piece of 10 lb. fluorocarbon, nail knotted directly onto the end of my sink-tip line and fish this until it gets to about eighteen inches long before replacing it. A shorter leader not only keeps the fly in the zone longer but is also easier to cast with large flies. There is no finesse in the “chuck and duck” with these big flies so a tapered leader is not necessary.

With around 400 different species of minnows, forage fish and sculpins etc. in North America it is no surprise that the one aspect of streamer fishing that has not been overlooked is the creation of fly patterns to imitate this food group. Old favourites like the Muddler Minnow, Spruce Fly and the good old Woolly Bugger have evolved into the Cone Head Kiwi Muddler and the Cone head, rubber legged Bow River Bugger. When picking your streamer patterns choose flies that are tied with materials that move on their own such as rubber legs, soft hackle and fur strips, as well as, provide a good minnow shaped profile. Having a variety of colours is important. Streamers that range from pure white to black should make up your streamer box. As a rule of thumb lighter coloured flies work better in clearer waters and on brighter days. Darker flies will usually prevail in stained or muddied waters, on overcast days and in low light conditions like evenings and nighttime. I quite often fish two streamers at once, separated by a foot or so of leader and I usually go with a light coloured fly followed by a darker one. I do this for no other reason than angling guru Jim McLennan once told me that’s the way he does it, that’s good enough for me.

At first glance streamer fishing may seem as easy as wading out in the stream, chucking a big fly as far as you can out into the current, letting it swing across stripping in the line and repeating while moving downstream a few steps after every three or four casts. While this is not entirely incorrect, there are a few things you can do to improve your odds of success. Throwing an upstream mend or two into your line after delivering your cast allows the fly to sink before the current pulls the line and leader tight to the fly starting it’s cross current journey. Once the fly is travelling across the current additional mends will be necessary, sometimes upstream, sometimes down, sometimes both. The objective is to keep the fly travelling across the current in a way that provides a good profile view to the fish. During this process you can impart extra action to the fly by stripping line, raising and lowering the rod tip or pumping the rod. The object is to imitate something that is either helpless, in distress, or injured, making for an easy meal. The common mistake I see anglers make is to start fishing too deep, too soon. They walk right into the stream up to their waist and start casting out as far as possible; they are literally standing where they should be fishing. The minnows and baitfish we imitate with streamers are often found in the shallower, calmer water, not out in the middle of the strong current. This brings me to the last step but one that should definitely not be ignored. Once the streamer is directly downstream from you fish it all the way back upstream until you can see it. Remember this last piece of the retrieve is when the fly is in the prime water and many times fish will follow a streamer from the fast water to the calm and hit it there.

Fishing streamers from a moving drift boat is done much the same, except reverse. The boat and angler are out in current and the fly is cast into the bank or a likely looking current seam or hidey hole. The fly is allowed to sink and then retrieved perpendicular to the current. Retrieving the fly all the way in is not as important in many of these situations as you want the fly in the shallower, slower water for as long as possible. Hitting the prime spots with as many casts as possible is the key to successful drift boat streamer fishing.

Wading anglers and those fishing smaller rivers and streams should also try fishing streamers upstream. In this method the fly is cast up and retrieved at the same rate or slightly faster than the current, covering the water from the bank out. You should always fish the water you are about to wade into first using this method. The late Lloyd Shea, the Dean of Stauffer Creek, used to fish a nymph called the Stauffer Special in this fashion, with great success. The fly which was very little more than an all black nymph, was cast upstream and then retrieved slightly faster than the current. One time when fishing with him I questioned him on the success of “his” fly. He told me that he felt the fly wasn’t as important as the method. He had determined after decades of fishing this method, that if you could get a fish to turn and come after the fly, you had about a ninety percent chance of getting him to strike. Running out room and having the fish spot you was usually the only reason an attacking trout would turn away without striking.

Given the choice most of us would like to cast dry flies to rising trout every time we go out, unfortunately that is not realistic. So next time you hit the stream and no bugs are hatching and no fish are rising give streamer fishing a chance, I think you’ll be glad you did. 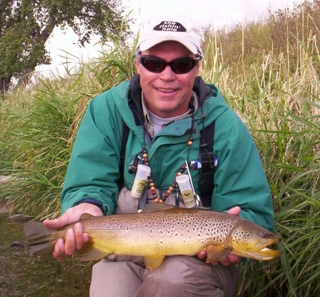 Once brown trout reach certain size large part of their diet consists of minnows and leeches. 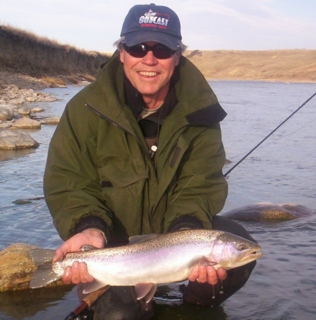 This Rainbow chased a Kiwi Muddler into the shallows and was in less than a foot of water when it hit. 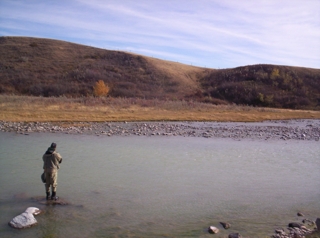 Streamers will still show up well in turbid water, one of the best times to fish streamers is right after run-off and the water is dropping and clearing. 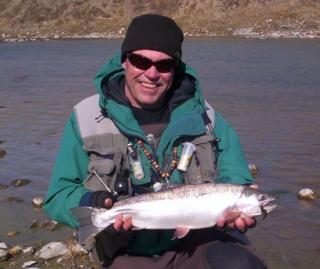 Rainbow couldn’t resist a leech pattern swung by his nose.