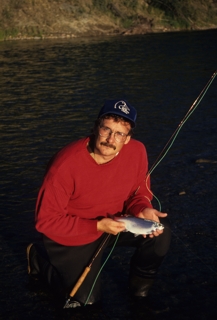 Talk river fishing in Alberta and most people immediately conjure up images of southern Alberta’s blue ribbon trout stream, the Bow River. Next on the list might be another renowned rainbow and brown trout stream, the Crowsnest. After that talk moves to the growing fishery on the Red Deer River, the multitude of wonderful trout rivers along the eastern slopes of the Rockies. They may even mention the Athabasca River and her tributaries if there’s a hardcore bull trout or walleye trophy angler in the crowd. Only if you’re willing to sit through to the final credits might you hear anyone offer the North Saskatchewan up for discussion. For those who know the river well and fish her often, this is probably a blessing, as these folks are seldom faced with the crowds many more popular rivers host on a regular basis. Sadly, though, this lack of recognition is due to the fact that far too few anglers know of the quality angling the North Saskatchewan River willingly offers to those who cast her waters. 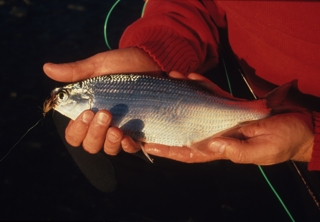 Considering the North Saskatchewan slips, gurgles and slides its way through the heart of a city with some 700,000+ citizens, many of whom are avid anglers, it’s a wonder the river has been able to keep any secrets to herself. Perhaps it’s the languid pace of the river through much of the summer that keeps anglers at bay, or the relatively high silt load that turns her waters to a chocolate milk colour, or the old adage that familiarity breeds contempt or complacency. Whichever, the river offers a wealth of angling opportunities that go largely ignored by an angling public too often frustrated by what they deem to be a dearth of opportunity. 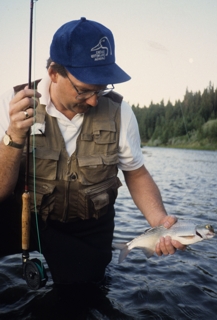 There are roughly a dozen species of fish that can be caught with some regularity in the North Saskatchewan within the Edmonton city limits alone. At the head of this list is the walleye. Walleye are present throughout the open water season, but avid trophy anglers prefer the late summer and fall when many walleye are moving through the city reach of the river. Walleye, like many river fish species, exhibit a seasonal migration in the North Saskatchewan, with the late season offering the best opportunity to hook into large fish. Those fishing from boats enjoy great success trolling, casting crankbaits or pulling bottom bouncers. Shore anglers prefer Lindy rigging, slip bobbers or casting jigs tipped with minnows, worms or leeches. 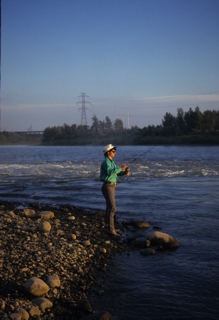 After walleye, it’s probably the lake sturgeon that attracts most of the fishing ink and attention on the North Saskatchewan. The province’s largest fish, capable of exceeding five feet in length and 100 pounds in weight, sturgeon are a popular target for fishermen throughout the summer months. The typical offering is a “glob” of worms on a snelled hook run from a three-way swivel. A pyramid weight is attached to the other side of the swivel, adjusting the amount of weight depending on river flow and velocity. It’s generally a relaxing way to fish, though the action can be fast and furious as virtually any species of fish in the river will succumb to this offering at one time or another. Local sturgeon specialists guard their best spots jealously, but working through deeper water along outside turns and other natural holes is a good starting point. 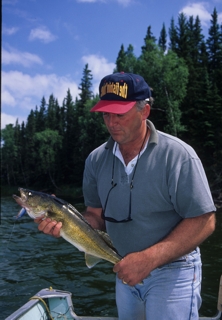 Another common species to be found in the North Saskatchewan is the sauger, a close relative of the walleye, differentiated by the black spots on the sauger’s dorsal fin and the lack of a white tip on its tail. Pike, burbot (ling cod), mountain whitefish, five species of suckers, goldeye and mooneye are also common. I’ve enjoyed several warm summer evenings casting high floating dry flies to voracious goldeye. These laterally compressed, chrome-coloured fish are fun to catch and put up a pretty decent fight for any angler using light tackle. A worm and a bobber is an equally effective tactic and can be fished easily from shore. Goldeye are a great target fish for youngsters and are generally plentiful throughout the season. 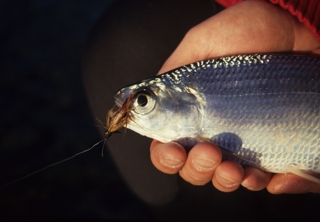 So where on the river should you fish? As with fish everywhere, cover and food availability are the keys to locating productive spots.

Creek mouths, storm water discharges, the heads and tails of islands, bridge pilings, rock piles, riprap shorelines, back eddies and natural deep holes all provide prime holding and feeding locations for fish of many species. When all else fails, select deeper water over shallower water, remembering that outside turns or bends in the river are typically faster and deeper than inside bends. Popular shore angling locations within the city include Goldbar Park, Dawson Park, the Rossdale Water Treatment Plant, William Hawrelak Park, Whitemud Park and Fort Edmonton Park. With a little effort, you can work your way up or downstream from these and other access points to the river. Be careful though, as shorelines can be awful muddy once the high water period (June/July) is behind us. I still recall the evening a few summers ago when I found myself up to my knees in muck below Goldbar Park. It took considerable effort to extricate myself from the mud and I got back to the truck exhausted, and covered in mud from head to toe. 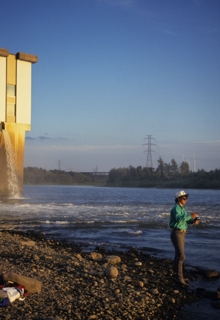 Those who want to launch trailered boats in the city are limited to the Capilano launch at the north end of 50th Street on the south side of the river or Laurier Park on the north side. Many of the aforementioned common access points are suitable for putting in hand-launched boats and canoes.

Whenever fishing from boats in the river, it’s advisable to fish upstream from your launch point. That way, should you have any motor problems or find the river too difficult to paddle, you can always drift back down to your vehicle and safety.

Tackle requirements for effectively fishing the North Saskatchewan need only be as complicated as you want to make them. A medium weight spinning rod/reel combo, a bobber and a can of worms are normally all you really need to ensure regular action, though more advanced tackle can be an asset. This is particularly true if you’re seeking walleye or if you hook into one of the river’s big sturgeon. Talk to the staff at The Fishin’ Hole for updated advice on what’s happening on the river throughout the season. My experience has been that most are up-to-date on local conditions and more than willing to assist anglers not that familiar with the river.

Remember, too, to check your regulations prior to hitting the water for information on species limits. Consumption of fish caught in the North Saskatchewan River should be done cautiously as levels of naturally occurring mercury are high. Alberta Sustainable Resource Development recommends that children under the age of 15 and women of childbearing age should not eat these fish, and that others should restrict their consumption to no more than one meal per week.

With its abundance of both species and numbers of fish, the North Saskatchewan is the perfect solution to those looking for a variety of fishing fun without the expense, time or travel many destinations require. It’s a great way to unwind at the end of a long working day and an ideal place to take the kids to burn off a little excess energy. Best of all, you can never be sure what’s at the other end of your line when that familiar tug vibrates through your hands.