When winter arrives many fly fishers put away their rods and find other ways to pass away the time in this off-season. Fly tying, tackle tinkering, book reading and various other diversions help pass the Canadian winter. In southern Alberta, where I spend most of my fly fishing days, we have a very short season; many streams don’t open until June 15th and close again on October 31, not nearly long enough to suit me. A fortunate few will avoid what has been dubbed the “shack nasties” by heading to warmer climes to fish for bonefish, permit, tarpon and other saltwater fish. Fortunately there are a few rivers in Alberta that not only have no closed season, or sections that don’t close, but also have stretches of open and fishable water all year round. The advancement of outdoor technical clothing and equipment combined with the occasional Chinook or bout of warmer weather allows the Alberta fly fisher to cast off the winter blues every once in awhile.

There is a couple of reasons that rivers in harsh climates will have open water all year long, some natural, some artificial. One example of natural reasons is the Crowsnest River in southern Alberta which has under ground springs that release warm water into the river. This in combination with the Chinooks that grace the region, as well as the fact that the river originates from Crowsnest Lake, not mountain tributaries, results in sections of the river flowing free of ice all winter long. 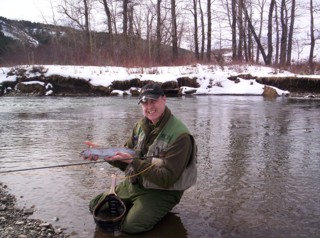 In the same area the Oldman River Dam creates what is referred to as a tail water fishery; the water released from the reservoir is cooler in summer and warmer in winter, good conditions for trout to live. The temperature of the water being released from the dam is above the freezing mark and therefore the river directly below the dam remains flowing 12 months of the year. The length of fishable water will vary from month to month and year to year, depending on air temperature. This is also Chinook country so days with air temperatures well above freezing allow the ardent fly angler to wet a line.

The Bow River in Calgary also receives these same Chinook winds and in combination with warm water released from the City’s water treatment plant keeps the river open from the Calf Robe Bridge downstream. Many anglers take advantage of this winter angling opportunity.

The North Raven River (Stauffer Creek) is one of the few spring creeks we have in Alberta. The Stauffer bubbles out of the ground and flows at a cool 40 degrees Fahrenheit. Its upper reaches have open, fishable water most years but the absence of Chinooks in this area diminishes the prospects of winter fishing other than during the occasional warm spell. 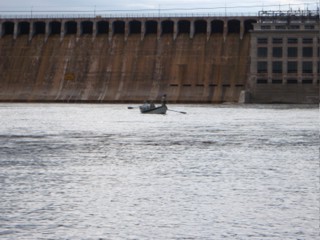 The Missouri River, below Holter Dam, near Great Falls Montana, is an example of a tail water fishery that can provide fly-fishing opportunities 12 months of the year.

The Red Deer River below the Dickson Dam, west of Innisfail, is also a tail water fishery that has Brown Trout, Walleye and plenty of Rocky Mountain Whitefish. It’s funny how Rockies that many anglers look down their nose at during the summer months can become a noble game fish and put up a heck of fight during a winter fly fishing outing.

Understanding what fish require to survive during the harsh winter months can be the key to successful angling. Trout will not be where you find them in the warm weather months, they move into what is referred to as their wintering holes. These are spots that are slower, deeper and large enough to overwinter large numbers of fish. Holes below riffles or rapids provide the food and oxygen needed to survive the winter.

Trout lying in these holes will be lethargic and are not going to chase flies. To be successful the angler must get his nymph deep and within easy reach of the fish. Slow and deep is the mantra of winter flyfishing. Bead headed nymphs, like the Pheasant Tail, Prince and Hare’s Ear will all work, usually in a little smaller size than in summer. That being said occasionally the angler will get lucky and come across rising trout. They will usually be eating tiny midges, a midge pattern such as a Griffith Gnat can occasionally work but more often than not it turns out to be just casting practice. 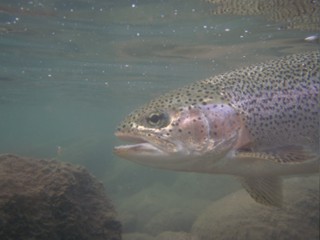 Most of the equipment used during the warmer months of the year will suffice during the winter, but a few things will help your winter fly fishing experience go better.
Some fly lines, those made for distance casting, have a very hard finish and during cold weather are very tough to cast and have high memory. I suggest sticking with general purpose or limper lines. Frozen guides are the bane of the winter fly fisher but there are a couple of ways to reduce this problem. Dipping your rod under water is the easiest way to thaw the guides. Also if you keep your line a little shorter and don’t strip in as much your line won’t transfer as much water up into the guides. There are also some commercial products out that will help keep your guides clear. Stanley’s Ice-Off paste from Loon is applied to the line and the guides. It helps to reduce icing, will not harm your fly lines coating and is environmentally friendly.

Even on the nicest of winter days the water temperature is going to be COLD! I recommend buying a separate set of wading boots for winter conditions. These boots should be one size larger than your normal wading boot allowing additional room for heavier socks. Nothing will get your feet colder faster than tight wading boots. Anybody who has worn felt soled wading boots during the winter can tell you that walking on snow with wet felts is not fun. You will gain six inches of height as the snow clings to the bottom of your boots and it is neither fun nor safe. If you are getting a set of boots strictly for winter conditions look into different soles. There are several options out there including the Vibram sole from Simms or the studded rubber sole insert from Korkers. 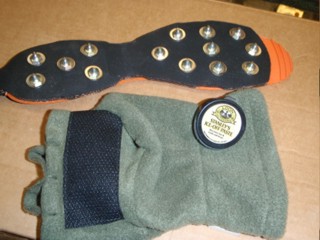 Fingerless gloves, rubber soles and Stanley’s Ice-Off Paste should all be part of your winter fly fishing arsenal.

Breathable waders have become the most popular choice of anglers these days, and rightly so. If you are going to winter fish in breathable waders layering is the trick. I still wear my neoprene waders in late fall and through the winter. They do have the disadvantage of being harder to put on and take off but they definitely also have their benefits. Neoprene waders are much tougher than breathable waders. If you do get a leak, especially pinhole size, you will get a lot wetter, quicker in breathable waders than in neoprene as they tend to seep rather than leak. The insulating qualities of neoprene more than make up for the disadvantages and very few anglers complain about being too warm in winter conditions. Hypothermia is a real danger so take frequent breaks to warm up.

So this winter take advantage of any open waters near your home and give winter flyfishing a try. It may not be as much fun as a great dry fly hatch in summer but it sure beats sitting in an easy chair watching the Gardening Channel!