Walleye can be Humbling

A few years ago I was prefishing for a Walleye Tournament put on by the Western Walleye Council in June on renowned Lesser Slave Lake. It’s the kind of lake where anyone can put a pattern together at almost any time of year let alone June’s ‘summer peak’ bite. To describe it as a ‘strong fishery’ would be an understatement. To give you a little background into the entire scenario...walleye tournament guys are clicky and tend to belittle certain angling techniques. The ‘pickerel’ rigs and rubber tailed jigs being two of the most highly ridiculed methods among the self emblazoned ‘elite’ walleye fraternity. Both techniques are very effective on bringing walleye to the net. Still, I challenge you to find a pickerel rig in any of the tournament boats. A hard core walleye guy fishing with a pickerel rig is taboo. It would be much like the famous Bow River guide, Barry White, fishing for the elusive ‘Bow River Brown’ with marshmallows - it ain’t gonna happen. It’s not being snobbish. More so, it’s being selective. The yellow rubber tailed jig! Albeit effective at certain times of year and futile at others is another one of those ‘things’ a serious walleye guy should never admit to having in his boat. Although possessing ‘rubber tails’ won’t get you thrown out of any of the ‘in’ walleye circles as would a pickerel rig. However, it may discredit your perceived prowess and savvy. After all, how many big dollar tournaments have been won on rubber tails?...ahhh....None! So where am I going with all of this??

This spring weather conditions across western Canada that year were far from the norm, therefore, angling conditions and failsafe patterns were also far from ordinary. Lesser Slave Lake, like many others across the west that particular season, confused many anglers...but not all. Seasoned tournament guys raced hither and yon desperately trying to put a solid ‘big fish‘ pattern together. Heck...most of the tourney gurus were just trying to catch fish and save face. Blades, cranks, rigs, leeches, hand picked night crawlers, minnows, jigs, lead core, sonars, gps, even under water cameras... fishing was tough. Not all struggled to catch fish...not the locals; nor some of the older guys who still go ‘just fishing’ to catch supper.

Let me paint you a picture. It’s the day before the tournament and none of the guys have a solid pattern that will yield big fish. As a veteran on the tournament scene, I decipher this as observe boats scurrying to and fro. No one stays in one place for long and there are no hot bite rumours floating about. It’s been my third day on the water and catching a walleye has been a struggle. “This is Slave Lake!” “Have I lost my touch?” “I can’t even catch a Walleye.” Now I don’t mean to be boastful, but I can usually (or so I thought) catch a walleye or two if they are in a lake. I have been humbled before - never quite this bad. Here I am, at 7:00 am, in a quiet bay where, the day previous, an elderly gentlemen was kind enough to share some knowledge. Maybe it was the hefty perch I caught and passed along to him. Maybe he was a nice guy not rapped up in the tournament frenzy. Anyway, he had a pattern, he was consistently catching good numbers of walleye. He had caught a few good ones while trolling a white rubber tail in three and a half to five feet of water behind his 14 ft aluminum and his 25 hp engine. Another tid bit about tournament guys, they don’t like running a gas engine in under ten feet of water. Hence, the electric trolling motors. This breathless sunny morning finds me in the bay accompanied by two other boats. Just a couple of local retirees and there wives fishing in their 12 or 14 foot aluminums - nothing fancy. As I steered my ‘Pro V’ ever so ‘expertly’ along some emergent weed growth in five feet of water, I saw a rod tip double over and an elderly lady reel in a legal sized walleye. Then, another rod goes off, and another and so on. These two boats were pounding double headers before my eyes and I hadn’t had a sniff. It seemed as though white rubber twister tails were the order of the day. I tried everything. You name it, everything but rubber tails and cranks. I tried finesse and slow and flashy and fast! I couldn’t buy a fish. To add insult to injury, the angler’s in the other boats kept asking how things were going for me. “Did I catch breakfast yet?” “Any legal fish yet?” Of course with each pass by their anchored location they unknowingly rubbed salt in my wounds. Finally, they had their limit of legal fish and headed in for breakfast. I have seen some pretty specific bites in my time, but this was unbelievable. I was alone in the bay. It was flat calm. Two boats caught & released more fish than I care to admit and I couldn’t hook one walleye. Not one. I could endure it no more and decided to head back to the launch, moor my boat, run a half mile to the local gas station to buy a few white twister tails.

I returned to the bay. The first cast produced a walleye. Almost every cast after that did the same. These fish were in there feeding on minnows. A steady retrieve from a rubber bodied jig was all it took. They hammered the lure so hard that the plastic bodies would tear in half if fish struck short. As more fish moved into the bay the next day and the day after that, the fishing became more and more intense. Anything that travelled fast, had flash, and had a hook on it caught fish. I even trolled rubber tailed grub bodies behind 1/2 ounce bottom bouncers. Would you believe that technique produced as many fish as night crawlers with spinners. Yeah...believe it. I never would have had I not been there.

Having said all this, we didn’t put enough fish in the boat to place in the money. The humbling lesson in that bay by the man in the little blue boat and the two elderly couples in their small aluminums was worth far more to me than any placing in a tournament. You can now find a small section of rubber tails tucked away discreetly in my boat. 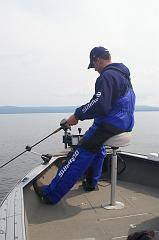