Live bait, light lines, and choice fishing locations are probably the three biggest factors you or I can manipulate to get more trout to bite. Utilizing the advantages of all three will double, or triple your catch rate. 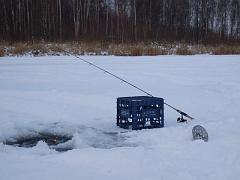 Many fish rely on their eyesight to find food and alert them to danger. This reliance on sight varies significantly from fish species to fish species, but when it comes to trout, they place a heavy emphasis on what they can see.

I’ve been ice fishing lakes where I’ve watched trout repeatedly come in, only to reject my fly or bait at the last second. They appeared to be line shy. Typically I use six pound test, but when it came to fishing the clear waters of winter, it appeared that was too thick. I still caught fish, but I saw more reject the hook than bite it. I started conducting experiments and I did a couple things. One, I tied on a few feet of thinner tippet line to the end of my main fishing line. This had the desired effect and I got more bites, but there was a price. Sometimes the knot where I had tied the tippet line to the main line would catch the edge of the ice augured hole and the line would snap. A split shot placed just above the knot greatly eliminated this problem, but sometimes I didn’t want a split shot on my line. 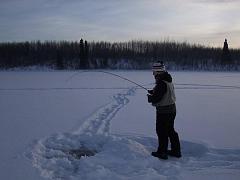 I also tried fishing four pound test side by side against six and inevitably, the lines spooled with four pound test got more bites. I wondered if I moved it down to two pound test if I would get more bites still. I did, in fact I got a lot more bites with two pound mono but I broke off to so many dang fish, that using it was counterproductive. With few exceptions, I now run four pound test when chasing trout. It seems to be the best combination of maximizing bites while having the strength to play and land fish. 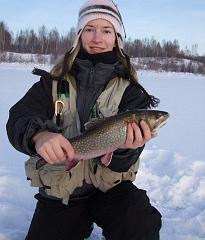 To get a trout to bite, going natural is almost always the best producer and if I had to hang my hat on one bait, it would be the worm. It doesn’t matter too much if it is a trout worm, earth worm, or dew worm, the key is that it’s lively. A lively worm catches fish. To keep the bait lively, keep it warm and when you put it on the hook, only hook it lightly once. That way it does a lot of wiggling. Trout love ‘em that way. Other baits worth trying are live maggots and where permitted, small frozen minnows. The minnows are a sleeper bait, but they can and do produce big bites. 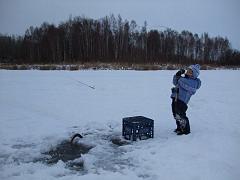 Everything I said above, however, doesn’t do a lick of good if we’re fishing a spot where fish do not live. There are many parts of the lake that don’t hold a lot of fish and nor will they ever. We want to avoid these places and fish the good spots. Fish need shelter and they need food. Shelter can take various forms, but the two most common are weeds to hide in or deep water. This is where fish feel safe. As for food, many of a trout’s food preferences will be found shallow. Dragon fly nymphs, caddis fly nymphs, leeches, snails, and minnows all like to live in and around near shore cover and this includes weeds. 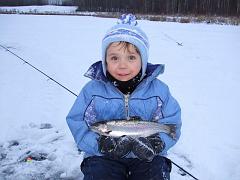 When it comes to ice fishing, I look for a spot that is close to deep water and borders up on weeds. The weeds provide the cover for many of the critters a trout likes to eat and the access to deep water nearby gives trout a feeling of security. When I’ve found these conditions, I’ve found an area with high potential trout traffic. From there, I pull out my rod and reel spooled with four pound test, I’ll attach a lively piece of trout worm and lower it down so it’s a foot above bottom. 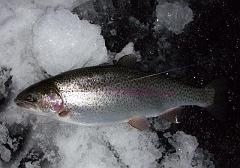 In the dead of winter when trout activity is low, I like to fish with set lines. That is, I’ll lower the bait down and just let it sit there. I don’t wiggle it or anything. The wiggling of the trout worm is all that’s required to entice a bite. As the ice fishing season begins to wane with the approach of spring, trout get more active and a number of presentations work. Tipping a piece of worm on a jig will get fish to bite, as will jigging a fly, jigging a spoon or dancing a wireworm through the depths.

To convert bites to fish hooked and caught, here are a couple helpful tips about hooks. First, the hook doesn’t need to be big to hook a fish. I typically use a size 6 for worms, but I add a little something special. I’ll use the pliers and ever so slightly twist the hook so the point of the hook is offset from the main shaft. This gives more positive hook sets. I’ll also keep the sharpening stone handy and make sure each hook I drop down has a sticky sharp point on it. 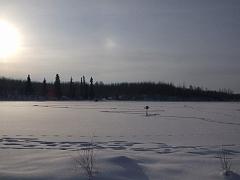 There will be days when the bite is fast and furious and no matter what is being used or how, the fish will be biting. I like these days. But there are going to be many other days where we’ll have to work for the bites and it’s on these days where these techniques will shine.