After a long winter with little or no fishing most fly anglers can hardly wait to get out on the stream to cast their flies. Early season trips involve more than just fishing, there are flies that were invented at the vise to be field tested, wader repairs to be checked, fly lines to be stretched, and knots to relearned. While conditions may not be ideal, it matters little, (as long as the wader repair was successful). Getting out early in the year just as things start to unlock from winter’s icy grip is a wonderful way to spend a spring day. Getting back into the rhythm of casting the fly and walking the stream is reward in itself, even if conditions aren’t perfect. As long as the temperature is above freezing and the wind isn’t howling the early season angler stands a good chance at hooking some fish.

Spring is a time of renewal and a great time to be out on the river.

Early season water conditions will begin very low and clear, then start to rise, dirty up and then turn to full blown run-off. This generally puts the spring flyfishing season on hold. Most rivers and streams will experience several run-offs, the first being when the snow and bank ice along the stream melt. The last being when melting begins in earnest in the mountains and hills at the stream’s headwaters. Usually there is a period or two of low clear water between these two events. Rivers that run through cities or towns, such as the Bow River, will also experience storm drain run off from melting of snow from yards and roadways; spring rains will also cause stream levels to rise and will usually cloud the water. 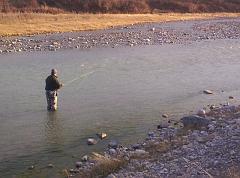 In murky waters your flies should be fished slow and deep, that is where the fish are.

Locating trout early in the year, especially in high water conditions can actually be easier than you might think. Instead of being spread out all across the river or stream, trout will seek out shelter from the current. You will find them in back-eddies, in the deepest parts of pools, behind obstructions, and many trout, especially in larger rivers such as the Bow River will head to the banks. The current naturally slows closer to the bank and many fish will congregate there. This is the reason that anglers who float the Bow have good success floating out from the bank and casting back in towards it with streamers or nymphs. These edges and back eddies also collect food for the early season trout to dine on which is very important at this time of year. Rainbows will be getting ready to spawn, which for some means a long journey up a feeder creek, and fattening up after a long winter is crucial. 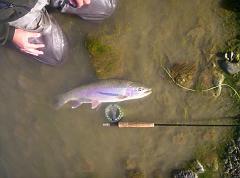 Don’t let murky water discourage you, trout still have to eat and if you’ve got two feet or so of visibility then you shouldn’t have any trouble hooking up.

While it may seem that finding food in early season conditions may not be easy for the trout, it is actually not as bad as it seems. Increases in water velocity dislodge many aquatic insects and they end up being washed into the same areas that the trout are. Some insects that have a longer aquatic life, such as stoneflies, make not only a meal, but a very substantial one. Aquatic worms, imitated by the good old San Juan Worm, also become more abundant as they get washed downstream in the current. Higher water levels also put food items into the water that are not normally there. Earthworms, mice, ants and beetles that live along the edges find themselves washed into the higher flows and the trout will dine on them with gusto. Trout also have the advantage of overhead cover that they wouldn’t enjoy in normal water conditions. A trout that would be subject to overhead prey, such as Eagles or Osprey, is concealed from danger by the extra water depth and the water discoloration. For the fly fisher putting the fly as close to the trout as possible is more important than the fly selected. Water temperatures are still quite cold and a trout is not going to move very far to eat, therefore you put your fly as close to the trout’s snout as possible.

Early in the year you have to put it as close to the trout’s mouth as possible, with the cooler water temperatures and murky water they won’t move far to take a fly.

I like to use a two nymph rig with a large dark stonefly and a second smaller nymph or San Juan Worm. Darker flies tend to show up better in turbid water so stonefly patterns such as a Kauffman Blackstone or Montana Nymph in black are good choices. Even though these are big flies, extra weight will often be necessary to get them down in heavy water. I usually start with two #4 split shot placed 6” above my top fly and adjust it accordingly. You need to keep your fly as close to the bottom as possible as that is where the fish will be. In streams where stoneflies are present they are a good choice to use as a searching nymph. Stoneflies have a longer aquatic life-cycle than most other insects. They live and grow under water for several years and are therefore always present in the nymphal form. In Alberta our earliest mayfly to hatch is the Blue-winged Olive. An imitation such as a pheasant tail nymph or a brassie is a good choice for your second fly. 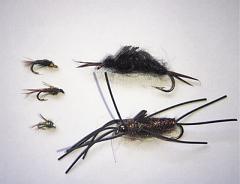 I prefer a rod of at least 9’ in length for all of my nymphing; the longer rod helps with line control. At different times while nymphing you will need to mend, throw slack into your line, and lift as much of your line off of the water as possible, a longer rod aids greatly in all of these. The longer rod length will also help you to cast what can become quite an onerous rig made up of flies, split shot and strike indicators. A floating fly line in a weight of 5 or 6 is usually sufficient but a 7or 8 weight can make the casting a little easier. This is especially true if you are fishing deep in discolored water and there is no chance of your line spooking the trout. Sinking tips can be useful at times particularly in deeper water and back eddies. Leaders of 9’ attached to your floating line with get you down to the fish in most situations. Your flies can be attached in several methods. If you have a favorite during the rest of the year use it. The three most common methods are the dropper method, the eye-to-eye method and what is sometimes referred to as the crappie method. In the dropper method you attach a piece of tippet to the end of your leader with a blood knot and leave one tag end long (4”-6”), one fly is tied to the tag end of this knot and the other to the end of the tippet. In the eye-to-eye method the first fly is attached to the end of the leader, a piece of tippet (18”-24”) is attached to the eye of the hook and the second fly is attached to it. The crappie method is used quite frequently by guides, especially if they are providing the flies, because hang-ups on the bottom usually result in the losing of the weight only, not the whole rig. In this method the flies are attached to the leader with blood knots, separated by a foot or two, and then the weight is attached to a slightly lighter piece of tippet attached to the bottom fly. The split shot is then attached to the bottom of this piece of tippet. If the split shot hangs up on the bottom the lighter tippet should break and you will lose only the shot, not your flies.

The nymph fisherman’s choice in strike indicators has proliferated over the last number of years. The mainstay corkies and yarn indicators that we used for years have evolved into the latest and greatest “Thing-a-ma-bobbers” of today. Strike indicators were developed to do just that, indicate strikes that you wouldn’t normally feel because your flies are drifting naturally and you are not in direct contact with them. I often see anglers using strike indicators as bobbers, which is wrong. Your indicator should not float your fly but rather let it sink and drift naturally. If your indicator is sinking, but you can still see it, that is good, your fly is getting down and drifting naturally, if your indicator is sinking and you can’t see it it’s time to move it farther up the leader or lengthen your whole rig. At no time during nymphing should your strike indicator float your fly. 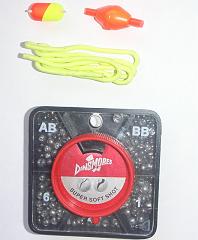 Strike indicators and split shot are the tools of the trade for the early season nymph fisherman.

At this time of year other items can help things go a little smoother. Some ice off paste to keep your guides from freezing, mitten clamps so you don’t have to fumble with forceps with finger holes. Warm clothing such as toques and fingerless gloves, neoprene waders if you have them, proper layers under breathables if you don’t, will all help to make your early season days more pleasant.

Early season nymphing is a great way to shake off the winter blues and get out for some fresh air and exercise. Be sure to check your regulations regarding stream opening dates ,as well as, the number of flies you can use. These vary from province to province and state to state. There is nothing like the tug of a trout early in the year. If there is some open trout water near you, dress appropriately, grab your rod and head on out, you’ll be glad you did.