The Most Important Hatch of the Year

It happens every spring on every lake I’ve been to. Chironomids hatch in such profuse numbers that trout gorge on them exclusively. This is an event where the fishing is either out of this world fantastic, or it’s downright miserable. The determining factor is whether the angler is fishing a chironomid as those that are catch fish like crazy while those that aren’t, watch. 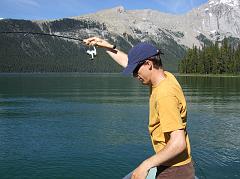 Now I know chironomids are extremely important in the spring, when they hatch by the billions, but what I was surprised to learn was how critically important these bugs are in other seasons. In an ongoing scientific study by University of Alberta PhD student Justin Hanisch (sponsored by the Alberta Conservation Association, Alberta Sport, Recreation, Parks and Wildlife Foundation, Alberta Ingenuity Fund and the Canadian Circumpolar Institute) it was found that during the height of the 2007 summer, a whopping 55.6% of trout sampled had chironomids. This was followed up in 2008 where of all trout sampled, 52.6% contained chironomids. 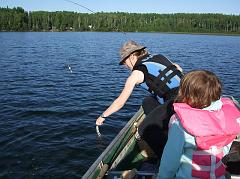 The statistic is extraordinarily significant in that for both years chironomids were found to be the most common food item eaten. Trout love ‘em.

What that means for us anglers is that chironomids aren’t just a hot ticket come late May through June; they’re an everyday target that is effective throughout the seasons. So if you’re looking to catch more rainbows, brookies, browns, goldens, cutties, or whitefish, get your chironomid hat on and find a way to get good at it. 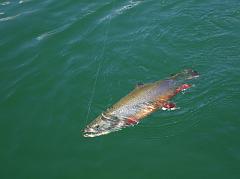 The glorious thing about chironomid fishing is that it is not an exact science in prairie potholes. In fact, these trout are uneducated and easily fooled. I love oil patch trout. While there are a numerous imitation chironomid flies out there, it is not necessary to carry them all (but can be fun). I have found that if I have three flies from the entire selection I will catch most of the trout most of the time. The first fly, in my opinion, that is the hands down, all around winner is the bead head pheasant tail nymph. This fly can’t seem to help catching fish and is a must have in every trout anglers fly box. For a lake application, a selection of size 8, 10 and 12’s would be perfect. The next fly is the bead head prince nymph which is darker than the pheasant tail and comes in handy if the hatching chironomids have darker bodies. My last selection is a lighter coloured imitation called the bead head hares ear nymph. These three flies in the above sizes and colors will cover the majority of chironomid fishing opportunities. 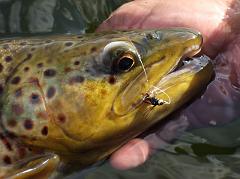 So when you’re out fishing and you watch a dark coloured chironomid come up match it with the dark coloured prince nymph. If the bug is a medium brown, use the pheasant tail and if the bug is lighter, the hares ear will do the job. That pretty well sums it up in a nutshell.

To fish a chironomid takes two approaches. For the spin fisher, a modified slip bobber system is ideal. For the fly angler, a strike indicator on a long leader and floating line would be perfect.

Chironomids live in the mud and goo of the lake bottom and after a time, they slowly, very slowly rise to the surface to hatch and fly away. This assent can take minutes to cover a few feet of water, so for a hungry trout, the chironomid simply looks suspended, not moving at all. To help lift them to the surface they generally produce a tiny air bubble to give them buoyancy. This is where the bead head has its advantage as the gold bead gives off a similar glint, like an air bubble, drawing attention to the fly. 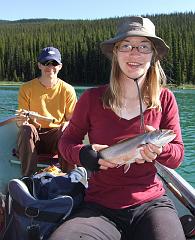 To fish a chironomid the real secret is patience. Use the smallest slip bobber set up you can find, fish it on light line and just let it sit there. This is how the naturals look and this is how your fly should look. There is one other trick that helps me catch more fish. When I tie the fly to the end of my line I twist the knot on the fly over towards the hook point so that the fly hangs horizontally. This makes the fly look more natural and will entice more fish to take the bait.

Don’t look for ripping strikes off the chironomid, it just doesn’t happen. Instead, look for real slow deliberate strikes as if the bobber was sinking on its own. As soon as that happens reel up the slack and set the hook with a smooth sweep of the rod.

Chironomid fishing takes faith and patience but when you get the hang of it, you’ll never look back. The fishing is great and even on slow days, with this tactic in your back pocket; rare will be the day a trout doesn’t bite.