Can you blame me for planning a family holiday to Cold Lake to fish for lakers!! Anyone would do the same if their family would let them. So Linda, my two daughters and a slew of Linda’s cousins headed for Cold Lake. Bad idea. First off the weather was brutal that first week in July. The water was cold so there was no way the family would hang out at the beach so I could go fishing. I did sneak in a few hours and started piecing things together for my next trip that I was conniving. We decided to head the caravan back to the city to spend some family time in the comfort of home and. . . so I could return on the weekend with a cousin of mine and do some serious fishing. When I did get to fish on my first trip, I spotted some baitfish over a small hump but also a few larger echoes that would indicate lakers. I had caught fish there in the past and flogged the water for several hours at 22 to 35 feet where the odd fish echo showed up on my sonar (fish finder). That was also where the local chat indicated the fish were being caught.

The next weekend saw me back out there on the Friday evening with my cousin Justin, flogging the same spot. . . nothing. There was very little action on the sonar, it was time to move. We decided to cruise across the lake to a big drop near a point off the main shore where I had caught fish in the past. I cruised at about 35 mph so I could keep track of the bottom. The lake is certainly deep. The bottom came gradually up to 250 feet, then 220, then abruptly rose to 60 and immediately back down, less steeply to 220. I had found a sunken island or hump. Bait was everywhere, showing up as large clouds on my sonar at around 100 to 170 feet. Some of the bait was up on top of the hump in less than 60 feet. Numerous large echoes appeared at the 150 foot level with the odd one showing up between 35 and 50 feet. Which ones were the lakers? Were the deep ones whitefish?

We did catch one with what was left of the evening at about 50 feet before darkness fell. 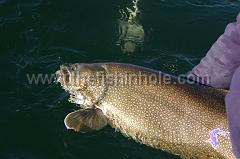 We were satisfied that the next day we would have a great starting point providing that fish wasn’t just a fluke. We were fishing by 7 AM the next morning. We hadn’t even had the second rod down yet when the down rigger rod started bucking at the strain of a fish - 50 feet; right where we were marking the majority of the shallow fish. That was quick!! I set the second rod a 37 feet as we were seeing several echoes of fish there as well. The rest of the day was incredible. One of my best days on the water and definitely my best day of lake trout fishing ever. By 10:45 AM we had caught and released 17 lakers with several in the 9.5 pound to 13 pound range. By 7:00 PM we had tallied 44 what a day! The best one we landed was somewhere in the low 20 pound range. It was a large mouthed, very long fish that Justin caught. 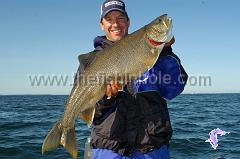 After a couple quick photos of that fish we gently released it back into the cold water. We tracked it on the sonar as it went down to 150 feet and then settled in with the rest of the fish at that depth, that was cool. We did catch a couple of fish at 100 feet and another few at 150 proving that some of what we were seeing at those levels were also lakers. We were diligent watching my Lowrance LCX-104 to learn more by interpreting what we saw as the fish were being caught. The fishing was so good I called my wife to get domestic clearance to be back home Sunday late afternoon rather than late Saturday night as planned. I had to promise that I would barbecue a small lake trout for the family when I got home; a small price to pay for another half day of fishing. Justin and I looked at each other and said "We can’t leave this!" Sunday proved to be just as great a day with far more interesting tales from the sonar.

The beer and pizza went down very well in the hotel room that night as we watched one of the stages of the Tour de France. I know it wasn’t midnight when two exhausted anglers were fast sleep without catching the last part of the stage. By seven the next morning we were back at our spot and again didn’t get the second rod down before we had a fish. After a few fish into the morning and on my turn at the rod, the down rigger release popped and the reel screamed. "Big fish!" That one hit the anchovy at 50 feet. Justin had the Scotty electric downriggers up and out of the way in no time. After a few minutes of pumping below the boat the fish sounded straight down to 150 and sat there. We could see this on the sonar proving again that what we saw ‘down there’ were lakers. Several minutes later we had a fish in the high teens in the boat, photographed and released.

On several occasions that day we would see fish at the 35 to 50 foot mark, hit the throttle and turn the boat hard to change the speed of the outside lure. This often resulted in a strike and one of the surges produced a 20 pounder. Lakers are notorious for following a lure and not hitting. I had a fish follow the cannon ball’s chartreuse release up to the boat and follow it for several yards before descending back into the dark, deep water. On several occasions we would see them on the sonar, following the hook up from deep water to check out our lures at 35 to 50 feet, and then head back down again. You have to understand what your fish finder is telling you to interpret this. Check out this month’s fishing tip for details on how to do that.


Great trip!! Can’t wait to do it again.