Ironside Pond north of Caroline is one of growing number of catch and release trout fisheries springing up across Alberta. I love this tiny pond, and I hate it. On the plus side the trout grow large making it hard, seriously hard, to catch a trout under 40 cm. Most are between 40 – 50 cm and every day my friends and I fish it we catch a couple in the 50’s. The pond is small, intimate you might say and having fished it many times over the past summer I’ve come to know the small details. There’s a depression that usually hides a trout on the launch side of the closest beaver lodge and, along the shore north of the launch there are undercuts that house big trout. I know where many of the trout will be, but so do many of the other anglers who fish it. Over the course of a season these trout see a lot, a whole lot of fish hooks, mostly flies. 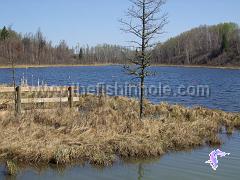 That leads to a challenge: how to catch them when summer is coming into fall and the trout are at their wariest? I’ve found a few things will turn window shopping trout into full on consumers and the answer is in eliminating the spook factor. There are a few ways to do this and here are some of the ideas I tried that have worked. 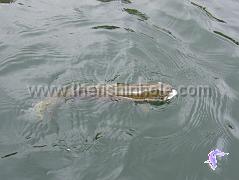 On the fly front, the first thing I did was extend the lengths of our leaders. When I was casting flies, I’d use a 15 foot tapered leader and add a few feet or more of tippet. That way the fly is a mile away from the line on presentation. I spooked fewer trout this way and got more bites. This set up was great for the dozen or so fish I could target around the shores, but once they’ve seen a fly or two, they weren’t biting no matter how good an imitation I threw at them. 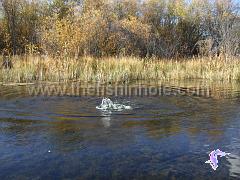 I then decided to target the trout in the main lake basin and they could be anywhere, deep, shallow, on the surface or somewhere in between. I kept the theme of long leaders in mind for these fish too. I have a fast sinking line dedicated to trolling and an intermediate line for trolling and casting. On the fast sink I never cast it so I don’t mess with tapered leaders. Instead I tie on 25 feet of 3X tippet and attach a big buggy looking fly. The long tippet reduces the spook factor and the deep presentation gets to fish that have seen fewer hooks. Double Shrimps, sparsely dressed Woolly Buggers, 52 Buicks, and Spratleys are my flies of choice. On the troll I vary the speeds and the depths to continually throw these fish off their game and pay attention to bites, even if they’re not hook ups. 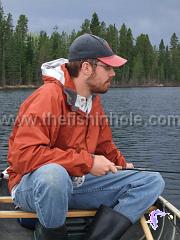 For example, I typically got more bites when I was trolling the fly away from the sun through the midday period. In the mornings and evenings this orientation didn’t matter, but during midday it was something worth paying attention to. Another valuable tidbit was trolling pace. I often cranked my electric motor sharply to one side, and then the other with the boat more or less heading in a straight direction. This caused the rods on either side of the boat to speed up or slow down dramatically depending on their position in the turn. Often, strikes would come at one particular point of the turn, say for example; the outside rod that was sped up got the hits. With this nugget of info in my pocket I could put a little more pace into the electric and usually get more bites. 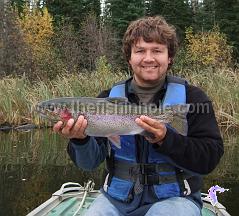 One of the best ways to sneak up on wary fish is to make them believe you’re not there at all. I’m convinced that on heavily fished lakes the boat spooks fish. This puts them on guard about anything that passes over head and my solution is to extend my reach by switching to what I’ll call long line trolling. That is, I’ll let out an extraordinary amount of line to separate my hook from the boat.

This presentation has its drawbacks and it comes with the expense of missed hits. With upwards of 80 to a 100 feet of line behind the boat there’s a lot of stretch causing a near disconnect between rod, hook, and fish. Hook sets are meaningless as very little energy from the snap of the rod actually makes it to the hook. To overcome this it is critically important to continually sharpen hooks to a prickly point so that any fish that seriously takes a shot at the fly or lure will hook themselves. The rule I go by is one missed hit, bad luck, two missed hits, bad hook and I’ll bring it in to touch it up, even if upon inspection it feels good. 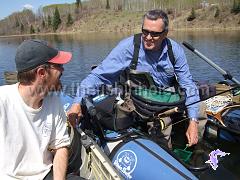 I’ve had a tremendous amount of luck using the long line trolling method. I have found it to be effective for all game fish using everything from flies, spoons, spinners and jigs to plugs with great success. The next time the fish are spooky and playing hard to get, change things up, go long, whether that be with leaders or trolling length, you’ll find a bend in your rod a lot more often.