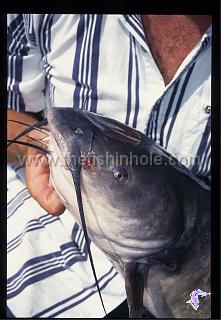 While their licence plates may read "Friendly Manitoba", I've met a number of residents of the Keystone Province who most assuredly aren't buying into the provincial motto. They're belligerent, rude, bullying, aggressive, confrontational and, at times, downright mean. Friendly? Not a chance. I'm referring, of course, to Manitoba's channel catfish, those knuckle-busting, tackle-wrecking leviathans that leave anglers bruised and battered from the encounter.

When an angler mentions Manitoba and channel catfish, the next words typically spoken are, "Red River." And why wouldn't they be? Recent statistics provided through Manitoba's Master Angler program indicate that 90% of qualifying catfish were landed on the Red. Of the remainder, 6% were landed in the Assiniboine River, a tributary to the Red that has its confluence in downtown Winnipeg. The remaining numbers were split between the Little Saskatchewan River, the Winnipeg River, the Whitemud River, Devils Creek, the Souris River, the Roseau River, Netley Creek and Lake Winnipeg.

The statistics tell it all; if you're looking to land a monster channel cat in Manitoba, the Red River is the place to be. And make no mistake about it, the Red's channel catfish, when judged by size, abundance and the opportunity for hooking into trophy-sized fish, are unrivalled across North America. This is certainly evidenced by the number of licence plates lining the Red each summer from Iowa, Missouri, Nebraska and other Midwestern states that hold catfish in the highest regard. These folks know their catfish like we know hockey, and you'd better believe that if they're driving up to fish catfish in our waters it's because we have something that's truly special. 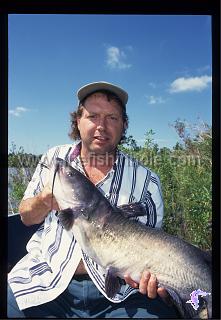 Forgiving her propensity to spring flood on occasion, the Red is a rather innocuous river. It runs north, crossing the 49th parallel near the junction of Manitoba's border with those of North Dakota and Minnesota. It meanders muddy and slow most of the time, winding its way drunkenly through the rich soils of the Province's southern farmland. Sliding slowly into Winnipeg, it neatly bisects the capital city, gaining volume as it leaves, having taken on the load of the Assiniboine. Just north of Winnipeg, the Red meets its only major obstruction, a dam that crosses the river at the Town of Lockport. Below the dam, river waters continue north for another 25 miles or so before bleeding out into the southern bay of Lake Winnipeg.

Channel cats can be caught through any stretch of the Red; I've taken them myself at both Letellier, near the U.S. border, to a point just south of the river's mouth on Lake Winnipeg, and at many points between. But it is the section from just south of Lockport to just north of Selkirk, only a handful of river miles, that has garnered the deserved reputation of producing the largest and most cats. A hot, early summer weekend will see hundreds of anglers fishing below the Lockport dam, some from boats, most from shore and virtually all have big cats on their mind. Seldom will you see less than two or three dozen anglers there on a summer's eve, and the flickering glare of small fires tells you that a handful of diehards are prepared to stick it out well into the night. Don't let the number of anglers scare you; there is plenty of shoreline and lots of fish to go around.

When is the best time of year to catch a trophy channel catfish? Statistics show that 80% of the registered Master Anglers over a recent three-year stretch were caught between May 1 and August 1. It should be noted, however, that there were trophy fish recorded in every month of the year.

The attractiveness in channel cats certainly doesn't lie in their physical beauty. They are a stout, rather than sleek fish, dark bluish-grey on top, lighter along the sides to a soft brownish-grey that may occasionally show a few freckles. Their undersides are an ivory-white. Their caudal fin is deeply forked, but it is their enormous head that gives them distinction while simultaneously making them appear repulsive to some. Their toothless mouth is huge; if largemouth bass remind anglers of "buckets", then a channel cat must surely be equated to a beer keg. Like all catfish (named because of the cat-like whiskers), the channel cat has barbels that emerge on top of its snout and below its chin, with one exceptionally long barbel protruding from the corner of each side of its upper jaw. 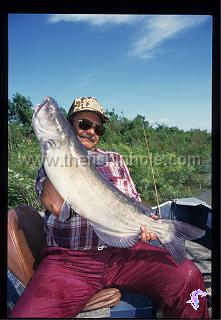 No, the anglers who tackle Manitoba's channel cats aren't looking for a pretty fish. They're looking for a brawl, a back alley, knock down, drag out fight that leaves both combatants a little battered and bruised, but having gained just a little more respect for their worthy opponent. Red River cats average 15 plus pounds, with monsters approaching and exceeding 40 pounds caught annually. An 85-cm cat will weigh 20 pounds on average, and there's lots of them. If we assume that 75% of anglers register their fish in the province's Master Angler program, and I suspect that considerably fewer actually do, there are roughly 10 catfish of twenty pounds or better landed every day between May 1 and August 1. To top it off, most of these come out of a stretch of river less than ten miles long! Now that's a trophy fishery!

Techniques for catfish have historically been very simple, but as with all angling they have evolved to become more complex over time. The old standby is to present a stationary bait to cruising fish; most popular is to use a three-way swivel setup. From one side an 18-inch dropper line is attached to a pyramid weight of anywhere from one to three ounces, depending upon the volume and velocity of the river current. From the other side, a 2/0 or 3/0 hook is tied to a leader that's 30 - 36 inches in length. The line breaking strength of your dropper should be at least five pounds lighter than that of your leader. This will ensure that you won't lose your hook and bait if your weight becomes snagged in rocks on the bottom and you are forced to break off. The alternative is to go to a presentation that incorporates a sliding weight system, similar to the Lindy-rig setup many walleye anglers employ. The benefit to this approach is that when fished on an open bail, a cat can pick up your bait and swim away with it, feeling little if any resistance. The downside to this presentation is that you will lose your entire rig if your weight becomes snagged on the bottom.

A technique for cats that has been gaining popularity over the last several years is to use a slip bobber rigged just as you would for walleye. It will, however, require a larger float to accommodate the heavier sub-surface tackle and bait required. This technique allows the angler to drift or tumble his bait downstream with the current, much as a natural bait would. A couple friends and I put two dozen channel cats in the boat using this system in a little over three hours one recent summer afternoon. The Red is not very deep through much of its channel and seldom would you require more than eight feet of line below your bobber, and often much less.

Preferred tackle for either of these presentations is a bait-casting or level-wind reel on a seven-foot medium heavy rod. Catfish are tremendously strong and know how to use the current to their advantage. You'll need a rod with enough backbone to exert pressure on these unrelenting heavyweights. If not you can find yourself playing a fish of even average size for a length of time that is best-measured in half-hour segments. Most anglers who've spent time tackling these brutes prefer line in the 14- to 17-pound class, though 20-pound test line is not out of place.

While the venerable Red River carries an international reputation for catfish, her angling opportunities most certainly do not stop there. In fact, species diversity is one of the real attractions of the Red. It's not unusual to land half a dozen or more different species on any given day. Next to the catfish, it's the Red's run of fall "greenback" walleye that appeals to most fishermen. Anglers bundle up in their warmest clothes to fish for September and October 'eyes, a period when 10-pound plus fish are not uncommon. Other denizens of the Red's murky waters include bullhead, burbot, carp, freshwater drum, goldeye, northern pike, rock bass, sauger, white bass and sturgeon. In fact, a new provincial record lake sturgeon, stretching the tape to 78 1/2 inches, was taken out of the Red near Lockport just a few years ago.