The Bountiful Bones of Ascension Bay 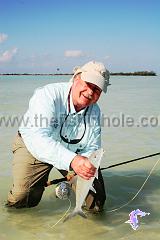 Francisco gunned the 40 horse Yamaha and pointed the prow of the panga toward three specs on the horizon – the Tres Marias, exotic, mysterious, compelling.

Up front the “chico” Jesus ducked under the gunwale and pulled his sun muffler, bandito-style, up to almost cover his eyes.

Ascension Bay had a mad on that morning and big slabs of Mexican sea water came aboard whenever the 22 -foot skiff hit the crest of a phosphorescent wave, showering us with the warm, sticky excesses of the Caribbean Sea.

We passed through a slot in the Marias then powered on toward a green mangrove creek. The further up we went the tighter it got, until the hole in the foliage was only just wide enough to squeeze the boat through.

Francisco was still running about as close to wide open as his nerves would allow and I got to thinking about all the biblical references and how I could use a little salvation about now.

But we bust through into Laguna Santa Rosa without meeting another bonefish guide coming the other way. I guess it helps to have a kid called Jesus in the boat. The sturdy Mayan cut the revs, the solid white boat came off plane and we were there.

Mud, mangroves and a million miles from the craziness of the Cancun to Tulum strip of all-inclusives, five-stars and timeshares.

Yet remarkably, only a couple or three hours away, depending where on the Mayan Riviera you’re staying, is party central for thousands of Canadian sun seekers every winter.

Separating the Mayan village of Punta Allen, where the Ascension Bay flats fishing is expedited from, is two hours of jungle track that’s probably best described as the Alberta Forestry Trunk Road on a bad day.

But traversing the great Yucatan jungle through the Sian Ka’an Biosphera Reserve (kind of a national park) only adds to the mystique of the place.

Francisco beached the boat then led me across a neck of gnarly reef rock to an even remoter lagoon. Barefooting it like all Punta Allen guides do.

At the edge of the back bay the guide froze. Then after a long while, pointed at an imperceptible commotion in a little pond punctuated here and there with mangrove shoots.

I saw nothing, cupped my polarized sunglasses a little tighter around me eyes, and still saw nothing.

Then I did. Three silvery, forked tails broke the surface. The bones were grubbing on the soft bottom of the pond.

Francisco gave me the cast sign, which I did, and the trio of silver bullets blasted away for the deeper water.

I’d lined them. They would not be the last bonefish I spooked on my four days of flyfishing in Ascension Bay.

But history wasn’t about to repeat itself in the next pond down.

Except this time there were four bones working the skinny water. And when I got the cast in front of them, and Francisco said “my friend, streep, streep”, one broke away from the pod and followed my shrimp imitation that was bumping enticingly along the bottom.

“Streep, streep,” Francisco urged. When I tugged the line tightened and I set the hook.

This is when a lot of things happened in a very short period of time. The bone departed in a reel tormenting run that, even with the drag cranked down, saw it go well into the backing before I got it snubbed.

Several runs later and a lot of drama in between, I was amazed - as I always am - when I saw the size of fish that was gasping in Francisco’s beefy hand. He removed the Punta Allen Poacher fly that my Red Deer River guide buddy, Garry Pierce ties. It’s amazing the amount of go in a fish that probably didn’t weigh more than four pounds. It fought like 10.

There would be flats fish and lagoon fish and cayo fish and fish in a running tide as swift as a mountain trout stream, some of which I even managed hook.

One memorable morning when the wind layed down on Ascension Bay we fished along a sandy bank that had been sliced and diced by Hurricane Dean in dead flat water.

And the bones kept cruising by almost non-stop all morning. Until the tide turned and the wind came up and it was done. That is another quirk about bone fishing that is hard to get your head around for a western Canadian trout guy. Bonefish constantly move. Trout generally don’t. So blindcasting to them is pretty much a waste of time, energy and sanity.

Another cold, hard fact of life that’s difficult to take for an independent-minded, never-ask-for-directions westerner, is that having an extra pair of expert eyes in the boat is more or less indispensible. This is especially true when they announce “nervous water coming” and are pointing at some impossible-to-see spot out near the shimmering horizon.

Even when you finally do see the fish and launch a cast their way, you’re not sure whether they’re for real or some paranormal delusion. That is until they eat your fly and head for Belize. Punta Allen is one of those end-of-the-road kind of places where there’s just enough time between when the boats come in and the town generator is shut off to wander down to one of the beach restaurants with tables set out under the palms, full of ex-pats and fishing guides, for a meal and a margarita or Dos Equis or two.

But heads up for the falling coconuts. 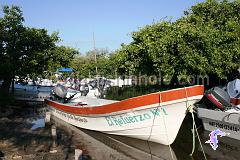